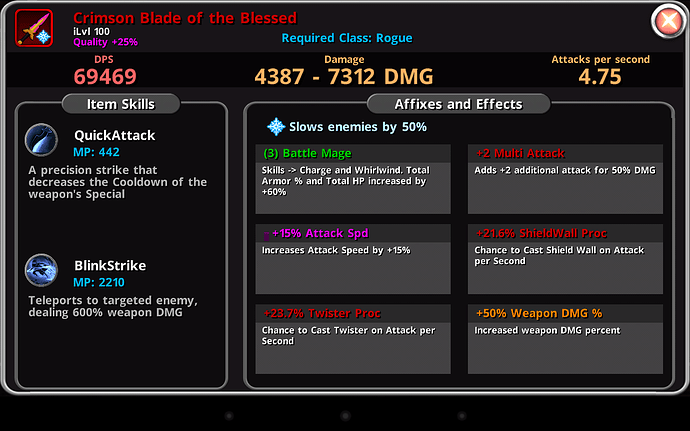 It isn’t just about the weapon you have. Once you get all of you gear centered around your main play style you’ll see it all come together.
If you need to, drop down to very easy and boost your loot affixes.

Easiest way to increase your damage reduction is to change class… The other way woukd be to use dodge and try to keep opponets as far away from you as possible reducing the hits that you take. As a rogue theres no point using armour because there are no boosts for it

There isn’t a pay to win mechanic of this game. There are pay for luxuries, like the boosts, but it doesn’t guarantee you to be above the rest of the players which isn’t p2w. Buying extra character slots isn’t p2w either. It is a luxury…

IMO each class have potential in damage and surviving. as player u are able to craft , tuning your equipment to what u think is better for your playstyle. Me personally don’t think any other will be better than damage & damage booster on campaign mode since the higher floor u play the higher damage they (monster) deal on u. that will make damage reducing ability will be not necessary since soon or later on high floor they able to 1 shot your toon. For me, the best affix to have for surviving is dodge and block (only for warrior). best mythic to have for surviving is vanish and senctuary. the best special skill for surviving is twister and stealth. the best play style for suviving is kill them as fast as u can while dodge and block all attack, if nothing touch u then there is no way for your toon to die unless ur toon have heart attack and shocked to death when found extreme rare legend lol.

Lol I’m now able to go floor 300+ because I found an eternal boundless cap and cataclysm ring (what I wanted) and should I respec hero points and stats to change ? What should I take in stats ? I am full power (lvl 95) and in hero points I have quickattack and blinkstrike lv 20 + the things in the bottom for your character at 5-10 lvl what should be better ? Upgrade just attack or resist or the 2 ?

That is so true what you just said