A Moment to Remember! Also I have Suggestions ^_^

Atlast Im the top 1 in Arena even though its just small gap with the Rank 2 and Rank 3. 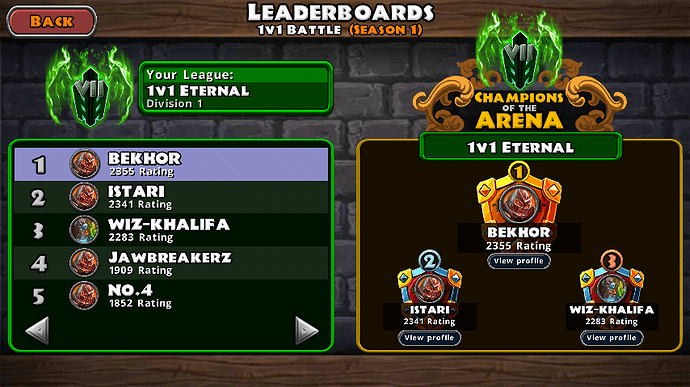 By the way. @Refia @tdaniel @SteigerBox. Can I have a good suggestion about the Top 3 in Arena? Can you put atleast some costume or Aura Effect or some rewards when you reach top 3 in Battle Arena? So others will encourage to fight for Top Rank in Arena…Like other games when you are on Rank 1,2 and 3 you have pretty Costumes and Auras… Thank you for accepting my suggestion

Congratulations! That is a good suggestion. I have barely played in the arena since the second season started. I need to get back into the groove and craft something usefu for the arena. Keep up the good work!!

Nice!
Rewards for reaching top 1 once would be nice (for example cosmetic). Would start doing pvp battles again

Will do anyway after the patch probably with new items maybe.

@Mr_Scooty and @Msiiek thank you very much really appreciated it.

I dont even have a chance to defeat you in 2v2 totally no chance at all LoL. I dont know why your so tanky… On 1v1 your also my big wall when Im at the middle of Eternal League…I still need 5 to 7 Draws to increase my Power to totally ripped off your AI.

and @Mr_Scooty who are you in Arena?.

@Msiiek your at Top10 right now. Im facing you even though I dont get Battle Points when defeating you. Aside of Istari your the HARDEST one I fight on my random enemy search… It takes 7 to 8 draws to defeat you… If draws doesnt give +25% DMG increase, I dont chance to defeat you again and again. You just have 192k HP and 400+ Power but you really hurt me so bad… I cant fight you face to face. Thats why Im just use Charge and Spam CosmicOrb + Scalp far from you .

congrats keep it up

Thank you and you must be proud of it @Eater…

Proud to be Pinoy!

wow what a great surprise

thank you for using kraken as your base build. It keep me motivate to do a new build to beat it