Can someone please explain to me how Mythic Harmony works? I do not understand it fully. I’m confused about the description in the Dictionary. Thanks for noticing.

I’m still somewhat confused in the process of Harmony works haha. But I do get it now. Thank you so much sir.

Heals HP by 25% of Restored MP

Restores HP by 25% of Healed HP

Although it also does it vice versa according to Mythic page of dictionary.
With Regen and on hit effects, Harmony works the same way except it ends up calculating more based on how much you regen or HP gained by hits and can be very effective. 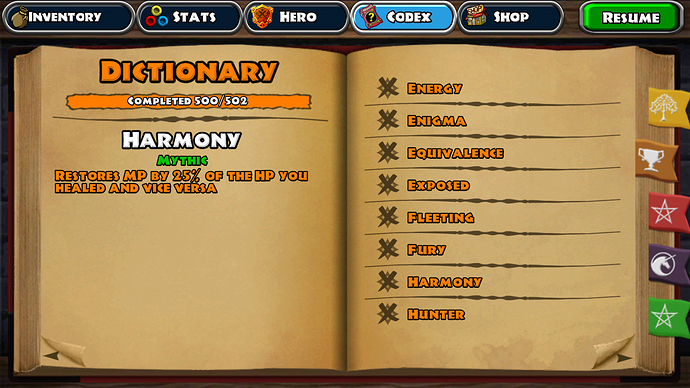 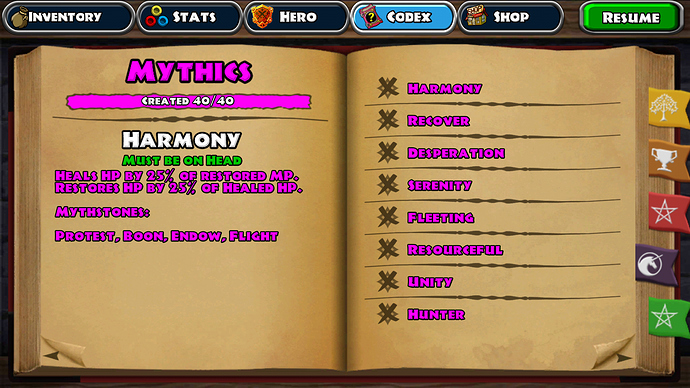 I almost called it a mini alchemy based on how it works on my PvP build for regen but it doesn’t do it justice since Alchemy deals with HP and MP as a resource system instead of just MP and alchemy would do it in 100% rather than 25% like if you gain 2000MP with mp absorb , you also gain 2000 HP.

Alchemy has the other issue of being most effective if you can equalise HP and MP and if your low on HP, MP is treated like HP and MP. Or the other way where if low on MP, HP is treated like mana. Immortal build does use alchemy because it can act like doubled HP as both are resource systems that work together. MP Absorb , Regen and looping to heal back HP and MP to prevent death.
That’s not to say Alchemy + Harmony isn’t possible, it is but its up to your build and to decide whether its worth the slots. Harmony could be one of the other boosts to alchemy just like HP on hit, regen, or other factors depending on the build you make.
I used harmony + Permafrost Bonus + Druidic bonus and high AR on my discordance orb rogue with some damage to make it tanky. I don’t get the same effects as immortal build but it sort of is there.

oh! does Harmony work with MP Absorb? I was wondering about that and was contemplating doing some testing, but if you know, please share!

cool! I have a build in mind for PVP, using some of the info from Mr. Scooty’s Immortal Reveal Thread.

Many thanks guys! I’m thinking what you’re thinking now @Golem

I do get it now. This is so awesome. Additional learning again

Thank you so much sir @CuzegSpiked