@cronos4321 @f00kee could I get some help with this I’m trying too figure out what went wrong here and you 2 seem too have the greatest level of in depth knowledge of affixes that are particularly active on the forums (excluding SteigerBox box and the other devs but developing the game is cheating : P <3) 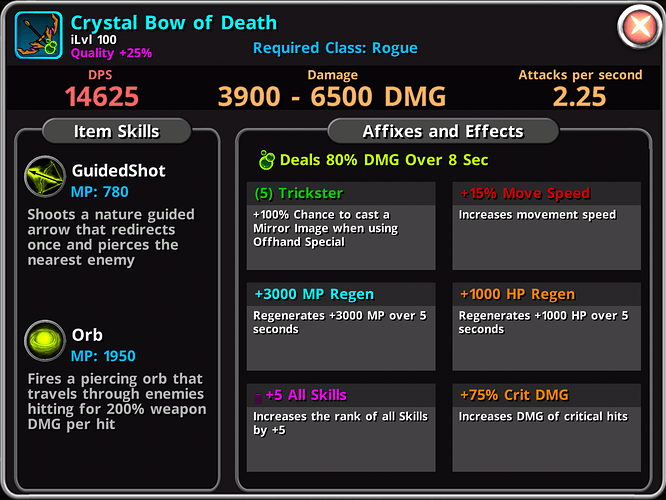 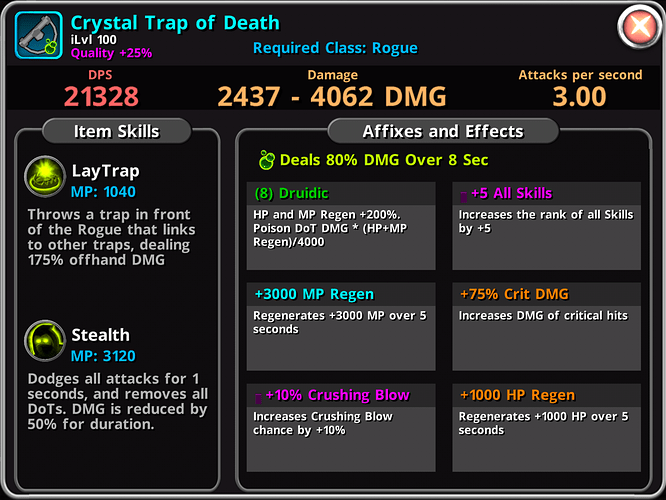 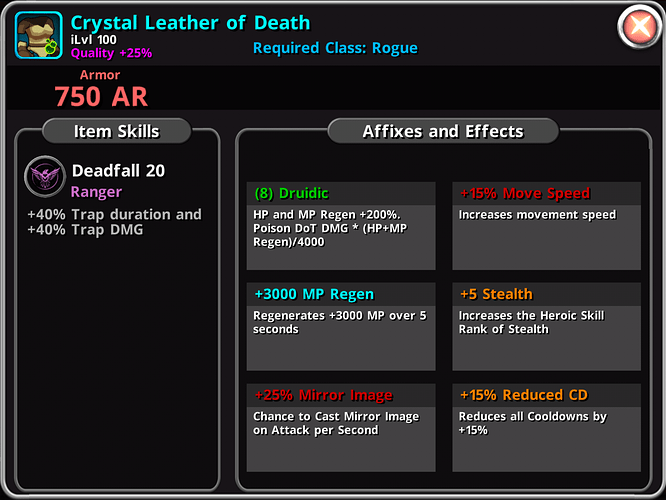 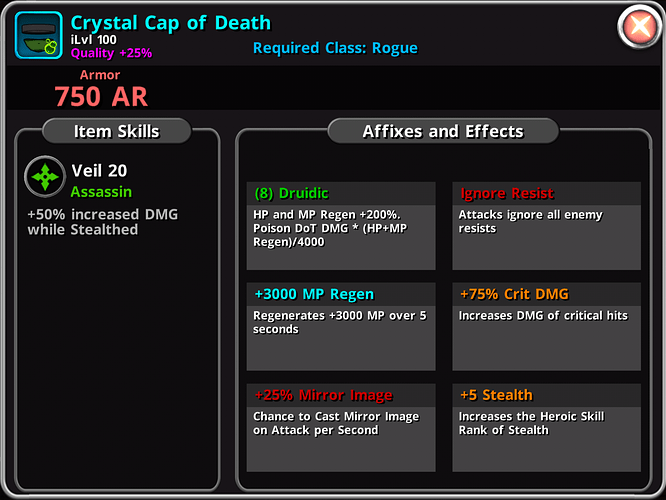 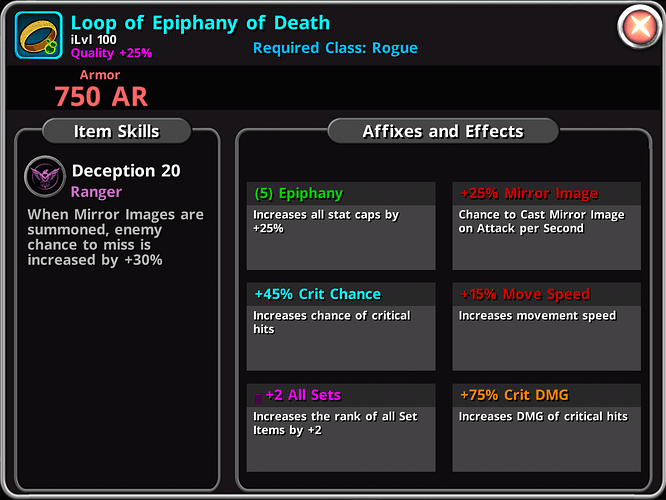 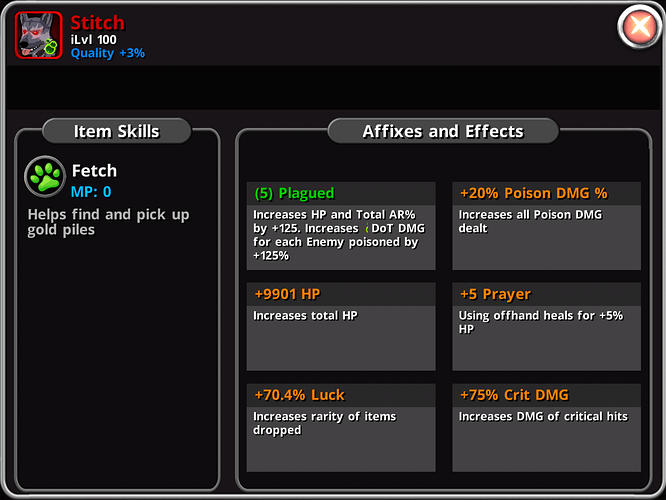 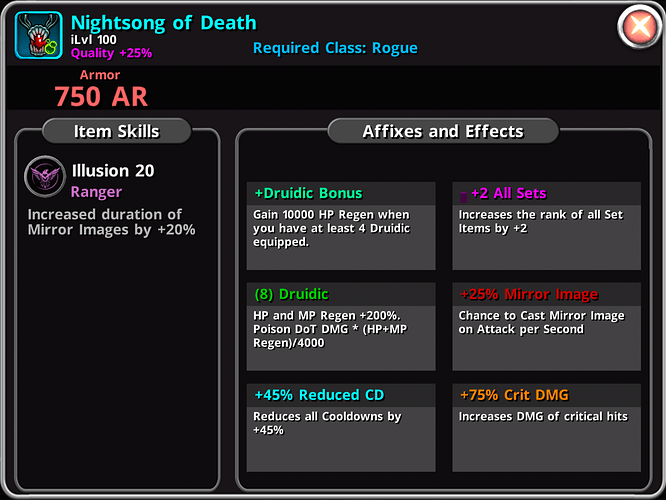 Screenshot_2016-03-24-22-13-20.png2048×1536 968 KB
OK now in theory based on my testing around when damage is calculated this should obliterate everything in the game no matter the floor any clue as too where the affixes are going wrong and what I’m not acounting for? I’m thinking it’s the lack of blight+elemental critical because of the formula for crushing blow against higher tier enemy’s but I’m not sure
Griffin March 25, 2016, 4:50am #2

you have a very high poison dot multiplier but there is very little base damage. so you have to rely on crushing blow which won’t be able to kill higher tier enemies like you said.

also, i’m not sure if crushing blow can cause poison dots. my understanding about crushing blow is its just an additional attack to your original attack. say you deal X poison damage with an attack which triggers crushing blow on a regular creep with Y hp. the damage you deal will then be X + 25%(Y-X). but the dot you will be causing will just be based on X and not consider the 25% dealt by crushing blow.

Noooo!! What have you done with Loop of Epiphany…
RIP Legend ED%

DoT is % damage per tick base of original damage that cause it for example if your guidedshot deal 100M, your poison dot will deal 10m per tick. then if use druidic and have your DoT deal ×15. your dot will deal 150M. as i see your build leak early damage multiplication. u need to understand there are 2 stage in multiplying, early stage and last stage. for early stage it mostly the one that effect your attack right away for example momentum, advanturer,Defiant, pathfinder, Energy etc. the last stage is the damage after your hero/toon deal damage. example of last stage is explosion, frozen set, plagued set, frosrbitting, highvoltage.

IMO early stage is very important, u need super damage to multiply on last stage to make it deal super duper crazy damage, last stage not really important because the damage is loop and will grow by it self.

Thanks for the advice cronos

just hit for over a trillion damage for the first time

Congratz. Hope things will got better and better for u.

Just like what others said, this lacks base damage. Another thing is, giving up 3 Set Affix to get 10,000 HP regen is not a good choice. You could get the damage multiplier that you need from those 3 Set affix

Another thing is, giving up 3 Set Affix to get 10,000 HP regen is not a good choice. You could get the damage multiplier that you need from those 3 Set affix

This is my issue with the current dependent affixes. They just don’t seem strong enough when they’re based on number of equipped sets. Maybe the 7DS because there’s so many of them with the same dependencies, but the rest are so specific and require giving up so much!

The only reasonable dependent affix i’m currently using is Epiphany Bonus without giving up too many slots for other affix.