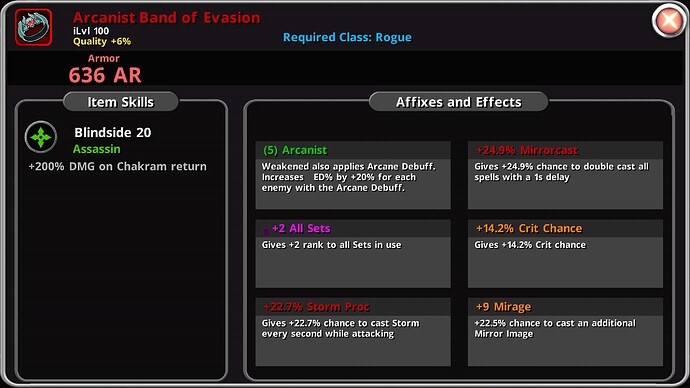 Not exactly i dont think… I’ve not tested this as much as I’d like to, but pretty much you apply weakened to an enemy, and it gives you 20% damage boost… idk if you can keep applying to boost to the same enemy or if it needs to be arcane or anything like that…

yes. it used to require a Critical Hit to apply the Arcane Debuff, but now you need Weakened. since you can get Weaken 100% or better, that’s better since every hit applies the Debuff.

I think you need at least one +20% Elemental Damage affix on your Build. sure, you could go +600% ED, but it all depends on your Build.

this build does great the more enemies that are affected by the Arcane Debuff. the Debuff lasts 5 seconds after applied. Arcanist (5) would give +100% ED% for every 5 enemies Debuffed.

since I believe the damage is multiplied by how much ED% you have, if you have +200% ED on your Build and Debuff 10 enemies, your ED% is now +600% ED%. if you sped across the map to the Cartographer and Debuffed 50 enemies along the way, plus any enemies near the Cartographer and the Cart. itself, that would be around +2000% ED% times the ED% on your Gears… if you get there in less than 5 seconds.

my play style doesn’t make very good use of Ascendent & Arcanist Sets, but I have used it to great effect, especially on Pack Size Maps. I actually just thought up an Elementalist Wizard Build for both Staff/Comet & Wand/Barrage with huge DPS using this Set Combo. still need to build them, but the math shows I can get up to the Tens of Billions DPS.

Ascendent Set randomly changes the Element of your attack, and any Element can apply the Arcane Debuff. I had an Ascendent/Arcanist Build with Crushing Flames & Frostbiting that did lots of damage.

Yes, it still working. I have my Aftermath Proc build using Arcanist-Ascendent Set but its not doing good at 3.5k floor maybe it needs a little tweak but im lacking of crystals now.

from the way Aftermath works, it might be hit or miss when it comes to getting lots of damage from Ascendent & Arcanist combo. maybe add Reactor Set with Orb Proc? the Arc from Reactor can reach out to distant enemies and Weaken them for the Arcane DoT for extra enemies giving you more ED% damage when you Proc Orb.