Ok so started playing pvp this week, and have grinded my way to Mythic League, 43rd rank and level 20. The problem I’m having is how I’m supposed to beat people with arena skills like silence, root, etc…
These skills come from arena rewards, I presume eternal trophies, which I also assume only drop from eternal chests, which I can’t get because I can’t get to eternal league. Catch 22.
I’ve saved 10 legend chests, 42 epic chests, am I wrong and can get silence and other arena skills from legend/epic chests?

The problem I’m having is how I’m supposed to beat people with arena skills like silence, root, etc…

Whats dispel and why is that funny?

In arena in place of hp and mp potion you have dispel (on the left) and skill from trophy (on the right). You don’t need eternal chest to get a trophy. You can get a trophy from rare chest but it can be a blue trophy with 3 affixes but it will still have silence/root/slow etc. With legend and eternal chests you just have a chance for legend eternal trophy with Gladiator set. Play more pvp and you will get yourself a legend trophy, eternal might be much rarer but if lucky it can be in your first eternal chest. 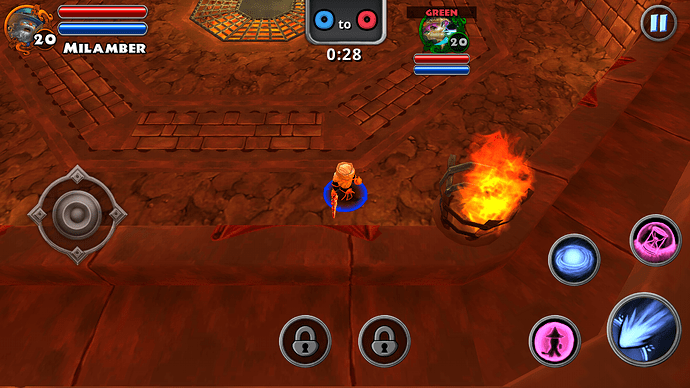 So which of those two locked icons are dispel? How do they unlock?

You need a trophy equipped. They drop from every chest you get from the arena. Just got eternal trophy from epic chest lol

but the same as I have.

Mostly Rogue gear I can’t use.

They aren’t common but they do drop from every chest.
When you open the chest try to opent them at floor 500+ so if you get eternal item it will be lvl 100 for sure.

Thanks for all the tips… and I did.

Also open them with the char you want to items for. If you use a Rogue, you will only get Rogue items.

Always. Concentrating on bug finding and other things though.

You know, besides this convo taking the thread way off topic, I’m getting notifications each time one of you reply, because I care to follow my threads. There is a built in Message feature to this forums where you could have this convo privately… just needs one of you to touch the others name and then the “message” button on top of their profile…