Grinding when the player hits an uber-wall may be unappealing to some, especially to those unfavored by RNGesus. The idea is to grant permanent, toggleable incentives upon reaching certain floors as a viable but not as effective alternative to low floor grinding. This will also encourage players to strive for the highest floors and play smart for the long-term benefits they can obtain. May be as simple as a permanent gold+luck boost excluded from the normal cap, permanent pack size bonuses, elite spawn bonuses, etc.

For the most part, these blessings bestow more streamlined dungeon crawling pleasure

(NOTE: The blessings cannot be acquired on maps lower than EP8)

Values in brackets are determined by RNGesus 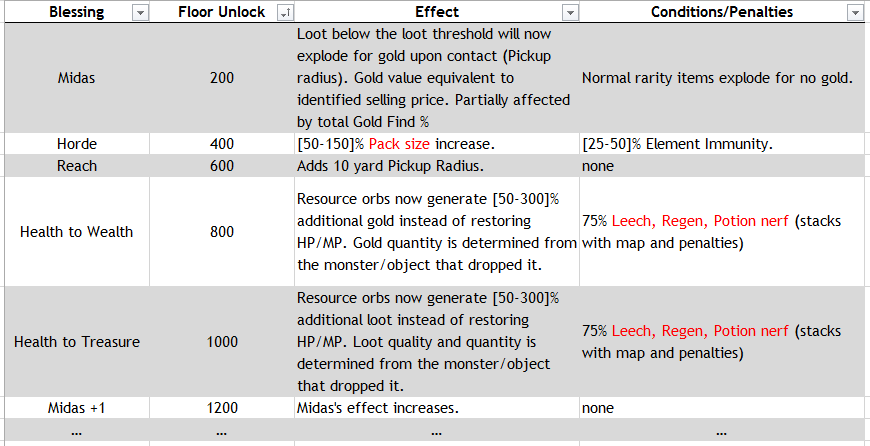 This sounds like the old challenge system to me

It’s roughly a “buff” each floors?
Well it would motivate players to go further, i’m kinda okay for it, under conditions

It’s roughly a “buff” each floors?

That’s an accurate way to summarize it, yes

it would motivate players to go further, i’m kinda okay for it, under conditions

Yes, conditions. These circumstances will make or break its viability for balanced gameplay. If ever, this should be the focus of this would-be feature.

How about you post a list of all the different ideas for the bufffs you can think of, it could be useful.

How about you post a list of all the different ideas for the bufffs you can think of, it could be useful.

I will sort out the ideas in my head, then I will edit the first post

I think you hate tnt props and skyfall.

Those were just some examples to get the ball rolling, the numbers and penalties and whatnot are to be adjusted of course

if skyfall and tnt nullification is that horrible, hey maybe more penalties are in order. Was supposed to be toggleable stuff for more gaming pleasure, sacrificing something else in return.

As long as you guys get the idea… but I think 500 floors per unlock would be too much grinding. Perhaps 200 would be best, as the main dungeon crawl acts end at 200.