At the moment I am able to farm floor 500+ with both my warrior and my wizard as a main, with ranger on dps build.
Trying to make this build to be able to farm faster/change around when I get bored of looking at the same animations.

My next goal is definately to farm enough currency to tweak a pvp build.
Just need to find a build that makes it fun;)

I see. That’s good idea. Well I do think of changing my farm build every x amount of months. I used the fortune bringer with aftermath wizard for ages and I have gotten bored of it. Now I’m thinking of using flintlock rogue or discordance rogue farm build with a powerful interesting warrior build and swap it around with an interesting wizard as well. I mean as long as you find it fun, that’s what matters.

Lord Cuzegspiked can you link me a nice farming build for your discordance build? I have a hireling warrior so what build will I make for him and my wizard ad main , I want the discordance order with frozen , just for the twist ( electric from midsummer )

I’m in the middle of building one but RNG troll me and 10 obsidian for gold find and still no gold find. I do have a great formula of farm affix order which is efficient but this is for epiphany. Without epiphany, it’s a breeze.

Obviously I’ll use frozen as plagued is slower and I was already bored of plagued even though I’m using frozen now. Of course there’s the obvious Arcanist+Ascendant too for higher floor farming which I hate the most but is why in trying to make high Dmg farm build.

It’s a wizard Discordance twister farmer with my current wizard aftermath farmer I already have. I’m of course making a rogue Discordance one too but yeah. I got a shit ton of work to do to create more farm build and make em proper farm build. Also gonna spam hunt so many gear that I need because this will be the most expensive build projects I’ll have ever done (farm builds are the most expensive ironically). I’m of course already content with my current farmer which is fortune bringer with aftermath farm wizard but they are boring to me after using for a year and it’s not that good so that’s why I’m trying to improve all 6 character.

The hirling obviously will deal a lot of dmg because the only slots they lose are 4 slots for item drops, 1 crystal affix slot and the epiphany set slot is a gain . 10/10 will make. I just need lot of luck and I haven’t really planned it well enough until I try putting it together.

Also thanks for calling me Lord

But where should I make as the killer one ? My main or my hireling? And my what perks do each toon. Need?

Uploading… here they are , a y suggestion?

hello guys, i need to check something that i think people would not know about

if i delete a character and place it’s equipment in the stash before i delete it , if i create a new character could i access the
equipment that i got store up if i brought the stash again? thxs

why did he use shock as the element instead of other elements, any particular reason?

also for the chest which Mythic is better Exposed , Skilled, or Brutual
who ever is reading this have a nice day

When you use Primary skills like guidedshot, ricochet, boomerang and quickattack choose Skilled it adds 50% Primary skills damage. When you think about to deal more damage on Deadly Strike choose Brutal (3x Deadly strike instead of 2x). When you have a skills with Piercing like Chakram (Rogue MH Special), Sword (Wizard MH Primary), and warrior i dont know haha. And after you delete your character, move your fav. items on Stash before you delete then you can proceed, create new, and here you go your items is Safe. And the question you talk about why he chooses shock is because Shock can Dmg debuff% which you can Deal more damage on Shock only (And i think its his favorite element.)

How is it possible to make such things?
Only have this and don’t understand how this will be really good? 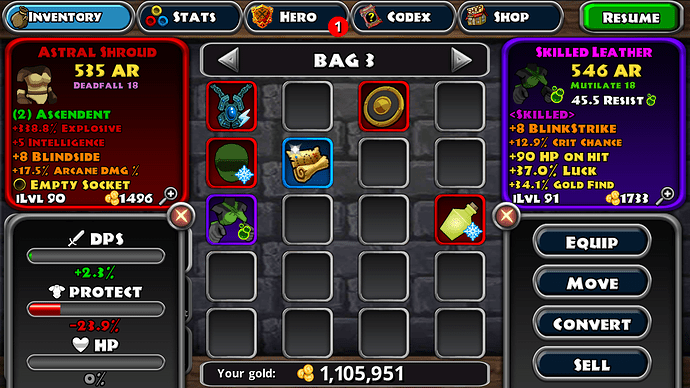 I’ve only just started playing for a few weeks so I’m still not pretty clear on things, I’ve managed to get to floor 500, and have got most of the gear sorted. I haven’t been able to find the defiant trap yet so still working on that.

My real question is how hard is it to get the shock affix you have on most of your pieces? I’ve used around 40 Ruby’s so far and haven’t seen any dmg% mods at all.

That’s because the dmg% doesn’t appear on ruby. It’s only found by gear dropping.

ED% cannot be found on ruby as well as WD%. Only way is finding certain legends and modifying them to your own build idea or copied build.

Weapon ED% for Mainhand: Immortal Flintlock for Eternalized or Glinting Dagger for Crystalline. Eternalized and Crystalline items are found at floor 350 mythic 3.

Mythical items are found on very easy mode to mythic 3 on floor 350 though.

Chest ED%: can be gained from Aether Wrap on very easy mode to mythic 3 at floor 400.

Cognition Ring ED% is found at floor 400 mythic 3 which originally has Cerebral Vortex . Also has push the Limit and a very valuable ring and the ring RNG will troll you the most.

Amulet ED%: Entropic Jewel with Mayhem set affix floor 750 Mythic 3 I believe or maybe all difficulty. or the Haunting Amulet from rogue at floor 200+ which also has ED% but mythic 3.

The elements set with the Sword and the Frozen Shield both having ED% as well as Mutiny (could be flintlock). Also Nadroji bonus robe but that’s not always worth it. Seven deadly sins does count but they won’t be used for builds other than a seven deadly sins build.

Offhand WD%: Rage set Shield , Zealotry Set Shield, Smoke Screen Smokebombs . These shields or smoke bombs can turn into orbs with WD% as well.
Also Hunger trap which can be jaspered into Skull or Horn with WD%.

Ah, so all of his items that have the shock dmg on it he found them with it first, then changed the other stats?

Kinda thinking I’ve wasted a lot of orbs then, I can kill but I kinda lack dmg on floor 500+ m3

Use high attack speed if you using flintlock, 5000 weapon damage especially because flintlock has lower base damage which is compensated by WD and attack speed/APS.

Since flintlock is primary skill, using 4 Multi attack and 4 Extra Attack is vital as well as 20+ hero points in flintlock and even the skilled mythic. Then 1× Push the Limit to further raise the Mainhand % of flintlock. Of course using Mutilate Talent is must have on rogue if you have Multi and Extra Attack.

You’d get 2000% MH damage of Flintlock and you have multiple bullets+ fast attack speed ftw.

Then use Glasscannon 50% or even Barbarian or both. If you use barbarian, one mana affix or so will be needed to compensate but it’s worth the huge damage boost.

Use this build but Frozen explosions or Fire build or even poison build.

All ice , Frozen Set, use Crushing Blow 30% , deadeye affix. If you have deadrge affix , remove 30% deadly strike and replace that with the 30% crushing blow to do well in high floor farmings as crushing blow goes great with high attack speed flintlock and the explosions could be kept.

Maybe Epiphany bonus could get used if you wanted epiphany part of the farm build which is simple to achieve.

Keep the farm affixes though and you have hirling as well to help with farming by putting luck on hirling and item drops.

Another good set to use is Demonic to go with Relentless Talent or as an alternative to Relentless when he uses rebound. Or adventurer to go with momentum.

Obviously he uses stealth but add dodge crystal affix 30% and some power 299 since stealth has changed to require 50% dodge for 100% dodging since it doubles current dodge and it goes without saying that stealth 20 hero points is must have.

However momentum + Demonic would be even better in terms of damage and goes great with crushing blow and especially if you ended up using Relentless instead of rebound for whatever strange reason.

Many more to be said but it’s up to you to see how you can improve the build.

This build was made a while ago but good thing it can improve a bit. Also not much need for more than 400% explosive. 400% is enough tbh.

Thanks for the help, I shall have to re-do my build, I’ll just collect up more crystals for now. I didn’t understand everything you said since I’m pretty new but I’ll try and figure it out

. I was in the same boat once though but I’m sure you’ll understand

Look at codex for certain legends and definitely have a look at SHTT guide:

Good luck on getting more crystals.

Can you even get shock dmg from cristalling the affixes or should i craft other classes versions of these items and convert them?

What do you mean with that?

If you’re asking wether it’s possible to get +% shock dmg from oyxes the answer is no.

The only way of getting +% [element] dmg is from epic affixes (which can give you a maximum of +20%) OR as on legendary items that you can craft or as a drop from epic monsters (nadroji robe dor example). Legendary +% element dmg can go up to +100% so it is MUCH better than its epic variant.

This build would be so much better in poison or other elements but shock isn’t so bad.

hey are those items a drop item?? i have a cyan collored golex gauntlet… cant find info in the codex… just a noob player…

all of the items in the original post are items that need to be found, either because of Set affixes or Legend affixes that can’t be rolled with Crystals. it looks like none of the items are Eternal items, so he only kept 1 or 2 affixes from each item and rerolled all the other affixes to what he wanted.

Crystal Affixes: there are about 20 affixes that can be Crystal/Cyan. they are triple the value of the Epic version of the affix, except for HP/MP on Hit, which is only doubled. as I stated earlier, you can find items as loot with these affixes or roll them with Obsidian Crystal.