Welcome to a good Rogue build that requires minimal crystals and luck! Unfortunately, one of the Legends got nerfed in a past update, but should still work.

Not really any rqs here

With my bow rogue’s pathfinder build, the idea is to avoid taking damage altogether. Therefore, a max dodge % is a neccessity. Since we have so little armor and hp anyway (effective hp is below 100k), we ignore hp leech as we can use hp potions instead if we get to 60% or less hp. The main thing here is you want to max Guided Shot’s heroic skill and the Fletcher talent. You can get damage up to the millions if you build it right. Still, a weak build in terms of end game.

Unfortunately, since I’m running the testing build, I annot show any pictures.

oh and i was wondering if i can make this build more stronger like should i change my defiant chakram , chest , offhand , or anything to mythic. I did change my nadroji amulet to sanctuary because you know , the monsters on floor 200+ is so strong so i need to get sanctuary so i can survive

oh and i have a question , does 1 elemcrit ( i think that’s what it called , you know the toxic affix ) is enough for the build or should i put some more? I currently have 14.7 toxic from my plague OH and i was wondering if i should put some more to increase the chance of triggering the poison cloud or should i just put blight affix? Im so confused because i saw someone put blight affix to all of his gear but i dont see a toxic ( elemcrit ) affix.

most players just use 30% Elemental Crit (Legend. this causes Elemental Crit for all Elements, not just one Element like the Normal (orange) affix does) or 2 15% Toxic. if you have a slow attack, maybe go up to 45%.

Blight just increases the damage that Toxic does. it doesn’t increase the chance of causing Toxic.

at higher floors, Dodge, Block, Sanctuary and other methods of not getting hit are better than lots of HP, Armor, or Resist, as at higher levels, you can get killed by one hit eventually.

glad this build is working well for you. this post is over 5 years old, and there have been many changes to the game, so some of the game mechanics might have changed for the better or worse since this Build was posted.

Oh okay now i get it

thank you sir ! Oh and i just wanted to share this , ive been making my own warrior build for farming but looks like i accidentally make a pvp build than pve build

( its still good for farming tho , because of this build , i can now fight monsters in mythic 1 difficulty , the dmg is reaching up to 20 mil and i was surprised because i never reach that dmg before

)
It’s really fun to make your own build , btw this build of mine helps me to go up to mythic league lvl 24

Oh and i have a question , is masochism set good for wizard , warrior , or rogue? I just got 3 masochism MH weapon , one for warrior , wizard and rogue and i was wondering if its better to use them or just keep them ( oh and i have this crazy luck yesterday , i was just messing around with the vendor items and i bought the legend sword hoping that it would be eternal fabled blade or etc. And i was so surprised because that sword was Meliodas’s Hilt ! That sword can only be found on floor 500 , mythic 3 difficulty and here’s me , got it from the vendor ! 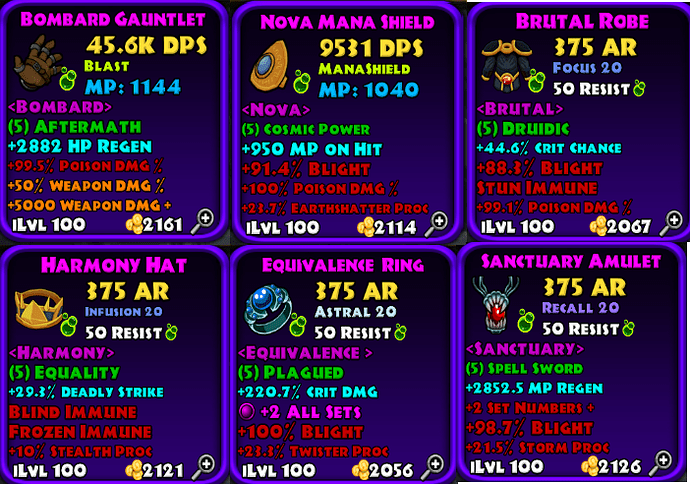 This is what i was talking about sir ( this is not my build btw , i just saw this from the forum , i just couldn’t remember who own this ). He does have neither the toxic affix ( elemcrit ) nor elemental critical , so im so confused why he he has blight affix but no affix that can trigger it

He has the Nova mythic on his Manashield OH, that gives a 30% chance to cause an explosion which applies elemental crit to targets in an AoE and will cause the blight acid pools (poison elemental crit) to spawn.

Nova has a 30% chance to Proc, and when it does, a 100% chance for Elemental Crit. with 2 Master Myth Stones, he can get it up to 50% chance to Proc. as of Patch 3.0, instead of a chance to Proc every second, it is a chance to Proc when it has finished it’s Cool Down. unsure if it can Proc in less than a second if you have high enough Cool Down affix, as that is something I haven’t tested yet, but I really need to.

also, as a Wizard, he could have put some Hero Points into Storm, which gives Storm a chance to Elemental Crit based on it’s Rank.

Masochism isn’t a really good Set by itself, and requires you to have some HP, which it tries to keep at about 50% when you heal in any way. if you use it with either Defiant Set or Blood Magic Set/Mythic, or both, then it’s really good, as it keeps your HP around 50%, which lets Defiant & Blood Magic do lots of extra damage (their damage is based on having your HP lowered). Defiant would go from doing +25% dmg to about +37.5% dmg with Blood Magic doing +100% dmg, when your HP is around 50%. since your HP will be going up & down a lot with Masochism, your damage will fluctuate up & down also, but it will usually be around 50%. against monsters with Thorns, since that could drop your HP by 90%, that just means more damage until you kill it/them.

The nova cooldown is 1.1 s if you have 75% cooldown but still pretty good cooldown tho.

are those items with immune affixes still used in pvp right now, I mean the veteran players still have them right? or they were changed along with the patch 3.0 just curious.

I fought so many players in pvp ( currently on eternal league ) but i haven’t come across someone that has immune affixes on their gears , and i used a bunch of rubies but i haven’t seen a single immune affix ( only those stun , freeze resist ) and i dont know if they removed/changed it in patch 3.0

I think the Immunes were changed to Resists. I believe they can be rolled with Ruby (at least, I have seen them, but I haven’t made a build that uses them in PVP), and basically, they can help builds resist any enemy CC used against your character. but they do take up space and you never know if an enemies character will use any CC against yours.

I did found someone that have taunt immune but it should have been changed and I assume that the player did’nt update the game and quit.