Much better to farm many many Crystals first to make your Perfect Build . 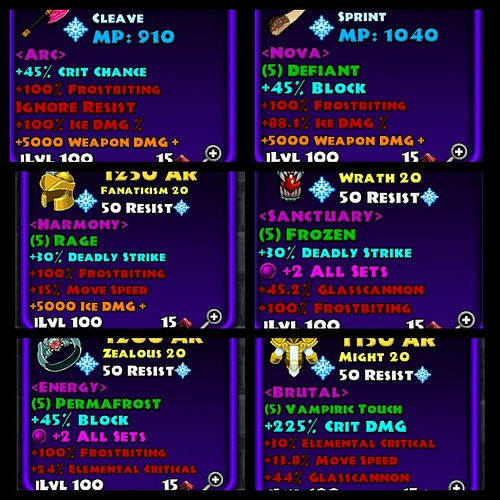 Nice build . That’s basically the Hachimon warrior build lol. However energy is not a good fit anymore than it used to be since you need to drain energy to gain more % damage. It’s recommended to go with something like Alchemy/Fury or bloodmagic or anything that adds % damage as a resource mythic.

The main attack I know very well is the sprint attack. This build was made a while back in patch 2.0-2.1 by Cronos and to improve, you can add 100% WD to the horn from the Hunger legends such as Hunger Trap and Jasper it to warrior.

Arc is a good mythic though but you can also think about cosmic orb if you like .

Set affix improvement being: Momentum, Permafrost, Frozen , Demonic , Pathfinder , Adventurer and Defiant or other useful set affix. You could even go for a crushing flames type with this build. Heck even epiphany if you want to go for 100% block/dodge since you can do that now. Although rage is still a good set affix if you want to save some slot .

With that high block from epiphany, add dodge (which also works with pathfinder for damage) , bulwark talent to accumulate the block to 100% or so and the dodge remains 60-75% .

Stealth would no longer be too useful for this build since it lasts one second but when you have over 50% dodge, it will be able to protect you from all damage by 100% dodge for 1 second which can be useful.

Take a slow bru. Kinda new in game. Hahaha. So basically ill change my ring with bloodmagic? And which set affix shud i change? My OH?

Wait these were just suggestions. Oh and I forgot that if you were to keep energy, you can use push the limit to your advantage to increase MP cost to increase damage.

Sets can be relatively the same but change 2 to pathfinder and demonic if possible. Dodge instead of the 2nd block . A crushing blow instead of the second deadly strike. If possible, make sure to leave a set affix space on the axe if you have room. Or instead of pathfinder, you can use adventurer to combine with movement speed of your sprint.

Im newbie bruuu. I need ur suggestion. Like wat u rly wan on that build. And i guess i can figure out for myself abt ths stuffs. Just need a starting set to do floor hiking

I can go with my armor with pathfinder? And my ring with demonic ayt? But how can i get thr ED% on my armor?

Yup. ED% on armour can be obtained by the legend called Aether Robe (Aether Wrap) . This robe can be found on floor 400+ on any difficulty, including very easy mode.

WD% on horn by Hunger Trap which you can switch class into warrior horn. That’s found at floor 800+ though but it will improve it.

Same mythic on armor but ill change my ring mythic with blood magic? Wat ya think? And grt crushing blow and add dodge

Up to you. I mean you can keep energy but bloodmagic works well too since it increases damage to 200% instead of 100% when you have lower HP. I realise that you’d have to spam to lower the HP like you’d do with energy but the HP cost is doubled and push the limit makes that even easier.

Energy mythic + push the limit affix is another idea which could work better. For the head mythic, remove Harmony affix since that isn’t effective with the energy mythic and it would fill it if it worked. Instead, replace it with a legend affix or another mythic.

For ring, you could add effective mythic if head mythic becomes Energy.

Push the Limit to increase the horns 150% MH as well as sprint 20 hero points.

Even if you remove rage set affix, you can add crit damage on your pet and 60% crit damage through the nature by beryl crystal (of strength). That set affix can be replaced by either pathfinder or adventurer.

Another idea is to add 90%+ weaken since that can heavily increase damage. There is hardly room for it in this build for an old one but you can still add 1× 90% weaken by removing block since sometimes, you only need dodge to survive .

Push the limit? Which item is that? Headgear? Sorry im very new i only farm hard. Hahaha

Which set affix is good for my axe and ill remove the ignore resist legend afffix?

Suitable set affix for axe? Could be anything . You can use Hunger set on axe which can be from Hunger how Jasper to axe but that’s also from floor 800+. That goes extremely well with Energy Mythic and it gives extra attack speed and cooldown.

The cerebral vortex chest is called Clairvoyance , the ring is called cognition ring which I mentioned earlier and the amulet is called Divination. They all can contain push the limit but the ring has 100% ED.

Okaay. Im re reading all and trying to figure it out.

If i put bloodmagic on my ring and add energy on my head thats works too? Or ill just farm the push the limit affix? Since in the floor 400+ atm