Debating giving Draught a try, because I tried to make a Nova ring before I realized it only works on OH. Looking at the available mythic for rings, Effective seems pointless if you have prismatic, Hunter can be gained through Ascension so it’s redundant… seems the only other decent choice to be Draught. If I understand the description correctly, 50% bonus to attack and move speed, but then what exactly is attack? Is it just your power stat? If I have 100 power it becomes 150 for 3 secs? Or is it a multiplicative/adds to weapon damage affix?
Tried to find “Attack” in the codex but found nothing.

Rant finished:
It is (attack and move)x(speed).

Ok so you recommend Effective, but your reply about Draught confuses me. What exactly is “attack”? And what do you mean by (attack and move) × (speed)?
Is attack “power”, as in the stat (power, health and mana)? Or is attack some derivative damage?

Edit:
I don’t like Effective because 25% boost is low outside of PvP.

I don’t like draught because duration is too low and requires constant spam.

They are both really good affixes, I just personally prefer not to use them.

Thing is, I tried to make a Nova ring, realized after that it’s not for ring. Problem I’m left with is I sacked a nadroji set affix and now want to still do something with my 4 socket, +sets affixed ring.
Effective giving 25% bonus elemental dmg constantly isn’t bad, I just recall reading some negative post about it. The 3 second timer on Draught does seem low, but if it’s affecting attack speed, won’t help me much as I spam reactor ice orbs with aoe dmg, and I believe attack speed only helps primary skills on weapons, right? The movement speed would be handy, even in 3 sec bursts, but Adventurer covers it fine. So I think I’ll make the Effective. Thanks again!

That’s because if an enemy is immune to its usual weakness, effective makes you unable to damage that enemy. Throw on an Ignore Resists affix and that goes away (you should have that anyway).

Ignore resist is a better idea since you have no restrictions like enemy immune at all. All attacks will become full potential attacks at this point. Effective is a meh but ignore resist is generally better. Sorcery on wizard is like the effective mythic as well. The enemies have high resists or immune so elementals deal less damage than they would if they had no resists. Once that resist barrier is ignored, they are vulnerable. They (probably) still have AR but it isn’t much to affect us.

Resist can reduce elemental attacks and any attack really I believe which is why it is so good. Ignoring that resist is a huge advantage.
Ar reduces weapon damage attacks from enemy swords but less resistant and powerful than resist.

No, it is not. Sorcery boosts things like Fire and Poison DoT. Effectiveness is unique in its effect. Also not every map has immune enemies and you can always choose not to face them.

Fair enough. Thanks for the answer @Clogon

Rubik never used ingnore resist and only used effective. He just skipped every map that was immune to get to M3 floor 1200+.

Another option is to just remove the sockets again. Sunk costs and all. 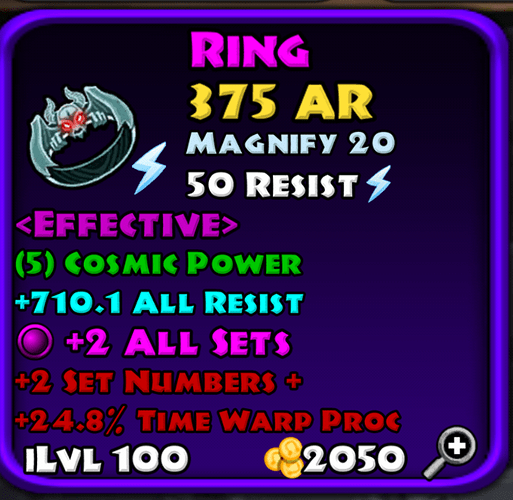 Finished product.
I’ve had some lousy luck with obsidian.

. I tend to use ring for resource mythics like energy whilst having hat using a mythic such as harmony or serenity or whatever for some damage buff. Energy bar being filled easily by mythic such as harmony is awesome to me anf I prefer that instead of using mp on hit mythstone, especially in pvp. Just my opinion though and it doesn’t apply to every build I could design. Ignore resist for PVE if I wanted ring to have resource mythic, otherwise effective ftw. Both are pretty good for sure and compensate for certain situations

Why are you using Magnify… Astral is SO much better.

Because lately I’m farming a lot more than advancing, and I like magnify for aoe. Opens all containers and hits all enemies.