I believe this legend affix is bugged as it reads increases toxic, torrent, freezing, immolate and orbit.

Instead of paralyze/or stun it has torrent which I understand is a skill that people often proc with. Is this a bug? Or is LIGHTNING left out because STUN has its own affix in epic.

Edit- So ppl dont think I am crazy 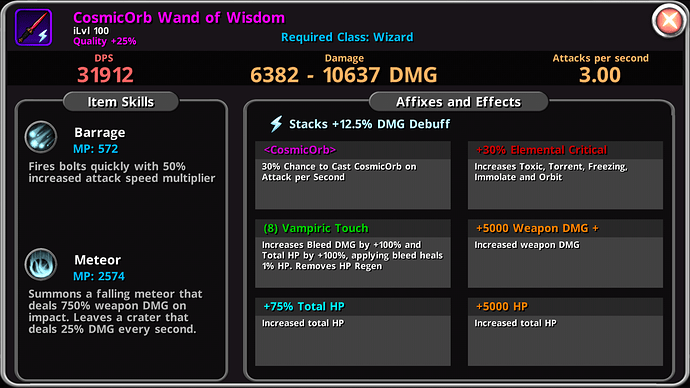 Elemental Critical gives you chance to cast Toxic, Freeze, Immolate, Paralyze or Orbit depending on the element of the weapon you use to cast spell (or skill).
The torrents you’re seeing might comes from Torrent Proc or something else. It has nothing to do with Elemental Critical.

No what I am saying is TORRENT is LISTED on the legend epic affix of ELM CRIT as the description along with immolate, freeze, toxic and orb. It doesn’t have shock / high volate or anything for lightning at all…

Oh you were talking about affix description. I thought you misunderstood the way it works.
Noted, thank you

So do you think its only a description glitch or an actual glitch?

It’s evident that you can’t actually cast Torrent with red EleCrit. It’s just a typo which will probably get fixed on the next minor updates

PS As mediocre as Paralyze is, it’s working with red EleCrit. You may even check the stat page.