It won’t be too long till most of the eternal league players become immortal. Faced another 2 immortal descendants today and yeah it’s challenging because it pushes you to learn how to counter those types of build and learn more of the pvp mechanisms and stuff. Most of them said you need High hit frequency, Multiple damage source and Decent spike damage to rip those lads arses but as a 2 months old DQ player, unfortunately I haven’t found a way to make a build to counter them. So out of fun, I just made one immortal descendant until I build the right build to counter them

. Btw im just 2weeks in pvp so I know my characters suck. 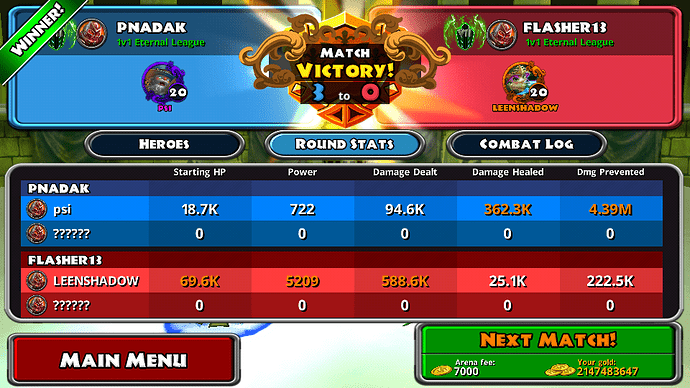 Killed @Mandelbrot build with 8 draws but yours and JWS build are tougher I would say haha. Well luckily in the future I can build something that’ll whoop ye arse lel

it takes 4 prototype build but the best so far is that build. I guess it need a lot of experiment and testing again

I’ve noticed your immortal is REALLY far weak in DMG than original ones (JWD, Mr. Scooty and Mandel).

Although, it’s pretty decent to make a WALL beetween div 1 and div 2.

Yeah. Well to make a really good immortal takes a lot of time, analysis, maths and knowledge. Something that few can have . It also takes consideration of every possible affix there is and every formula . Every possible damage reducing affix you can think of that makes a huge impact in one slot.

Also the HP/MP ratio, what mythic you need, exactly what sets you need to make the best reduction of damage ,etc.

I did some of these for rogue and conclude it definitely not for rogues (LOL).

I’ve reached 94% DMG reduce plus big healings. Although, my damage was like feathers hitting rocks.

Yeah skullshield for the damage. Warrior and wizard immortals are definitely possible and have been achieved before. Rogue can be achievable in immortal build and it has an advantage up it’s sleeve that wizard and warrior doesn’t have.

It isn’t skullshield but it is so many other things. Think why rogues can be a pain to defeat if they are tanky.

I’ll do some more research about achieving an immortal rogue then.
Although, it isn’t really fun at all playing as an immortal.

Yeah that’s true but it’s more to stay in arena than actually playing as one. Playing as one is not that fun I agree but it’s originally designed to be a challenging A.I that is hard to defeat and not an ideal online build. It does rely on draws for power.

It’s literally designed to troll people into spending more time into defeating them and it was also designed because people said arena was too easy.

That’s my mission as of now, how to be tanky and at the same time how to be a killer after 5 rounds haha.

Exactly, took me one week to discover the concept and finally build one although it’s not a killer yet. I think I am still far yet in achieving an immortal-ish build with a decent damage that can kill avrg builds with just 5 rounds. Have to think what affix I should replace and test it even if I only replace a SINGLE slot lmao.

hahahaha, good luck and let’s see how it will go on.