And following on from my friend @Golem you can do the same floors very easy but keep an eye on luck. Try to get as close as you can to 1012 percentage. But don’t expect miracles. It’s an hard grind but you can improve the odds.

my Luck is +850%, because I feel like I am not ready to Craft a decent +1012% Luck/Gold Find Farm Build with Epiphany. I have come to the conclusion that any Farm build I make with these needs to be both Simple & Fun. I am always trying to make these extravagant Farm Builds. I think I need to save the Extravagance for my Climbing & Arena Builds.

And also remember the enslaver is an epic enemy and so if you reroll your map stats using chrystals to get epic enemies then more enslavers. Legend and eternal maps should never be rushed. You may find one. And potentially a great pet.

I remember a post about getting 2 Enslavers on a Map? but I think it was done using Monster Boosts from the Shop.

Monster boost rocks but guarantees nothing other than completing enslaver quests rapidly and dropping useless pets. I’ve tested it.

Okay it’s guide update time. The game has been changed and so some of this guide no longer applies. Some of the guide still applies. Now this addition is for the newish player who cannot afford monster boosts, ascending, or does not have a perfect magic find build. First the news is good and bad. To guarantee an eternal pet eventually you need to do speed runs at floor 401 at least and you must complete the map. Why 401 ? Just to complete the enslaved tasks which will get you a legend or eternal pet. In that case save any gold you find and ascend at least once and choose the accomplished perk which speeds up the rate for all task completions. The enslaver appears randomly now on any map. But recent testing has revealed lots of enslavers (Only if you complete the map

actually, @Mr_Scooty did an update for Patch 3.0 somewhere in the middle of the Thread (Post 116 in this Thread). the original post was actually asking for help on the subject, then he had a total of 3 posts for Pet Hunting Builds, the second an update on the first, and the third an update for the second, which is the current one for 3.0.

at the moment, I am running a Farm Build without any Nadroji or Nadroji Bonus, and I am definitely seeing fewer Enslavers than I would with a double Nadroji Bonus Farm Build. I do, however, think that one Nadroji Bonus does increase the chances of Enslaves a little bit, but not as much as using two.

I still have double nadroji bonus
and most of the guide still applies. But if you’re a newbie that can farm at floor 401 very easy then you will probably have dropped an nadroji bonus item anyway.

true. first a player needs to farm for the items needed to make an Eternal Pet Hunting Build. my build is geared more towards getting Legend Pets more often. even though I got Merlin Imp with my Floor Climbing Build…

, and it wasn’t even the Legend Pet reward for finishing the Enslaver Feat

What is the max explosion allowed? I have a 520% explosive legend affix on my Melioda’s Hilt, but the stat page says Explosive is 420%. Also, does this work only on the one weapon, or does the one affix on the MH affect the OH as well?

*Sorry, I realize this is off topic.

Melodies hilt is a deadly sins item. It increases all the % on all your items but reduces all your set bonuses to 1 per set. So if you have 4 to all sets on gear then you only get 1. Deadly sins users tend to stick to the entire set for that reason . All affixes are capped but you can raise the cap ( e.g. Using epiphany set bonus.) Deadly sins on its own will not raise the cap but will make it easier to max out your % chances so that you reach the normal cap without constantly repeating affixes on gear ( e.g. You can get away with one deadly strike affix rather than two) 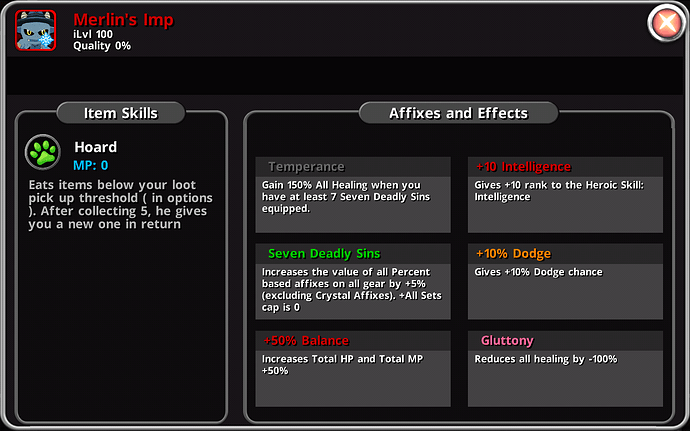 Explosion has a cap of 2000. from what you are seeing on the stat page versus what is on the item, it seems as though SDS can raise an affix over Cap, but the Stat Page only shows what is on the item before it is increased by SDS bonus. so if you have 2000 on the Stat Page with 5 SDS on your gears, I guess you would have Explosion of 2500. if you had a Build with Epiphany (5), your cap for Explosion would be 2500, so you could have 6 Explosion for 2400 instead of 5 for the 2000 cap.

it doesn’t matter which item Explosion is on, or which skill causes the Legend Explosion, DMG from Explosion is +% of MH. each enemy hit has a 5% chance to cause an Explosion each time it is hit. so if you cast Storm and there are 5 enemies in range of the Storm, they each get hit 4 times a second for 5 seconds. on average, each of them would get hit by Explosion at least once during the Storm as long as they’re still alive for the full 5 seconds. Storm 40 is 8 hits a second, so they would each average 2 Explosions possible for the duration of the Storm. any of them close enough to the other would be in the AoE of the Explosion, so would be damaged by more than one Explosion. I have read that the Explosion itself can cause any enemy hit by it to have another 5% chance to cause another Explosion, but I haven’t tested that myself.

I’m using a double Nadroji on my farmer and have sacrificed eternalised because I have the treasured perk. But that’s late game gambling. Without the perk then keep eternalized.

Ha! For the record I have treasured

lol!. well, some of the math is stuff I have learned from doing and seeing, or reading in forums. also, I have had some crazy ideas, and some work out and some don’t.

also, reading some of the latest posts I made on this thread, I am back to using double Nadroji again. just need about 30ish more Enslavers for the next Eternal Pet. hope it is one with a Set affix I like to use with Epic affixes that are usable on certain build I like to make…

i got this but etarnal version …