What do you think a good level is to farm pets. Personally any floor where you can easily kill them.

Also if you want mythic Enslaver feat, do floor 400+ and hunt pets that way to get ever close to mythic Enslaver for eternal pets. Also I wish you luck on getting the very rare seven deadly sins imp or better yet, the eternal version lol.

I wish I could go back to the days when I used to farm and farm 6 hours a day. Now I’m at 1-2 hours a day which isn’t too bad. That was when farming was a lot harder but just as interesting. Although I wish I could farm 6+ hours a day in this patch too but I just don’t always have it in me like I did when I played for the first yeat., When I had hardly any friends and when school was most stressful.

Although I do seem to play again now that I got a nice part time job to save money and spicing my brain with other variety of good games really does help .

Wow nice. Speaking of farm build , I FINALLY edited my farm build after a year or so. Almost 2 years lol!

I mean I did small edits here and there over months but I always put more focus into actual farming and making other builds.

My fortune bringer warrior is now able to deal damage instead of just moving and letting hirling do the work. (Obviously fortune bringer originated from cronos). Although I did graudally edit my hirling farm wizard from lazy to actually competent .

Arcanist helped and then frozen. Then crushing flames. Although before all of that, I used the Plagued Blight combo. I used so many ways of farming tbh.

Also now I can farm much better and easier . Also RNG gave me great luck on re editing my farm warrior.

Still I gotta fill the Eternal codex. Anyway how’s it going Nightblade? I heard it’s been going amazing for you.

I also finally made farming almost lag free. I mean it’s still fast but I despise them zombies and crashes and sometimes lag which shouldn’t happen on a good device.

Farm pets on floors 401 or just in floor 2 same as before.

This is my wiz main gear 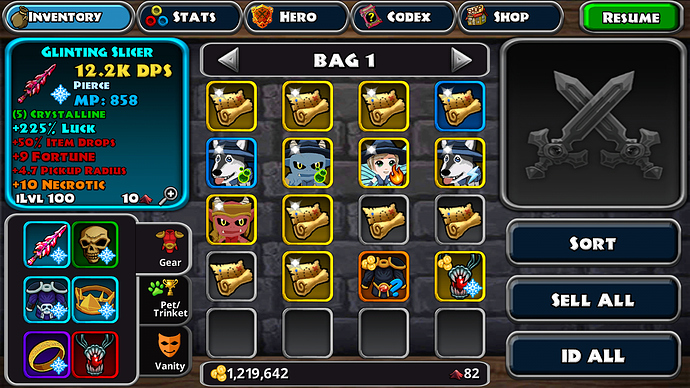 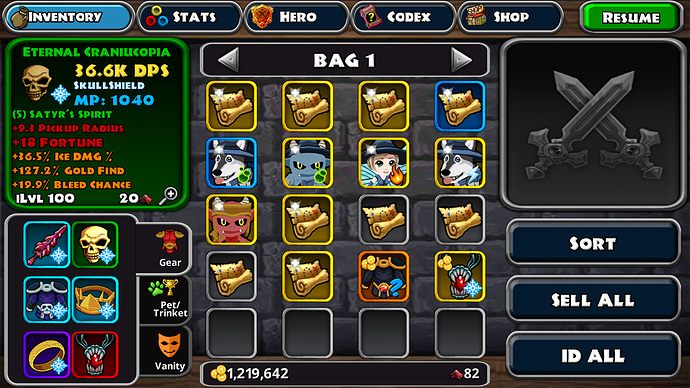 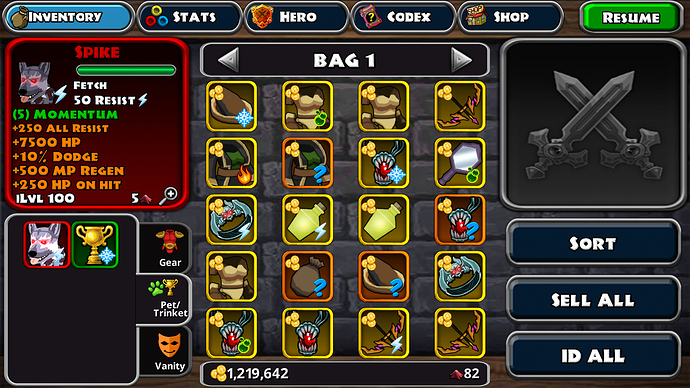 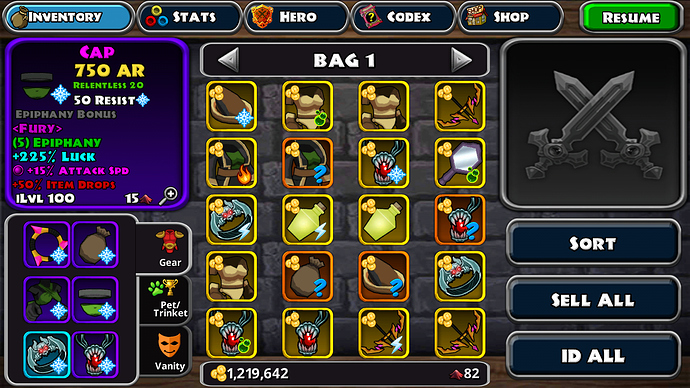 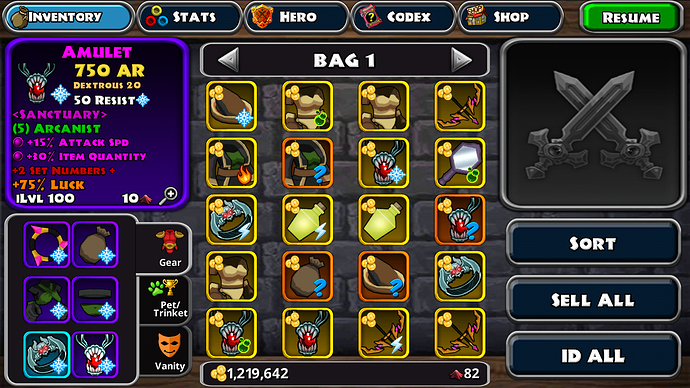 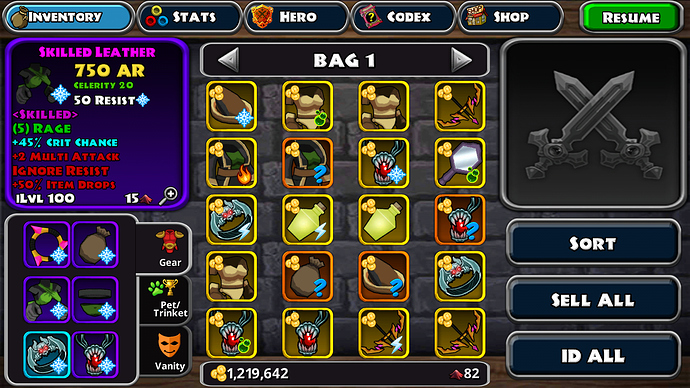 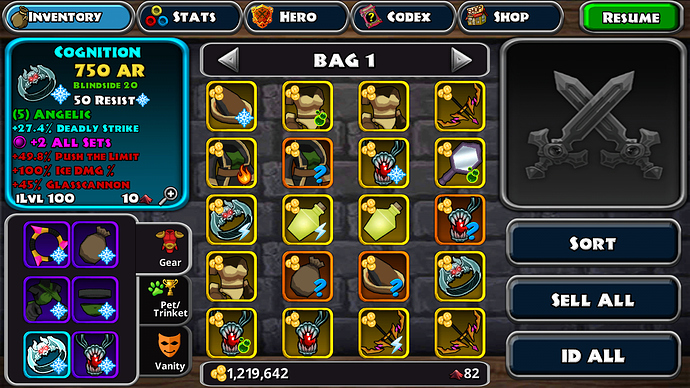 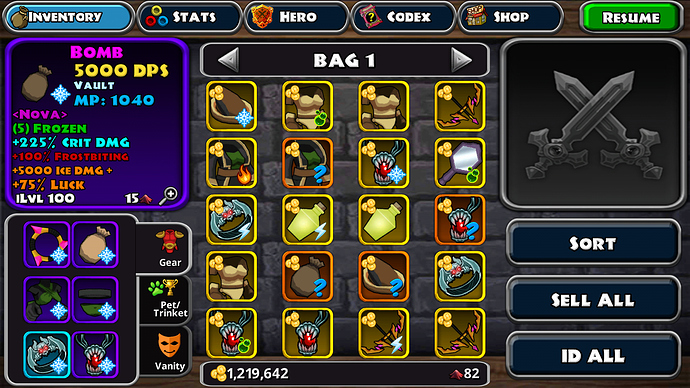 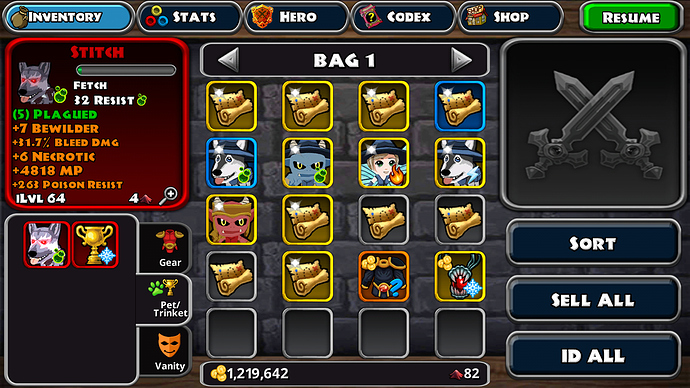 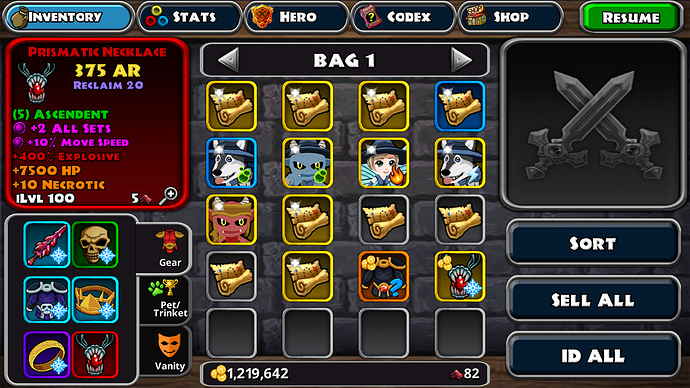 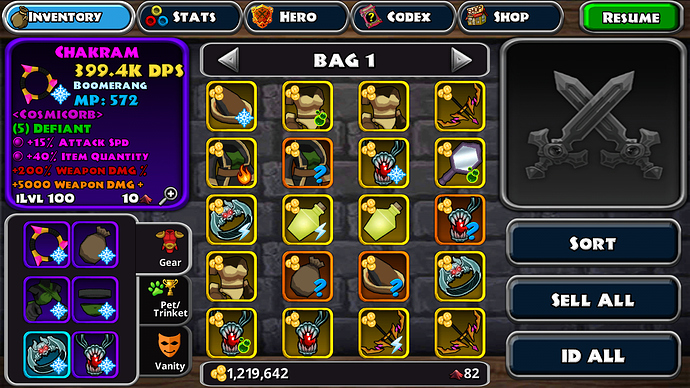 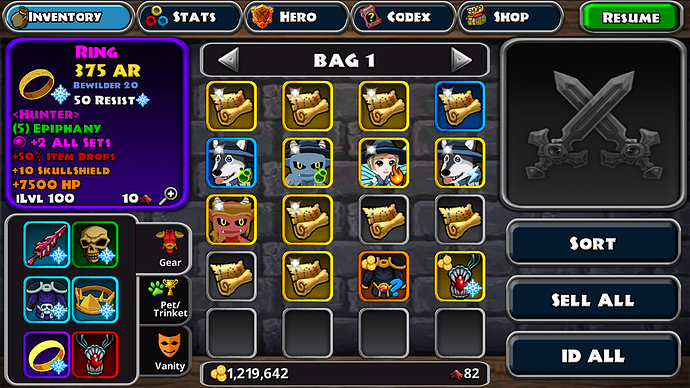 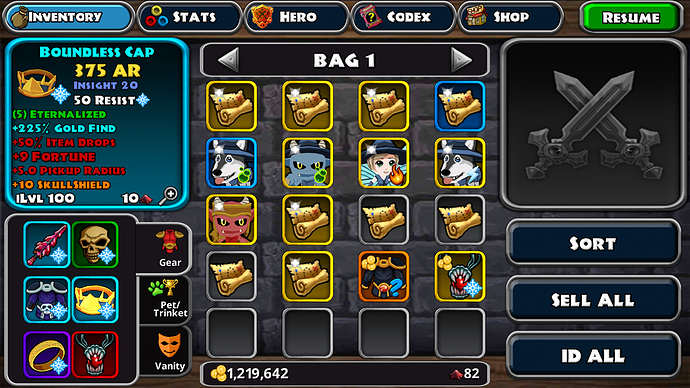 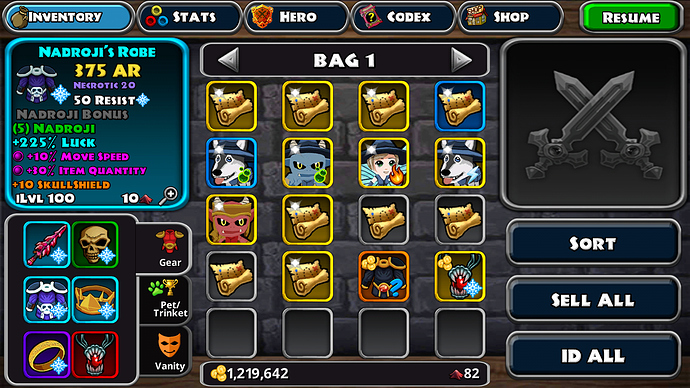 Yep. Im doing part time job in restaurant and earning some good money before I return to college next September to do my IT level 3 course for however long. Hopefully my GCSE English gets a good grade because site the one thing I struggled with (though I think my English teacher was amazing, the curriculum as easier and I used the skills in forums sometimes).

The job is in a restaurant as well for the weekends. I mean at least I do have a job and earning some money. I struggled to find a job at this age of 17 but I found it. More work experience ftw.

Awesome build. I would however suggest crushing flames to make things easier for you and fire elemental crit since those came out and make life radically easier.

Also Arcanist is a bit nerfed from what it used to be so it’s not as OP but it isn’t outright useless. It just is less effective unless you have ascendant arcane debuff and high enough weaken. But ascendant would interfere with Frozen (unless that Ascendant from hirling works very well with it still ,which it probably does providing you have weaken).

Frozen is still useful for the hirling though but nowadays, it’s just much easier to go with crushing flames on each character and call it a day for dancing. Before that, yes your build would have been fine for 1000 floors.

For Nadroji bonus, you would need 2 set slots dedicated to Nadroji otherwise it wouldn’t activate. It’s good but imo, not worth it if you want more DMG in farm build. Although if you equip crushing flames, DMG isn’t a concern even at floor 100 because of the insane crushing blow with Immolate killing them super fast and instant. Hirling will still have to deal lots of damage .

A good farm build though. but has a way to improve . Epiphany bonus needs 70% attack speed on gear (it can even be done without the epiphany set).

My improved fortune bringer 3.0 farm build. My 2.3+ fortune bringer lasted me throughout but I did experiment with few things since HP wasn’t as good and prayer was heavily nerfed. Then I just focused on making it speedy and relying on wizard.

Now that crushing flames was around , I made it so that it can destroy many enemies in packsize and causing less lag and wizard still helps . 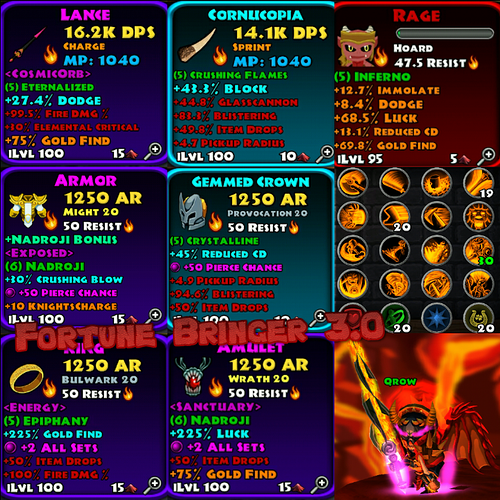 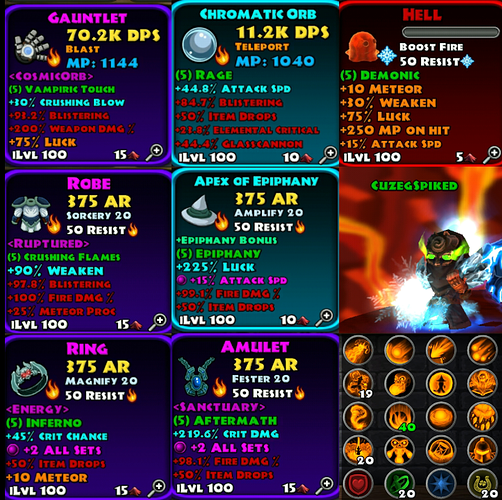 My wizard used to be Frozen + Arcanist but still use demonic pet. Before demonic, some other pet I can’t remember but something that was useful such as pathfinder or momentum or so. That demonic pet is edited since you can now edit pets with crystals these days (very very expensive though). Also be used to not have the but have 225% crit and 2× epic 75% crit.

This was my old warrior before I edited and I had him like that for ages. Also had crushing flames not come out or Arcanist wasn’t nerfed , I would have added Arcanist + ascendant to my warrior to help and some potent element such as ice or poison . That old warrior I also used as a debuffer warrior for my floor climber. 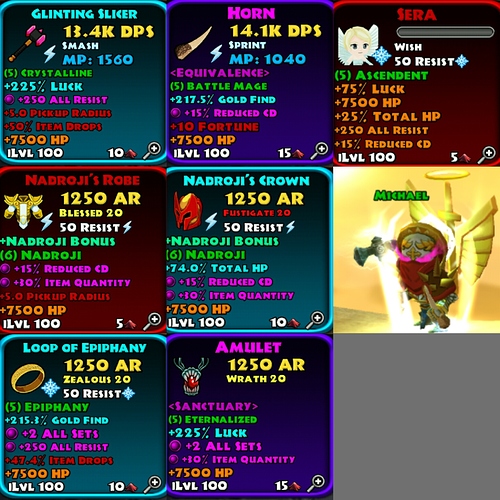 When equivalence was changed a little bit, Regen was changed, prayer was nerfed and I add epiphany, this is what my old warrior would have looked like. I used elements slime at one point to speed up movement with shatter + charge . I also used resist to exploit the glitch/but when shrines have you 100k resist with 10k resist but also as survival since the build don’t do DPS and I was lazy.

If Arcanist wasn’t changed/nerfed or however you put it, I would have used Arcanist+ Ascendant warrior and that alone was too good.

As far as reduced CD, I tried it and it rapidly improved my farm rates since I could move around quicker with Charge and shatter.

Well now that I edited, I’m a bit proud. Albeit I lost many crystals but it’s starting to pay off because I can farm quicker and less lag, even at floor 1000 no sweat. My warrior here does little DMG but that crushing flames is OP enough to help out and wizard only has a mediocre amount of DMG but still helps. I do remember experimenting with Haunting + aftermath + Frozen and Arcanist as well and it theoretically worked and actually worked, though not often so I changed my mind . That Arcanist did help me get to floor 1k farming easy but then crushing flames is where it’s at.

Before even that, I used poison over Frozen when poison clouds used to be much more powerful by constantly ticking instead of only once. Floor 500+ farming was fairly easy though. Although I most of the time farmed at floor 200 but even more so due to dust crafting. Floor 400+ when it comes to pet feats.

Here’s my very successful floor climber and PvP build. I did update it a bit though but they are still powerful even today. I can do floor 1600 without crushing blow with ease as well. Even more so due to double strike and other possible things.

These builds shown my dream come true of trying to build my build idea of rogue discordance orb which hasn’t been seen before even though probably done before and also due to chakram cooldown affecting orb. I thought reply deeply though. I thought about permanent stealth and even with the nerf of stealth , I was able to get semi permanent stealth with 50% dodge to able to 100% dodge and lasting a fair amount of seconds.

My floor climber build was also so damaging that it helped me get to eternal league Division 2 alone without any modifications or barely any just to PvP well but then I learnt to modify it so it can do very well in eternal league division 1 . Today it still does very well. I never expected the success but I did have an idea that it could mail in PvP and right I was. Originally my intent was to use fire + shock with that discordance orb rogue but I realised that arena was better with shock/ice and in PvE, ice was better with Frozen and to better showcase the insane power.

Wow man you have been busy

Yep I was. Well actually I was lazy for 3+ months but sometimes busy on the odd day. My crystal supply with thousands of crystals gave me huge amounts . 70+ ruby, 50+ amethyst, 25 obsidian , 70 garnet, 99+ of everything else. Although now I have only 28 ruby, 40 amethsyt and 10 obsidian and 40 garnet and that’s it. 99+ of everything else but I had to convert lots of crystals. Tons of gold tone but it worked.

Even when I was lazy, I did really well in farming as you can see with my builds posted in forums.

Before I spent on the farm build ( I also saved up to 400M gold and spent a lot just to convert). 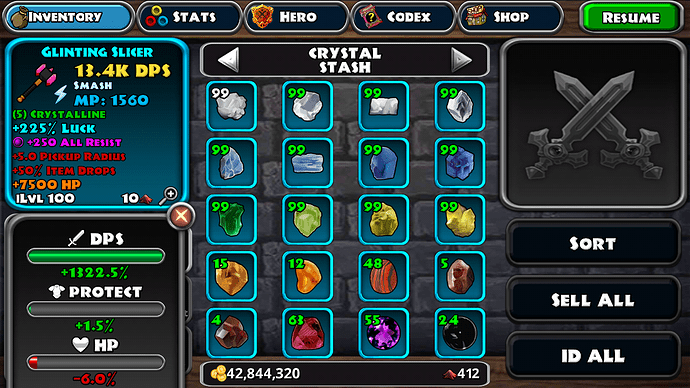 After spending on farm build: 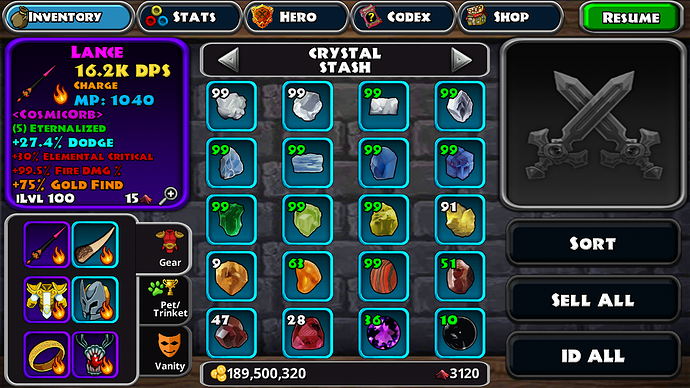 Yep. All those crystals were just hidden between the 9000+ common crystals that I never converted for months on end until now. I always played the bankrupt man to be wiser with crystals.