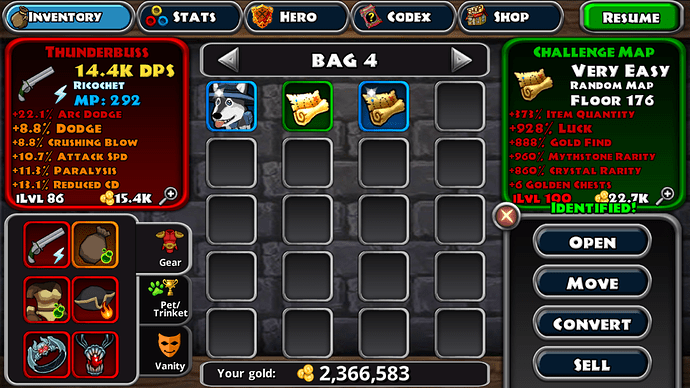 Nice! I got my first and only not so long ago. But before i got the drop i fully equiped (crystal/mythic items) my rouge and warrior and got to both eternal leagues before the green map drop

Next will be eternal pet (do they even exist?

Look at the price, it’s so high!

It didn’t drop squat. I think I got a level on that map, lol. Legend maps give me more for some reason, with less % … must be RNG at play.

Floor could be higher as well. Play some regular (non green) challenge maps to get your floor number up then “Convert” that green map up to that floor number. Higher floor number better the goods (generally speaking)

I’ve made it as high as 438 so far on that character (I just ascended not to long ago in that pic). I keep forgetting we can convert! ack!

Congratulations! You found your first ever eternal map

but So far after a month or maybe few weeks if (the big if and RNG luck) I’m active , I collect maybe 1-5 eternal maps. Before 2.1 update , probably a lot less and I never got eternal maps until 2.1 patch. I tried the eternal maps but it’s usually better to use pack size maps.

Long story short, save your eternal maps until the best time you want to use so you make the most out of them

Unfortunately, free boosts have been removed from the Fire TV version

Oh god! How annoying! Oh well, it isn’t the end of the world because you can adapt. Eternal map is good even without boosts but it is best saved til the right moment when you feel like you could use them because of their rarity really.

what do you mean the “boost have been removed from the Fire TV version”?

Ah, perhaps I should have clarified. On the phones/tablets, you get an offer of a free boost by watching the advert video. You also get a random free boost, for completing certain achievements.

The video watching is not available on the fire tv. Only the random free boosts… which doesn’t help in the situation @CuzegSpiked mentioned above.

Now I know why and it all makes sense

. Thanks for clarifying. I didn’t know the ad boost only works for phones and tablets, until now.

I found my first eternal pet 2 days ago, it’s pretty crappy though hahaha

How do you convert a map to higher floor? Using which crystal??
Also Should I be doing maps on very easy to start with? Atm I’ve been doing mythic 1, is there a big change in the item drops??
Let’s say I am on floor 400 very easy, how could I make this map into mythic 1 or 2 if I wanted too?

Also, any time you play on a “set top box” (google TV, fire tv, etc) there are no ads as well. Just an fyi.

There is a button that appears in the bottom left corner of the screen when you choose the map. Pic attached 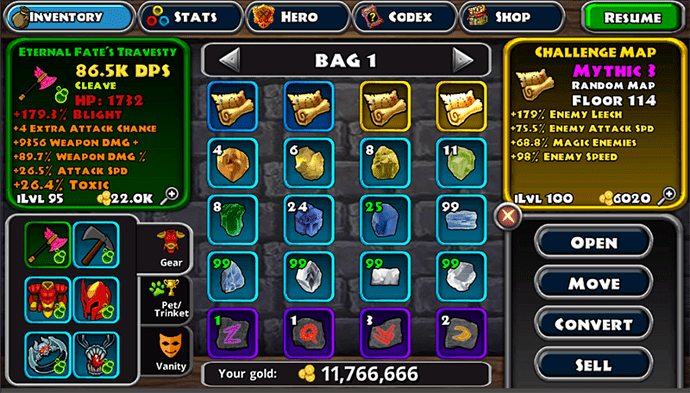 Okay thanks, also is there a way I can change the difficulty of the map??