Getting over +1B damage /w survivability?[SOLVED]

I tried everything I could but I cannot get the damage output I wanted, if anyone can guide me into the right direction it would be most appreciated.

I want survivability because… 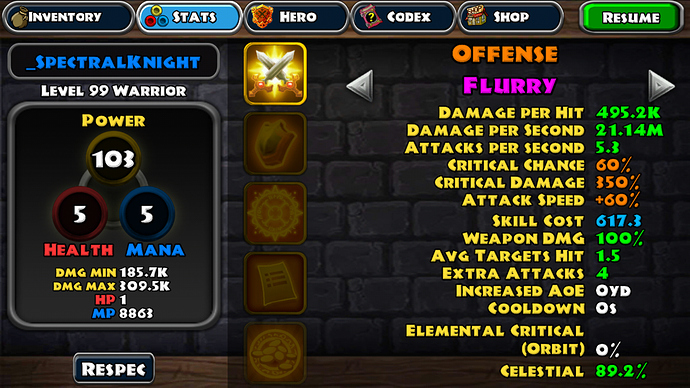 dodge and / or block. always works.

I eventually do get hit and die (one shotted) by mobs. And still the damage is no where near 1 billion.

My farming wizard has 40 skullshield ( using epic affixes ) with explosive affixes and critical strike etc… all hero points in intelligence , strength , dexterity and fortune. He randomly does billions or hundreds of thousands damage. All stat points into power

I wouldn’t mind a clearer picture of your build as you missed out the affixes on ring and other things.

Whats your main attack and how does this build function are your main questions? Also this build is lacking in many set affixes and why harmony in PvE? You also need a resource mythic. Maybe Energy/Fury could be suited for your build but bloodmagic has a nice way of increasing dmg if your HP is always low (at least 10 HP but thorns activates or sanctuary). Barbarian, push the limit and glasscannon are good calls though if you want increased dmg.

The main attack is the heart of what you can do in the build and improve effectively. If you are using flurry , then it will be difficult since you have to be very close range and the sword is one of the weakest weapons in terms of MH base dmg. 100% block could be your aim if you wanted but you have to use Epiphany and multiple crystal blocks as well as bulwark talent.

Crit dmg and crit chance is fine. But you are missing a couple of crystal affixes it seems. I think 90% weaken can go nicely with the build, dodge, possibly crushing blow if you attack quick enough. Deadly Strike can help a lot with high crit dmg too.

Adventurer, Masochism, Momentum with some move speed skills and affixes, Pathfinder can go nicely with dodge, over 100% weaken to increase more dmg by over double, Arcanist with arcane and ascendant if you want a nice combo and increase lots of damage by debuffing many enemies and killing them. If using poison, Plagued can be a good choice.

For ice, Frozen and potentially permafrost. Fire, crushing flames + inferno and immolate as well as obviously using crushing blow. Demonic is a nice way to increase dmg by 100% if enemies below 25% HP and that can be used to hugely increase spike dmg with frostbiting + Frozen or paired well with Plagued or Crushing flames.

For shock, I would use Electrocution to increase dmg by 50% per stack debuff and a +1 stack debuff to increase a lot of dmg and combined with high voltage. Demonic pairs greatly with this too.

EAC, Skilled and MA are good for primary skills such as flurry but if you not using flurry often, I wouldn’t use unless using discordance. Also if not using flurry anymore, switching weapon to lance/hammer is one of the easiest ways to increase dmg as special skills can be switched using amber crystal on any weapon. Also Extra attack and Multi attack dont affect offhands like hatchet.

Double strike is a great way to increase dmg by sometimes doubling hit frequency by 25% if you can jasper that legend to warrior.

I would also recommend 200% WD rather than 100% WD and at least 300% ED for optimal increased dmg. Also depending on the elemental crit, 300% of the Elemncrit such as Celestial and 30% elemental crit legend affix.

Theres quite a bit of way I could improve it but a clearer way to show all affixes and pets may help too in screenshots or something.

, maybe I haven’t played the game enough (<24 hrs played, I’m on floor 200).
I will tweak my build more and share the results with you (via pm if that’s fine with you?).
And Happy New Year!

lol… you’ve been introduced to Cuzeg"theCalculator"Spiked, i see…

My head it hurts… the bells are making me mad… lol

I did what you said in the last paragraph and by adding 200 ED% and 200% elem crit damage I can now get over 4 billion damage effectively and around 6-7 billion for deadly strike…still need to understand the set affixes and damage output calculation to futher enhance my build, until then I’ll have to grind (used over 23 obsidians 47 rubies and 16 amethyst lol xD).

Find an eternal fabled staff and craft it to your class. You gets loads of damage 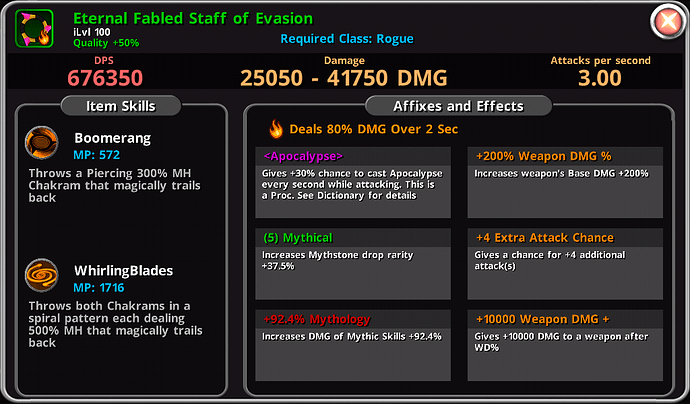 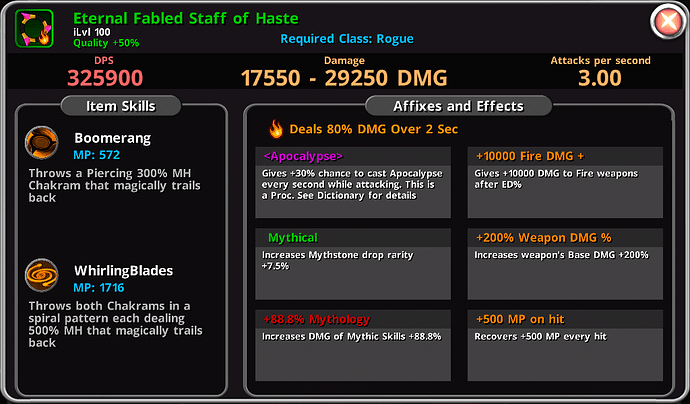 I did actually unlocked that with dust but as I cannot change the set affix I’m looking for alternatives.

Those epic affixes are on point!!!. WD+, WD% and 4 extra attack chance.

It sure is a pretty thing and my rouge loves her collection. She will be my second farmer when I jasper some farming equipment over from wizard