Is it just me or are these 2 newer sets completely useless. I am dieing to get fear on my characters but I cant even hardly find a skill that has long ebiugn cool down so at that you have like 2 skills that with even attempt to proc. The haunting bonus seems viable but in PvP because mythstones are reduced more then everyhtint else to activate it in PvP you need 2 extra clear cast affix witch puts you at 5 affixes. You can make up that dmg in about 2leg affixes no prrob. Angelica is a joke no way around it. I’ve yet to see someone using it and dislike it antheres what maybe 3 builds that.

Why does scoundrel seem like it got the super shaft compared to spell sword and battle mage I mean come on 5% sentry proc 2% stealth proc vs 20% HP/ar or mp/resist… Why not something at least semi decent ffs Dodge/speed/cool down reduction. Not the most unused skills in the game…

hhmm i love dagger/blinking rogue. i already tested haunting gear build since i got the eternal dagger and ring of haunting gear ,the 100% damage boost is huge + epiphany bonus and push limit/glass. but the fear effect is very rare to see or activate even my cooldown is 0.2 - 4.0.

In pvp haunting bonus is nah.for me;)

Scoundrel is also good for me for putting traps.i tested it scoundrel blinking plus enigma and discordance.unlimited blink traps is everywhere in maps then explode with frozen in billionesss hope to see more update on dagger weapon.

I think maybe there is a typo on Angelic. I think for (5) Angelic it is meant to increase 25% not 1.2%. Can a dev or mod or someone who knows abt the game please confirm? @Griffin012 @SteigerBox

I’d like to see Angelic get fixed bc it’d help Ricochet Flintlock rogue, which imo needs some balancing bc it’s weak against single target. So I’d like to know if it is just a text error and Angelic is actually increasing Ricochet dmg & aps 25% not 1.2%? If so, please fix it to show up on DPS window or at least on Ricochet page in All Stats

Yes there is a typo. It gives 5% per rank as stated in the Patch notes. Will be fixed this upcoming patch.

I can see scoundrel actually working well with hunger. I forget which set has the kill switch legend affixes. Seems like you gotta make things walk through it though really be a kiting build.
I actually got eternal crystal haunting dagger and just confound ascendant amulet that has 23is clear cast but you can’t use the ring for the bonus and get your Max set bonus. I was so excited then so upset. You need narodji + socket or a socket slot in the amulet.
I recently hot 65k HP and 1k power in pop and trying to add clear cast devastates my stats or procs. In pve I just use against/frozen/reduced CD for stealth it’s pretty much face roll ez mode and fast besides the last 1 % of some bosses will literally 4 to 5 min when the run alone can be under 2 min lol ( that’s around map lvl 1200is) with I guess also that much clear cast did prof alot in pve but pvp it’s almost non existent still. Also my main pvp is flintlock ricochet so don’t really benefit from it lol

@gummy .uhm i switched my eternal haunting ring to the legend one…i removed the haunting set affix and made a discordance…and the eternal dagger remain so i only added two clearcast myth stone to activate 100%bonus damage plus 100pl,50gc,and 48 barb. i just made this build kinda exited about the fear proc that i rarely even see lol. in damage my scoundrel build is far better than this. in pvp i use mage currently div5 - div3 im trying to improve though.lol 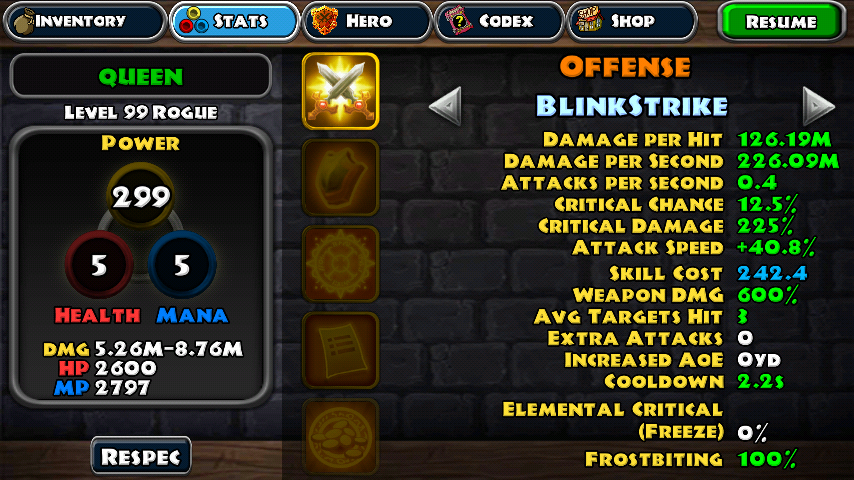 Hmm not bad. The mythstojes don’t trnafer topvpthe same but we both said we don’t really care for it for pvp. But the actual haunting set I have troubles finding a long enough cool down lol

Is that dmg with some arcanist applied?

Hard to tell if arcanist is active lol

@Gummy yeah with some arcanist buff iit can go farther 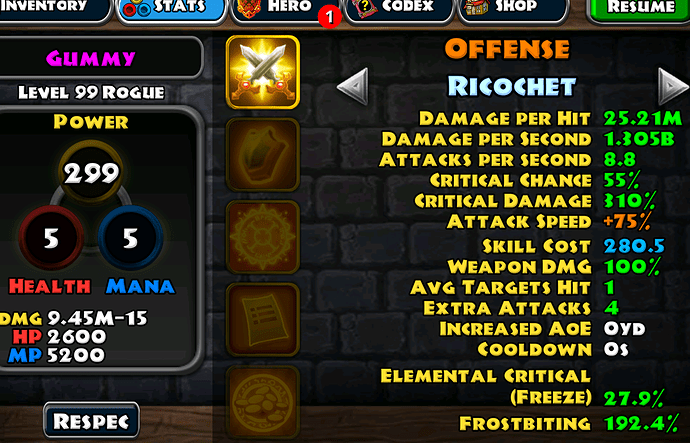 Oh you can’t go wrong I even have perm. Stealth so as long as you don’t forget to click that about every 4 set your good to go lol. I started with bow guided arrow I think I want to switchc back but I got 2 builds to finish cause its just working great and I don’t have the crystals to throw away… Not sure I’ll ever have some of the last few to throw away lol 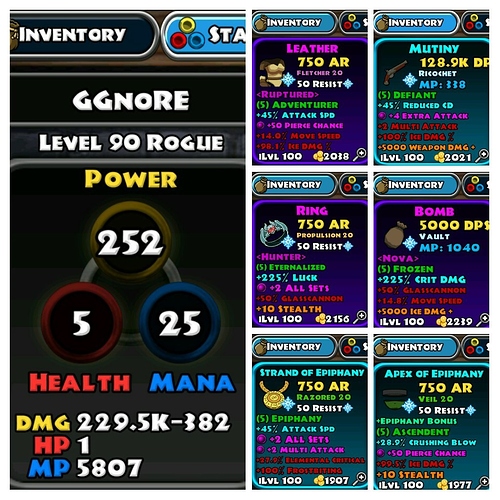 my rogue 1st build is richochet,2nd bow with mayhem eternal ring and now a blinking with dagger i looted lots of dagger thats why i switched and the combat style is not boring.
my main fortune bringer is my mage.
in your main theres a lot for improvement… goodluck in crafting hope you get right crystal affix xd

Lol ya now. That I’m looking at it there’s a lot of things just stuck in there and never wanted to re work. Just added glass cannon duno why that took so long and about to be adding some barbarian an such