guys i’m now running into a lot of players that just walk thru my attacks and procs without a hint of a decrease in hp and then just 1-hit me!? how is this possible?

Yah I encountered them sometimes too, but now I have another problem, I just won a 1v1 Pvp and there’s no points added to me @tdaniel do you have records of combat log of every players, if so can I ask you pls to check mine cause I don’t want it to be repeated huhuhu, thanks in advance. My arena username is Chany tnks

other than that, you would have to look at their Equipment and see what they have. if you are in Eternal League and think that they are cheating, then post a screen shot of their equipment in the Cheater & Hacker Thread for the Dev’s to look at to see if they are in fact cheating or not.

Ah sir @Golem is it possible to be immune in bleed dot? 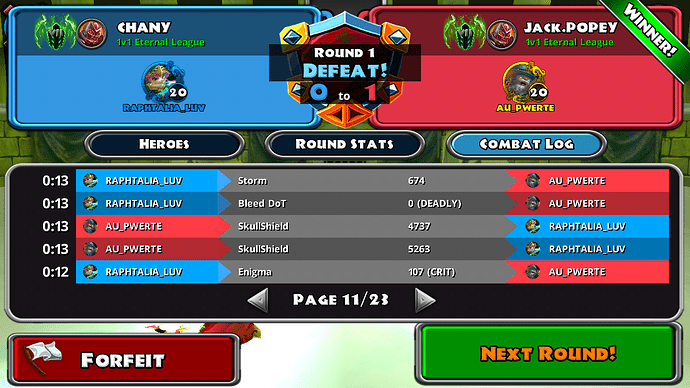 basically, if you use 3 spaces for Perseverance, you can be immune to Fire, Poison, & Bleed DoT’s. even using only 1 or 2 Perseverance, you lower DMG of DoT’s by 40% or 80%. so it isn’t a Bug unless they don’t have Perseverance or a really good DMG Reduction/Resistance Build, like @Mr_Scooty showed us in a post.

aaaand here is the post. starting here, if you follow the thread for the next few posts, you will see the tests Mr_Scooty@ shared with us showing Infinite Reduced Damage. at the moment, I think he is the only one who knows how to make this Build.

@kiane_zaine I signed in the other day to do some tests. Good eye on detail. I will give a peek of the test results below.

That was Insanely awesome. Wow