How should I go about crafting this Chakram? 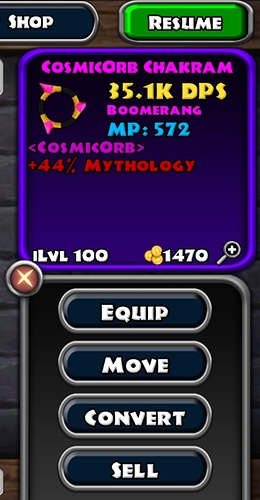 Optional: use a Kyanite crystal to remove the Mythical set affix (green text) that comes on Fabled Blade by default.

The picture is the one I have in my stash. I mean what affixes should I put on it.

Thats up to you. It depends what you want to do with the build.

I know you’ve been linked to various rogue builds in your previous threads, but if you don’t want to copy one of those you’ll need to plan out your build. We can give you tips (like epic weapon damage is usually good to have) but beyond that it’s up to you.

Well if you look in the assassin tree it gives boosts to chakram and for amulet talent it can increase bleed chance or deadly chamce so you could make an initial damage build or a tick build, or if you have any crazy ideas then definitly use them

Otherwise its all up to you

I mainly want initial damage. Quick and to the point. But, since I’m rather new, I don’t know much about what affixes do / what is good for what thing.

Well initial damage is good for farming. but for higher floors tick damage is much better so you could have both but tick is reliant on the weapon to cast it (unless affix says otherwise) so id say weapon damage is a must for the weapons so personally id say mythsone for +50% WD, +50% from epic and +5000 from epic too but like i said if you have any great ideas use them even if your told otherwise

otherwise people wouldnt have discovered OP builds that they have

Combo it. WD with Ragnarok and ED on chest and OH. I personally like fire since it’s pretty underappreciated. I’m hoping so badly for huge build-altering affixes in 2.1.