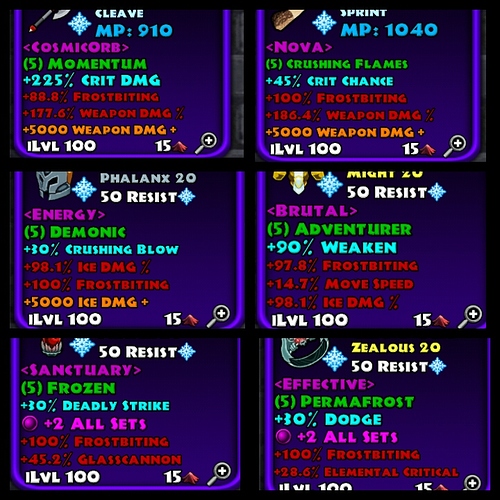 Remove 5000 ice damage for 50% Barbarian Affix which is also good with the energy mythic. This is found from the Masochism items such as the helmet. It’s also found on the berserkers chopper hatchet but that won’t apply to a sprint build.

Push the limit somewhere if you can find space but if not, ok.

Btw you probably won’t need that 200% WD on mainland since main attack is offhand sprint but if it’s for throwsword, it’s understandable. You could replace with an extra 100% ED.or if you were to go with lush the limit with barbarian combined , you can have it on the ring or amulet.

However, I think barbarian will probably be enough for this build given the space. Although sacrificing just 1 100% frostbiting doesn’t hurt as 500% is still powerful for the push the limit and this would increase your sprint OH% by 50%, along with the hero points . That means 450% OH for sprint .

Use hammer instead of axe for base damage. I saw that it has crushing flames though and the option is there to have fire but if not , pure ice is fine too.

For nature’s, add 6× of Strength for an extra 60% crit damage and 75% on pet to max out your crit damage as deadly strikes are potent for your build.

The amulet with Push the Limit is the Divination Amulet and the masochists fetish. Even though you lose 100% frostbiting, everything else is there and that huge increase in OH% is more powerful than 600% frostbiting . 500% frostbiting still OP.

Hero points: 20 sprint , 20 dexterity for move speed and dodge , 20 throwsword or whatever your special skill , and the last 20 on something like Intelligence or Fortune or some other skill.

If you have pet and some extra slot, add 10 sprint on it for 30 sprint for more move speed and more OH% damage. This can save an affix slot so you wouldn’t need legend move speed for example. Your OH% will become 562.5% damage which is still massive compared to 450% in a frozen build like this and compared to 300% or 150%.

Remove that crushing flames for something like Hunger set affix if you want to make use of the energy mythic (optional) or pathfinder and another set affix that you can think of. Terrashaper could be an idea for the build and that can sometimes justify the 200% WD on axe/hammer as well as throwsword special skill.

Change your crushing flames with Rage set affix for maximum crit chance.
I prefer dont use sanctuary in campaign build. Change your sanctuary with push the limit for more damage.

If ill get barbarian on my headgear i cant have that ED% ayt? Wat shud i mix with barbarian? Frostbiting?

You don’t need ED% on that head since you can have hammer with ED% instead (think crystalline hammer aka glistening hammer).

That ED% is to be replaced by Barbarian and the extra slot can be whatever. Could be extra 10 sprint hero point, move speed, etc.

Amber the special skill to throwsword using the orange amber crystal. Also the Frozen set affix can be rolled but you need to switch class of the item to rogue with the Jasper Crystal and once you succeed, then Jasper back to your class; in this case, warrior.

I got the push thr limit in my amulet. But im having prob on my mana pool atm. Cant spam skills

How to solve the mana pool problem on having push the limit?

I have energy and effectve atm still lol

What is energy btw? 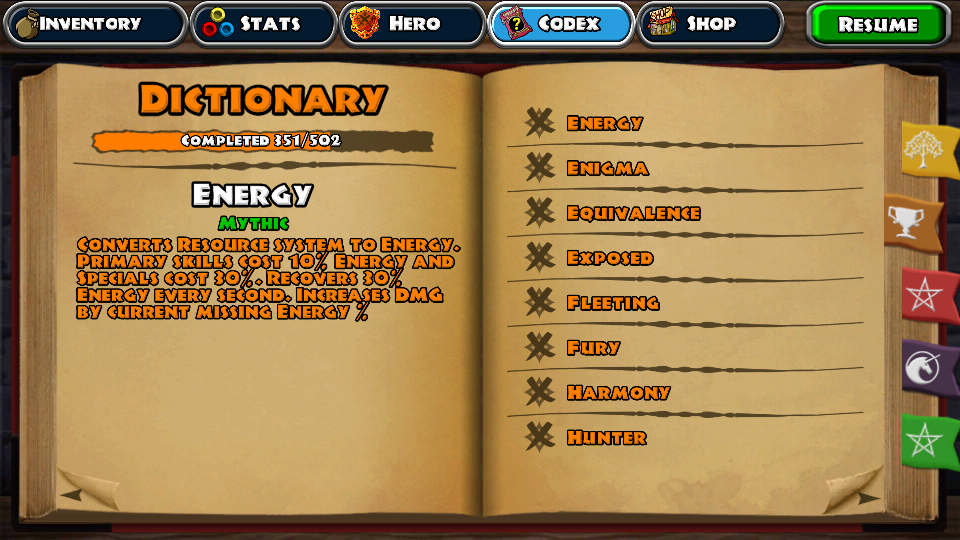 If you have 100%PTL, 50% barbarian, and energy mythics. Atleast you need 40% resource cost for use your special skill. You can change all of your natures equipment to wisdom and + 25.resource cost.
Or +50 resource cost legend affix

Is it not bad to put MP affixes on my pet? I tried and im kinda good spamming now coz of 4 MP affix on my pet and +25% resource cost. And btw what is the cap for luck

What is mp affixes? If you using energy mythics. Doesnt matter how much your mp. Your skill cost using 10%mp primary skill, and 30%mp for special skill. If you use energy. Just dont put MP