I have what looks like a hacked item, but I never used any hacks?

I have a level 94 eternal staff, with the following affixes: mythic set affix, mythical legend affix, rockblack mythic, and then 3 epic affixes. This all looks perfectly legit, as you could make one of these items from an eternal fabled staff. The thing that makes the item look hacked is the name: Its called Eternal livid wicked wand. I have no idea how this item got this name. When I looked through my legendex, It shows that I have never gotten a fabled staff (though ive seen plenty of non-eternal ones). So I am kinda under the impression that when this thing dropped, it already had the messed up name. Anyone else seen something like this?

I have no idea how to do that. Is there a tutorial for how to get a screen shot of an item?

Do you play on ios?

On android (Samsung) it’s done by pressing home and ofd buttons for a second. 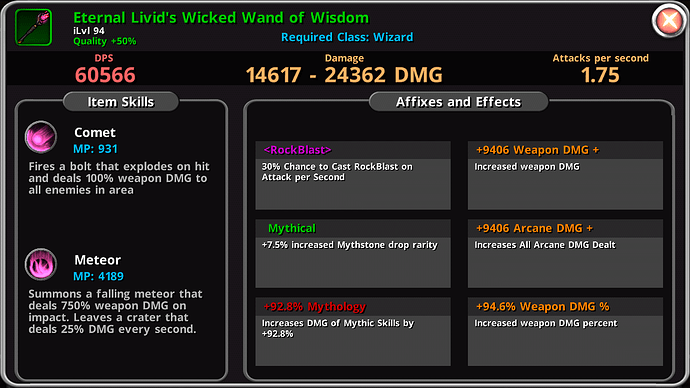 Here is a screen shot.

nice try to hack an item and get it approved bro

There’s a bug that changes the name of Eternals and making use of the 4 empty slots to create a Mythic in the Mythical set. This is not a hacked item.

He is obviously trying to get it approved by posting on the forum. I mean isn’t it totally OBVIOUS that he is trying to do that. How could anyone think any different than that. Cereal-senpai teach me your ways of observation and combination of facts

It really wets my whistle when you have to deal with such people.

Thanks stieger. @Cereal if I was gonna hack an item wouldn’t I had just made its name correct if all of its stats are legit? Wouldn’t I have also made it lvl 100?