I wanna hit in the billions constantly need some guidance 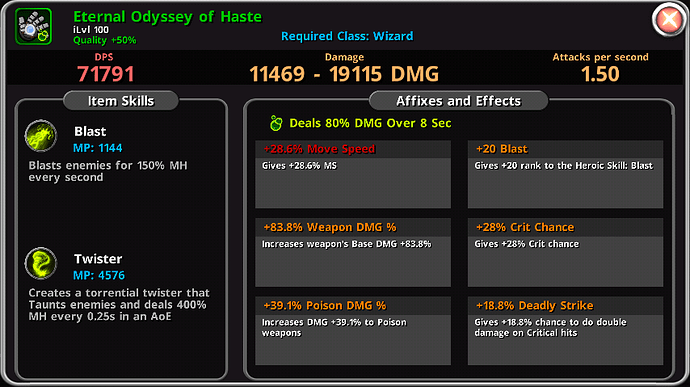 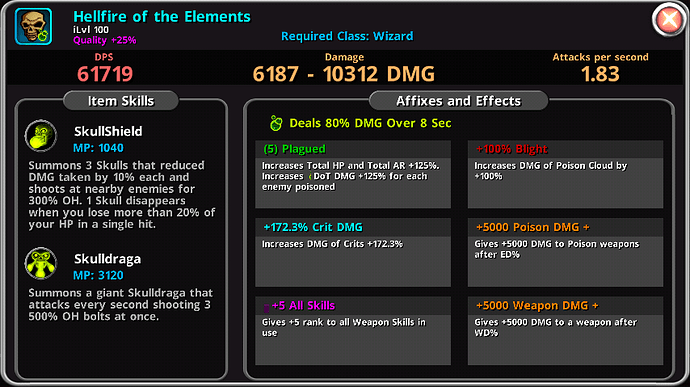 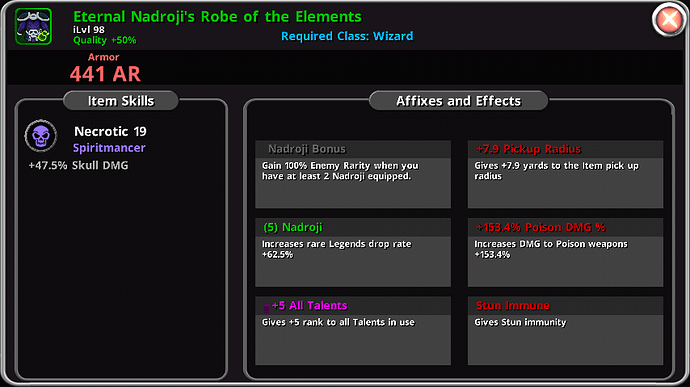 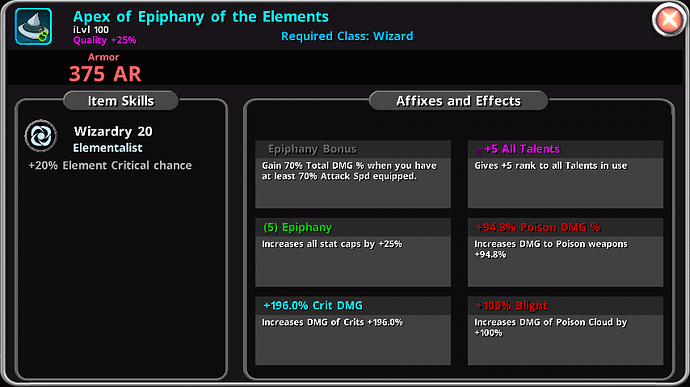 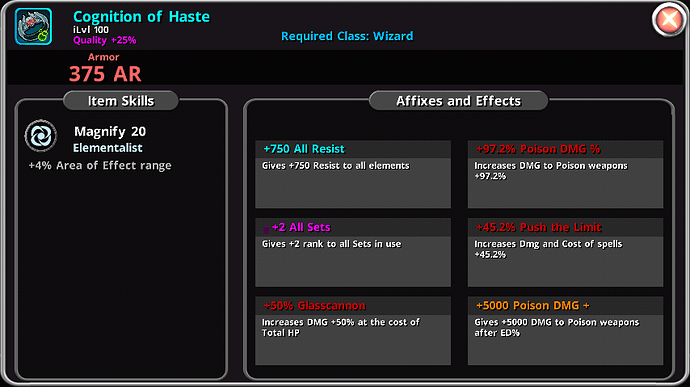 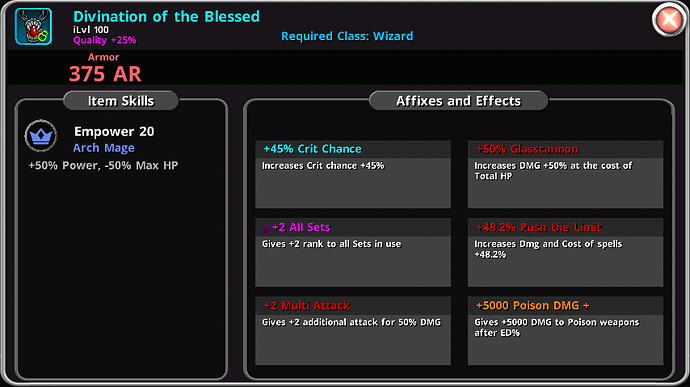 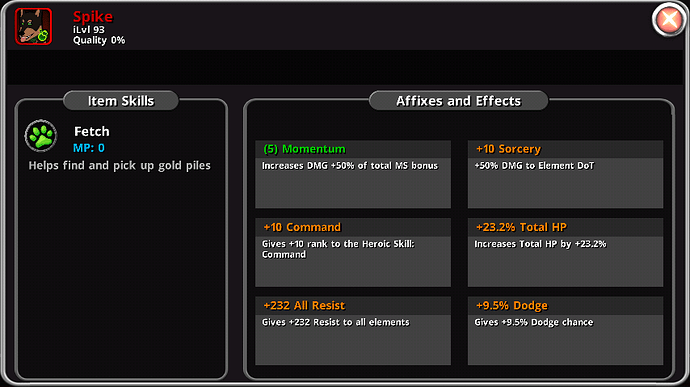 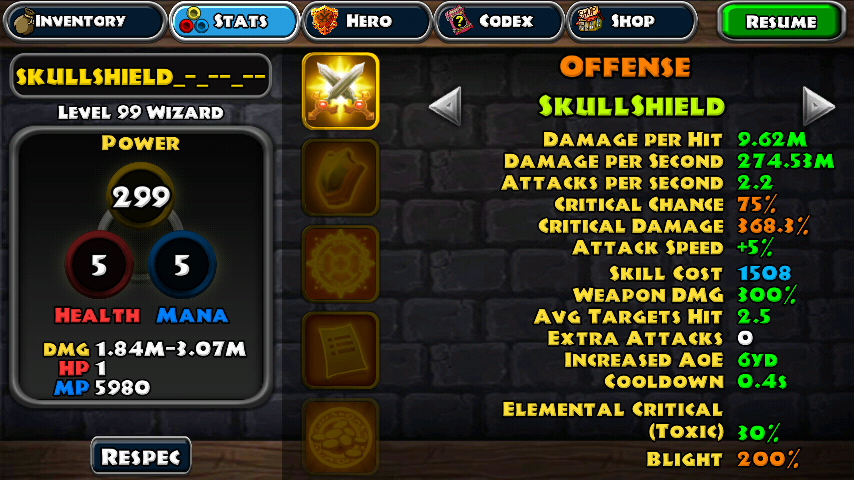 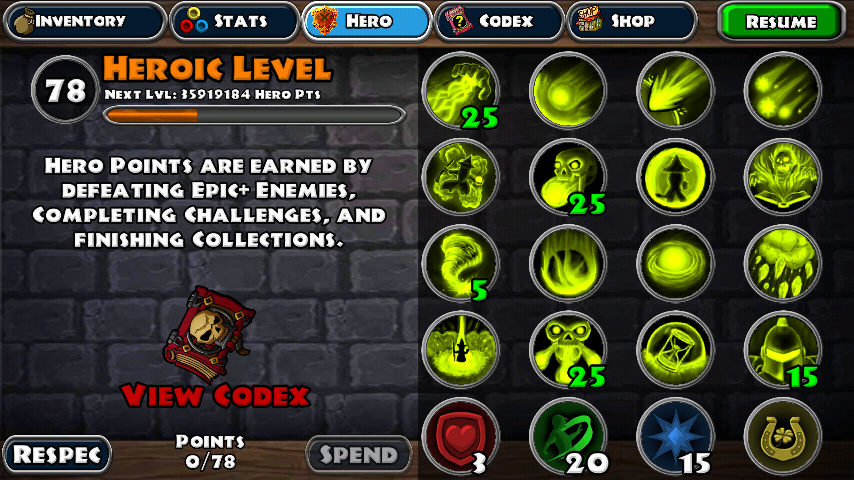 lets try billion dmg using a nadroji for PVE you need a adventurer also vampiric touch add some move speed affix because you are using momentum. You can remove pickup radius can also change your MH if you want tho

Alright should I try and get the aether wrap for the poison DMG?

@Shannoo w/ ur current gears and build it would be far difficult to deal constant billions u need to change lots of affixes. if u wna deal billion w/ this build of urs w/o changing lots of gears and affixes just add 30%crushing blow thta should do the trick . also dmg are somewhat base on floor the higher the floor the greater the dmg.

set affixss u might consider for inc dmg of ur poison build.

defiant, momentom, adventurer, spellswors(inc ur resist) (use wiz talent inc ed% base on ur all resist if u use spell sword)

add some blight elemcrit and 5000ed

remove all unnesessary affixes. are u doin for farming build or dps build?

Some opinion I would say is:

Thats all for now, remember that this is only my opinion and just recommendations…

Use Crushing blow and Deadly Strike x2 each

Add 1x 30% elemental crit from ruby to replace one of the affixes such as 5k poison ed.

Change wizardry 20 into Amplify 20. It’s always worth it to have 40% extra dmg no matter your element. Even single element builds still deal alot of nice dmg with amplify. It should be a must have because it’s free 40% more dmg.

Also change magnify 20 into Astral 20. 3% Ed of your over 1k resist can mean over 30% more ed% gained. Goes really well with resist shrine too

These are just some suggestions that may help with your build.

@CuzegSpiked
“Amplify 40: +80% DMG for each Elemental DoT on enemy”
can you tell me how amplify works? i thought it only boosts elemental DoTs like poison, fire, and blistering, and maybe normal bleeds? or does the DMG increase work on all dmg, and the condition is that there must be an existing DoT, and it will boost 80% DMG for every kind of DoT?
case 1:
80% dmg for all kinds DoT type of dmg? example: poison DoT will deal 80% more dmg, bleeds from bleed affix on any element, fire DoT, Blistering
case 2:
+80% dmg, as in all kinds of dmg, like having the empower buff? 80% for each elemental DoT? what if you got ascendant set and bleed chance affix, lol there will be at least 5 bleeds which means 80*5= 400% DMG zomggg

It only works on elemental dot such as shock, poison, fire, ice and ascendant. I guess arcanist counts as dot because its debuff over time with arcane so that should be included as elemental dot too. Bleed isn’t elemental dot.
It means for each elemental dot, I’m pretty sure that all my dmg is increased by 40% each. Hard to skip such a big bonus, especially on multi element builds or multiplication builds such as arcanist, frozen and plagued builds. Even single element builds get huge buff from it.

Correct me if I’m wrong though.

Wow if u have 40amplify that’s 80% each. DoT will be easy to apply with just prismatic. I thought D means dmg, not debuff

Still gonna test it later with prismatic and amplify

so if you can affect an enemy with each of the said elements. you gain additional damage depending on the rank of your amplify.

this would be great for ascendant-elements build