Im in love with PVP

I am using skulldraga and skull shield as my main skills with an aftermath build and maxed metero ( which I rarely use ). Lots of easy wins . There’s a player called venificullus who is a very cunning opponent ( hats off to you ) and some exceptional builds out there. Best of all are the item drops. So here I am in the pub on dungeon quest in battle. Nice way to pass time for a 48 year old

Just dropped an eternal chest in pvp. Thanks

It’s easy to get a high rank in pvp. You will need to keep playing daily to maintain your rank tho since AIs generally can’t stop anyone.

Except epic hero points from epic affixes and legend affixes. Affixes such as 2-3+ strength, 3+ orb, 6+ torrent in epic affix all work in PvP. That’s also why the eternal divination is so popular apart from the Balance above 18% , ED and resist.

I think the clarification helps though. When I first saw someone post that hero points didn’t count in arena I took that to mean affixes that boost hero skills didn’t work either.

I would love an updated arena FAQ. I think up to 20% of my arena affixes may be either useless or not optimal… 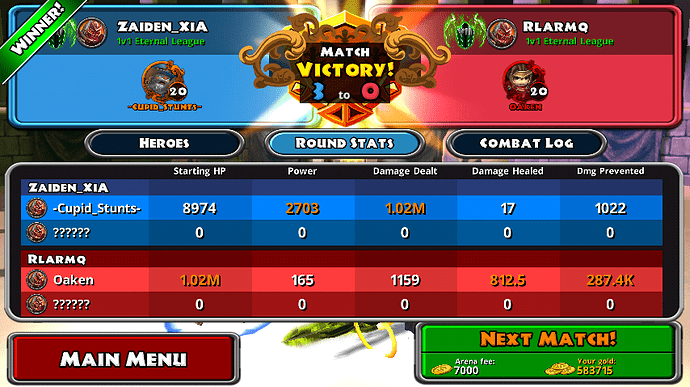 The draws were real yo’

Just goes to show EHP is the real stat. Too bad we don’t get to see an arena stat page which puts us math dummies at a disadvantage.