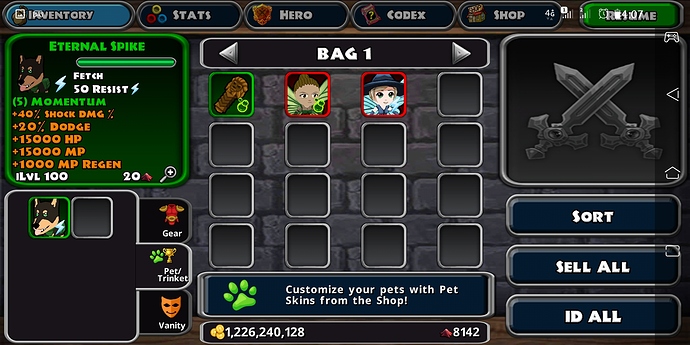 I have eternal fauna with 150% luck lol

The problem is, I’m not good at set combinations

I didn’t understand how to use Sets in my Beginner Days, but after using more and more of them in Builds, or just testing them in a few maps, my knowledge of which Sets work together is expanding. and I am still coming up with ideas of Set combos. not all of them work out the way I thought they would, but even a failure can lead to better ideas.

the other thing is that some Sets go well with almost any Build, and others only fit into a specific Build or specific type of Build.

for the Eternal Spike you have shared, here are some ideas.

Momentum Set: this Set gives you extra DMG based on your Move Speed Bonus. you would want some extra Move Speed on a Build when using this Pet. +40% Move Speed or higher is best. the Cap is +100%.

MP Regen: Druidic Set uses high HP & MP Regen to boost the DMG of Poison DoT DMG if you wan to make a Poison Element type of Build. Plagued Set would also be good if you went with Poison.

Dodge: Pathfinder Set uses a % of your Dodge to increase DMG & DMG Reduction. +60% Dodge or better works well with this Set.

HP & MP: a lot of HP & MP is good for PVP, but for PVE, it is good for Farm Build or beginner Characters. on higher Floors, monsters get so powerful that they can one shot kill you, so HP isn’t very necessary. an Equality Set & Equivalence Mythic Combo could make use of the HP & MP on this Spike, or a Blood Magic Mythic. a Masochism Set & Defiant Set and/or Blood Magic Mythic combo could make good use of this Spike also. the extra MP could make it easier to use the Hunger Set.

these are just some ideas, hope it helps make your Eternal Spike useful & happy!

you never know how good a Pet can be until you try it out. my Pathfinder, Momentum, & Demonic Pets get the biggest work out on my Builds, and some of the others I have some ideas for them, and a few others I want to at least make a test Build with them to see if I want to keep them or, umm, convert them to Dust or sell them.

here is a story I wrote after I used my very first Slime Pet in a few Adventures.

hi, I am Oscar the Forest Slime, and this is my story. I grew up in the forest, and it was great! when I got cold, I went to the rocks to get some sunshine, and when I was hot, I wandered in the shade under the trees. and when I wanted to play, I went splashing in the stream, because splashing is fun! and it feels good too! but I was lonely. so lonely that it hurt. it was because I was different from the other slimes. like when strangers came to the forest, the others attacked right away, but I …

I hope you can take your Spike out on some cool Adventures and maybe share a story sometime.

Men I just Max level my main wiz to 99 with 6 ascend, the grind was tedious but I’m glad I’m in a good pace.
And considering this pet, since I’m I wiz, my choices are limited to few. Thanks for sharing, need to read this. Man you’re the real MVP.

Also if your like me and dont have a good pet just build one from a legend or epic pet even. I have a defiant set pet which I guess is okay wish I had momentum or pathfinder tho. But all pets can be used just make sure to find a pet that will boost your elemental dmg from its special afix like 10 percent dmg boost for fire ice or poison

all my early pets were worked up to Epic. when I started using Legend Pets with a Set Affix, it felt weird being short one Epic affix.

@Mikeb120 are you sure you have a Pet with Defiant? there aren’t any listed in the Codex. maybe you are thinking of Druidic. and the Pet with the +10% ED are Slimes!

my first Legend Pet was Shibe, which I sold a long time ago, but now I wish I still had it. never thought I would make a Build with Permafrost.

Did I make I huge mistake? Actually before having Eternal Spike, I got Eternal Merlin’s Imp,/ first, but I cleared it and rerun again using cloud save and got Spike. Did I miss a good pet?

Merlin’s Imp with Seven Deadly Sins…that is a tough Set to work with. most players just use that Set as a farming build.

@dickwad made a few PVP & PVE Builds using 7DS and started a few Threads on the subject. 7DS items aren’t easy to use, but with a good imagination and some testing, some good ideas were made reality. on top of that, Merlin’s Imp doesn’t drop very often. I only have one and am saving it for when I am ready to make a 7DS Build of some kind.

I haven’t done anything with 7DS yet, but it is on my something to do later list.

I may revisit the deadly sins some day. 4 all sets become 2 in pvp? Merlin makes all sets one. Each set has percentage bonuses

in the long run, it would be faster to just make a Pet Farming Build and farm for Pets like crazy instead of wasting time going in and out of the game reloading from the DQ Cloud. isn’t there a 3 hour wait on that?

I actually got my Merlin with my Floor Climbing Build, but I have been playing for a few years. if you straight up just farm for Pets, a few days to a few months should get you a Merlin, hopefully if RNG doesn’t want to make you wait.