Lucky to have this ? or lucky to convert? 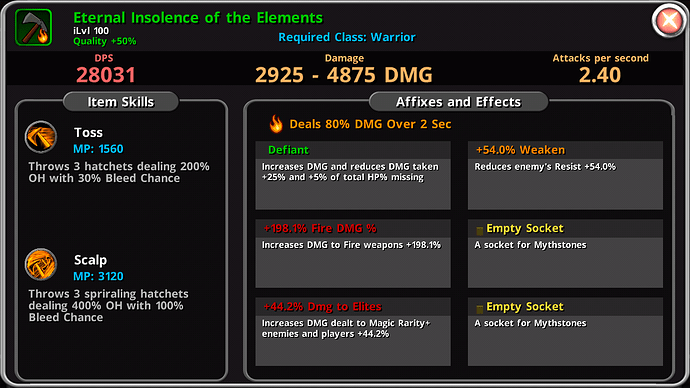 Once, I have also looted an eternal insolence so I kept it for some times but then I realized that it will never be compatible with my builds, which I am a proud horn-user, so: convert it is. But here is a thing. It is a very good item with outstanding stats and if you’re one of those guys who have tons of crystals then it’s worth the try for an experiment.

@eater what do you think build for pve or pvp ??

Nice item i think you can use it for PVE

For me you’re lucky because i’ve been farming on floor 500 for 2 days now and haven’t gotten one yet.

The problem with eternals is always this: You can’t choose their stats. They might have better affixes, but in 90% of cases, they have no synergy. Unless you get a total beast eternal with 190% weapon damage and crazy stats, a normal legendary will be better in almost all cases.

This is pretty much the situation here. The 200% fire damage is huge, but the other stats are pretty weak - and the two sockets are even worse because socketed affixes aren’t doubled.

I suggest you just convert it and hope for obsidian.

This one’s worth keeping. This will be good for PvE builds. PvE would give you more flexibility and you dont necessarily need 6 crystal affix slot all the time. And those 2 empty sockets can make up for the difference.

There are 3 affixes on this item that have their values doubled. Weaken and Danage to elites are pretty worthless in PvP. There are WAY better affixes for the two slots taken up by the sockets. What are you gonna put in those? 10% Deadly strike? +4 extra attacks? Most epic affixes are equally as good - if not better than a socket.

What you are essentially saying is that the +200% fire damage is worth more than 3 other affixes and that each socket is worth as much as an epic affix.

I beg to differ. I bet a normal version of this item with the right affixes is better than this eternal one.

He was asking if it’s worth keeping or not.
It’s not about which one is better

That eternal is pretty good dude. almost 200% Fire Dmg. and its very useful in pvp because of its dmg to elites with Bloodmagic.