Wild has been gone for several weeks now. To what parts nobody really knows. How I do miss her company. I look forward to the day she returns. She has been a good friend, and is sorely missed.

The Wizard I met previously has made it to level 50. He seems to be doing well for himself. Emrick the Thule I believe he calls himself. He wears a Gauntlet, and carries a Great Book laced with fine silver and gold. I have traded him a few of our trinkets in exchange for a few of his own. Much to my surprise, the Orb he traded to me converted to a fine Bomb. I added it to our (Wild and my) arsenal. What to do with it only time will tell.

I also met a Warrior. When I first met him, he was cursing the heavens. When I asked him what was wrong! He said; “The Gods have cursed all Warriors in these realms. Nothing in this place is sharp enough to skin a rat with, much less slit my own throat, or kill a toad.” I started to say, well maybe you should be a Rogue, but thought twice about it and declined from saying as much. I instead offered him an Ale at the Inn. He said “Thanks, but no thanks.” and wandered off muttering to himself.

Wild and I, still only level 200 plus with several thousand maps to go. We seem more like old timers here, compared to these young pups just starting out. Wild loved a good challenge. Maybe thats why she moved on. Me? I just like farming the dungeons for Crystals, Mythstones and Gold. Fame is not my objective. I seek Fortune. I have all the luck and fortune of the God’s to make it so. I also have Wilds Bow. I may not make it to map 2000 anytime soon and I may need a warehouse for all my Treasure and Gold before doing so!

I was sitting in the Inn when the Warrior I met in passing walked up to me and said; “My apologies for my poor manners, and haste previously. I am not usually like that. Let me formally introduce myself I am Gaelid of Iesenthorph.” He went on further to thank me for the gift I had given him. I worked all night on it based upon what Wild had taught me about Alchemy. I procured a Golex Gauntlet from Emrick the Thule and went to work on it. It turned out to be a fine Axe, many times its worth. Sharp as a cleaver and fast as lightening in combat. In fact so fast as Gaelid explained to me that he later changed the secondary skill to something more helpful and appropriate, Storm an Area effect weapon. In exchange he gave me a legendary lance that he had found. “Oh my.” I exclaimed, not quite sure what to do with it. He then offered me an Ale and we drank till morning telling our tales. The thought crossed my mind young and clean shaven. Oh my! The words I had told Wild come back to haunt me to this day. Hmmmm

I have an abundance of Crystals much thanks to my trading. So I decided to tweak the Wild’s Brontes (King) ring that Wild had initially given me. I replaced the Epic affixs with other Legendary procs. The results have been extraordinary. No other proc item or affix is necessary. Maybe someday it will go from Legendary to Eternal. Wild’s Ring of Sorcery. A tale of complete Alchemy.

Wrong sequence of the storyline. So sorry. I already had the story written, I was just waiting to get YouTube strsightened out before proceeding.

I have tried to tweak the Brontes ring to the best of my ability as a Proc ring. I keep it in a box made of silver in memory of my BFF Wildwood. Every now and again, I take it down from the shelf and wonder to myself. What to do with it that hasn’t already been done. I am committed out of friendship to keep it, and I’m sure in the spirit of Wilds Alchemy, something more WILL be done. The world of DQ is constantly changing, so is its Alchemy. 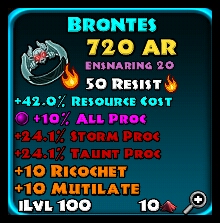 I have been so busy, that I totally neglected the Arena. Hey! I just made it to Legendary Status. Been gone so long, I almost forgot how to! Here, take a look…

These Pistols with my Affixes, and secondary skills are proving to be AWSOME!

I’m guessing that in the Arena the amount of damage that I do is more than enough. And when I can home in on them with Blinkstrike, and then bomb them. They don’t know what hit them.

Of course there are preventions that can counter both Blinkstrike and Smokebomb. But I have yet to find anybody that can deal with them both.

I can akways just vault away, can they?

Secret is to fire away, until they get close.

I get 300% damage per shot with elemental crit DoT 8 rounds per second over 2 seconds. With over a million damage a second.

My math ability does not go rhat high.

I don’t really know about PvP but in PvE. According to the hit report not counting DoT I get 2M or better some times on a single hit.

Take a look at my stats. 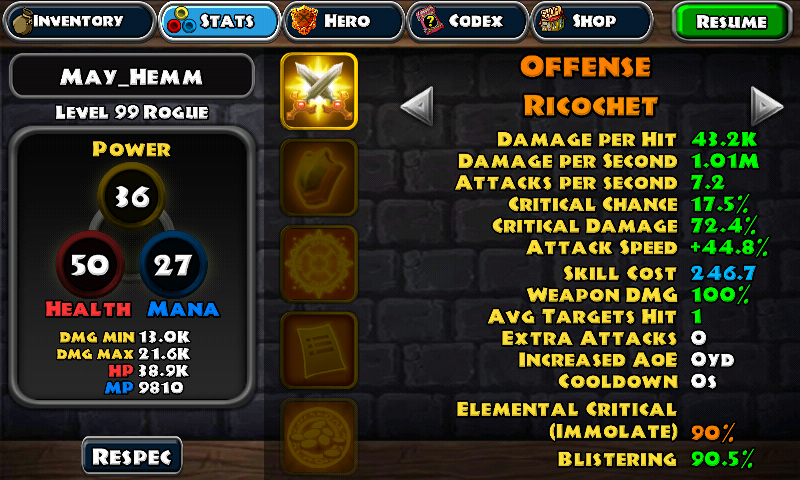 Thats right, 90% Immolate, with 90% Blistering. DoT. Not to mention other ED bonuses.

Back to the storyline.

I have been so fortunate to be blessed with such good friends, not only with Wildwood for lending me her experience with DQ Alchemy, but also Gaelid, and Emrick for sharing thier loot with me in exchange for a few trinkets.

Both of my friends, Gaelid and Emrick have teamef up together. They are almost at level 100 as a team. I do not know yet, how that will effect thier individual ability. But they sure seem to be having fun together.

Gaelid thanked me for giving him a Nadroji Crystal. Emrick, simply jerked his head and laughed in agreement.

Emrick is a Thule, he don’t talk much. (grin)

Yep but 30% is more than enough honestly for most people.

2 slot for that so much expensive huh ?

Immolate creates blistering and blistering creates bleed DoT. At least that is what the rules suggest. Granted the Immolate score is a little high and does not need to be. Especially with a rapid fire rate on my weapon.

On the otherhand. Blinkstrike and smokebomb is a single attack with an AoE. Having a high Immolation % helps to guarantee ignition.

I have seen the Cart go up in flames and die from DoT by a Blinkstrike and smokebomb combination. While I vaulted away out of his reach. I have also seen a group of monsters surround me and perish from DoT by smokebomb, before they even recovered from blindness. Having a high flashpoint does help in triggering the other crits, even if there is a cap on the amount of damage being dealt. Without immolation there are no secondary and tertiary criticals except from other methods. Just saying… …immolation is the % for flashpoint, not the amount of dmg being done because of it.

Thank ya’ll for the comments, it has given me a few ideas.

Since Elem Crit have a cap,the extra Immolation chance just waste ur affix slot.
One Legend Elem Crit affix should be enough

Yup that’s what I said.