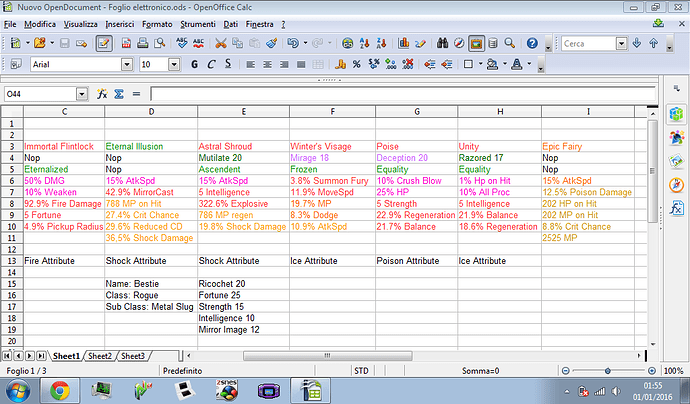 My progress on my Metal Slug rogue

As you can see, it’s so random… But i can still crush even resistant enemies with a few hits. Suggestions and comments on your parts are always welcome

And happy new year to all!
Ps. The fairy is Poison Attribute

What lol floor are you running?. Also what is your difficulty lvl are you on?.

Well, i basically made this post useless by getting Rage as a pet (Yay second legend pet) and swapping the cap for a Jester Cap. My damage just… Skyrocketed lol. I’ll update it in a week.

My understanding of damage (even with ascendant) is that all items should be the same attribute. Am I mistaken?

To maximize damage, yes. I just do it because i spread elemental damage around (Plus i crafted a skilled armor so i dont have ascendant anymore)

If you don’t have ascendant it’s useless to spread elemental damage on more than 2 elements (MH and OH) because you’ll never use them, and even then it’s best to keep 2 focused on. More damage > more effective damage, i was just playing around trying to get some Mythstones.

According to this post, even WITH ascendant it is useless to have more than 1 element, because all the extra elemental damage changes too.

No, Elemental Crit DMG affixes are independent of the Weapon Element. You can use Fire and still have High Voltage. If you are using an Ice MH weapon with Ascendent or Prismatic, Ice DMG %, Ice DMG + and Freeze affixes will apply to the element that they switch to. So if you have +100% Ice DMG, +5000 Ice DMG and 10% Freeze, what ever element your Ice MH switches to due to Ascendent or Prismatic will receive the same benefits. However, lets say you have an Arcane OH, even if this Arcane weapon …

O.M.G.
Thank you so much, i never understood it.
Though i won’t use Ascendant anymore, i thank you

this could prove useful for someone else.

So with ascendent u have chance to attack with other element. When that happen, lets say u attack in poison element. your attack will carry that +300% frostbiting, 45% freeze, 30000 Ice damage. its INDIPENDENT, it will change to the attack element u do like poison it become +300% blight, 45% toxic and 30000 poison damage. except that permafrost set affix. only when u attack in Ice element it boost 50% ice damage at rank 5. so basically when u have set affix designed for certain element, it will only apply when u attack in that element, like inferno and permafrost,

i just explain that to him, i think u want to know that too.

I think I was saying that. Use this example instead:

That 10000 poison damage is always a bad idea, right? Instead, you want all the elemental damage to be the same type as your weapon?

yep, and sorry didt see that the question about double element as mh and oh have different element. Single element is better lol.

I might be incorrect, but aren’t Mutilate and Razored wasted if you’re using guns as your MH weapon?

Also, what does “Nop” mean in your spreadsheet?

Not really, Razored works even with guns because enemies DO bleed.
And for Mutilate, i am trying to get some extra attack chances since it works for EVERY weapon.
the “Nop” means tgere is nothing in that slot, like the mirror has no talent or set affix.

You can’t have two different type ED+ affixes on the same piece; all elemental affixes (save for sets) are based upon the weapon’s element.

You also can’t have affixes that give 20k or 10k damage, they cap at 5k. That was across all 6 pieces

True, but nothing WAS specified, so…
Oh well.