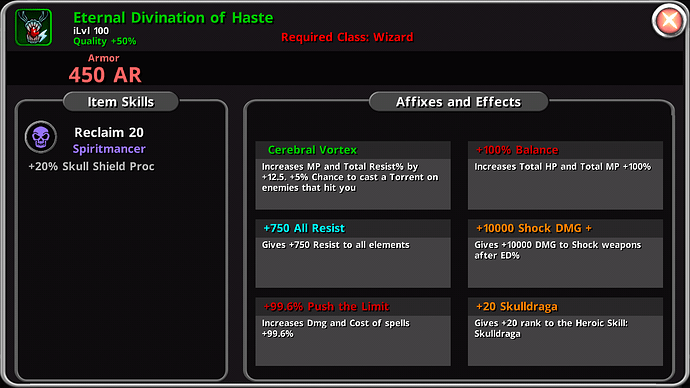 most people use this item in the Battle Arena, because you have to be hit by your enemy to have a chance to cast Torrent on them when they hit you. in the Campaign part of the game, this isn’t good on very high floors, since your enemies can kill you with one hit. on lower floors, this would be a good item, because you can survive a few hits by monsters.

Damage % is not used in Arena because it gets reduced 60%. so +100% Damage would be ~ +40% Damage. most players just use the Weapon Damage + and Elemental Damage +. +5,000 would be ~ +1,040. Sets that increase damage, or using Push the Limit, Glasscannon, or Barbarian. it is a balance between defense, HP, and attack. part of the problem is items are reduced to level 20 effectiveness, so some affixes become useless unless you have enough of them, and others become very important. and Hero Points are not used in the Arena, but Epic Points, like +10 Storm do put points into Skills. so if you had 20 Hero Points in Storm, and 2x +5 All Skills (10) and Epic +10 Storm, in the Arena, only the + All Skills and +10 Storm are counted. take a look at your items before you go into the arena, and then look at them after you go into the arena so you can see the difference between the two.