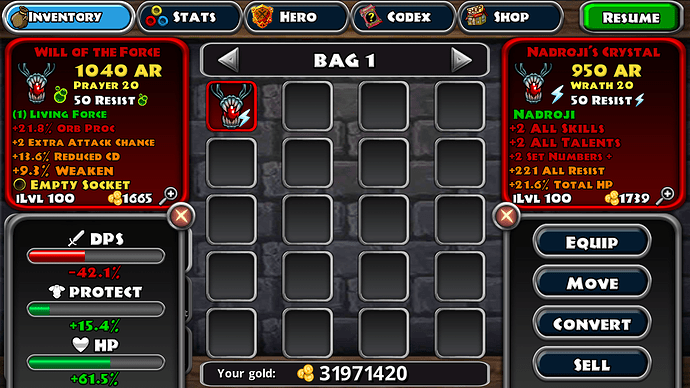 Now I am thinking of Jaspering it to rogue, since he’s my main farmer and my warrior is dps.

Now, I have an eternal (crystalline) hat, and an (eternalized) gun. How could I put in a (Mythic) set into my build? I know mythic only drops on hats and weapons, but do eternalized or crystalline drop on ring/chest/offhand?
Or would I have to craft one of the sets onto a separate item?

crystalline, eternalized and mythical cannot be gotten from amethyst and are only on weapon/hats naturally. You will have to choose which 2 you need most at any time.

Hopefully, they will make those sets available on other slots in 2.1.

Ah, okay thanks for letting me know. Might have to look into swapping my eternalized out for a mythical at some point, possibly once 2.1 kicks in and I pick up the eternalized perk.

Personally, I feel like I will eventually have more mythstones than I have any use for, but I don’t see myself reaching that point with crystals or eternals, so I don’t know that I would ever use mythical.

Well as a newer player I find myself short on high ranked mythstones all the time. Elixirs are the bane of my existence. Getting more low ms wouldn’t be bad for salvaging (I feel like converting anything out of the 5 lowest ranks are pointless) to get high stones from the reward.
Eternals are great but they are very hit or miss when you’re still shaping your characters to the builds you want. So I would prioritize ms over Eternals until you get your character(s) to a point you’re satisfied.
Late game, I would pick the opposite obviously. At the point where you have crafted gear and are stocked up on crystals/ms then Eternals are something to be sought out. 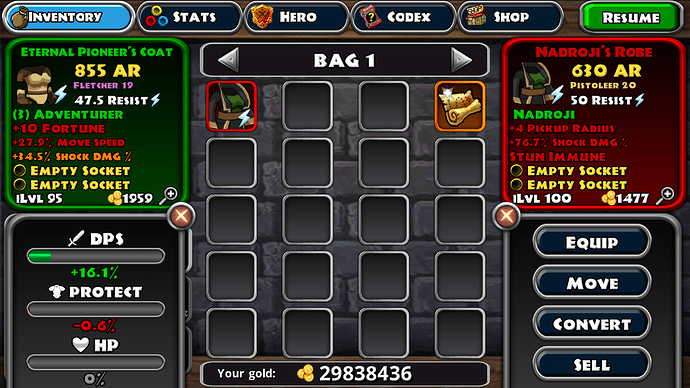 Guess I got lucky with the amulet, because it seems a lot more useful than the chest.

Don’t forget that eternals give a guaranteed ultra rare crystal when converting. That’s the fastest way to get them!

Keep that. Stun Immune and ED%+ are very desirable. PvP and PvE ready affixes. Many would kill to have that

kill mobs, that is

And convert crystal legends if you find them useless and never ever use them. Obviously only do this if you aren’t gonna use that affix for a build or craft but that all deoend on intentions. For eg, conveting a satyrs pistol with crysgal gol find is probably worth it if you already got a fortune bringer and don’t need it in future although that again depends on you!

And i got like over 8 nadroji robes and having an eternal one! You are rught in the fact that many would kill for one. Me especially when i never had it.