Need some help with nadroji affixes

i see many of you working hard to get nadroji set items …
Well, don’t really ask me how, i dropped this nadroji crystal at map 113… The only thing that i can say is that i capped item drop (and money drop bit ofc is not that relevant)…i feel really lucky, Also because i found that ready with crystal affix!! And alla that legend affixes! I want you bros to help me affixing this item and make it stronger… Take in mind that id is already capped without necklace,so i don’t need legend affixes or mythstones in that…thanks a lot!

Don’t worry about MS or CS, my plan is to collect a lot before “full modify” that, and i already got some nice useful stones (i have at least One of all MS and alla CS except obsidian)

P.s.: what affixes and mythics(are mythics that relevant???) should this have to be THE BEST item for itemdrops? I mean, which are the actually best affixes on this? That ofc should take months of gameplay to get that…

I had a very similar drop, this is what I did: 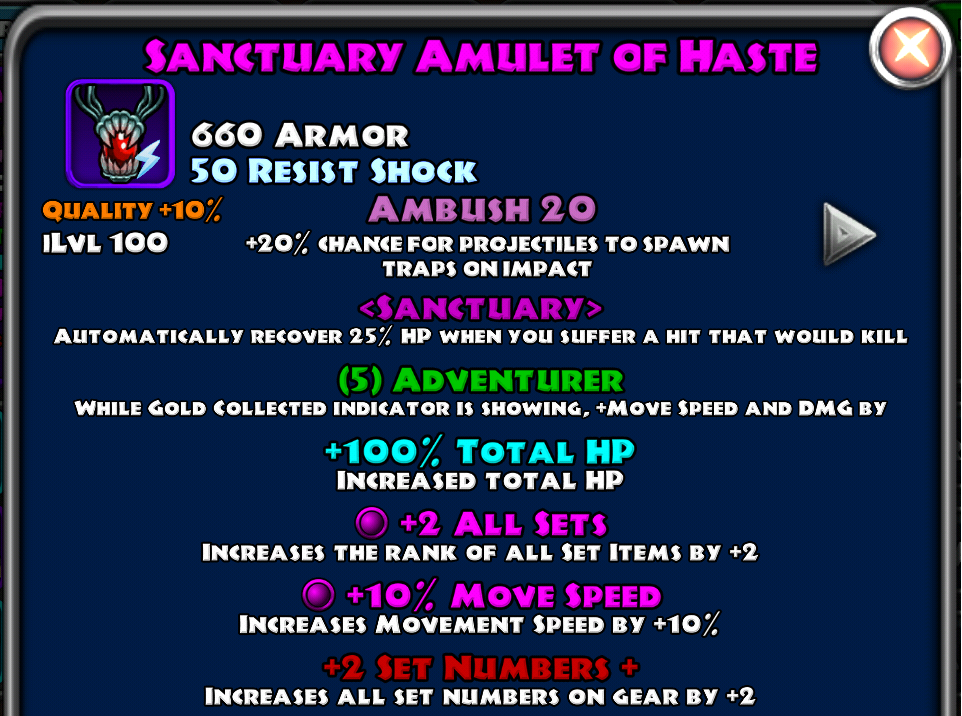 Oh wow! So the only difference is the mythic… Is that mythic that relevant or no? I mean… I don’t really want to delete 4 affixes for an unuseful mythic…thanks

I also added an Adventurer set affix for the lulz. Gold piles become “potion orbs” and is much reliable than draught. 37.5% damage isn’t much of a boost, but 37.5% move speed is.

The makings of a true ninja

Hahahah yeah that’s a nice set, i have that too in my (One and only) equip!
For the mythic… I think i’ll just wait to “upper” floors… Floor 117, they barely hit me and make me some “important” DMG…
Am so sorry for my english, i feel Like a fart when i have to explain something

In your opinion, what are the best 6 mythics (Mh,oh,armor etc…) for item dropping and farming? They are many and differents , and sometimes i neither understand their effects

As far as I’m concerned, there’s no mythic I can call “for farming”. However, some of them help with damage.

My first best mythic for “farming” will be Bombard or Cyclone proc, merely because they have good coverage compared to other Mythic skills. I’m biased toward Bombard though, as it is a “set and forget” skill whereas with cyclone, your character can’t do almost anything when it executes.

Thanks for helping a newbie

any other suggestions? Would be very useful [SMILING FACE WITH HEART-SHAPED EYES] This weapon is too much good for farming gold and loot ,put 40%luck rune on it to make even better farming sword

if you need item drops fortune ftw. max it to 200% ^^
elixer if you need the +2set on the nadroji crystal capped for set is 4 btw.

I agree put a fortune mythstone to it, look what i did to mine…

Although I’m against going full stat stick on MH, that is one hell of an awesome loot object

Im farming with a hireling, so hireling is the nuker,id and damage… main toon luck id gf and the like…

For me, IMO a balance of loot affixes on both toons is best, if both characters are online on whacking stuff = ultimately, less time doing the maps.

It’s kind of expensive to craft dedicated farming gears of course, but for me it’s worth every stone.