Just found this game and really like it but the gear stats are confusing. Like why does my dps go down if I equip this epic orb which looks way better than what I’m using? Thanks. 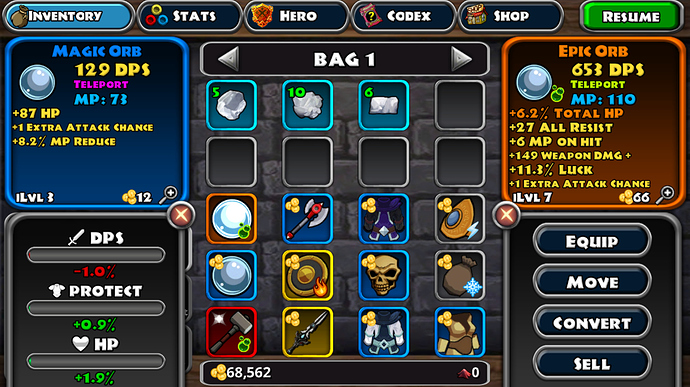 Don’t know but I’m guessing that the extra attack chance and less magic requirement on the magic shield may have a role to play? You attack more and use less magic so you can attack more again maybe ?

I just do summoner and procsters. I’m sure @Mr_Scooty or @Golem or @CuzegSpiked will answer your question very soon

@Quewbism there was a discussion about that months ago, and some decided not to use that as a guide for the gears, since the information it gives can be confusing. best to do the comparison based on how they look on the stats page. I think that because the Orb you have equipped has MP Reduce, which means less MP usage, where the Epic one uses 37 more MP per use, so run out of MP faster, which can cut into your DPS if you run out of MP in the middle of battle, and get stuck using your Default Skill (this is the damage you do when you run out of MP). but that is just a guess on my part. MP Reduce reduces MP per use by up to 40% for the weapon it is on, so you would need 1 on each weapon for both weapons to benefit from it. most players don’t use it, as most builds don’t need it, and takes up space for better affixes. there are a few builds that could use it, and it is a good affix for new players until they find better ways to keep their weapons powered up to smash monsters.
Edit: do a search using DPS Protect HP and you will see a few discussions on the subject.

@Golem It’s not about the Mp reduce. It’s about the element. Try to change the element of that item to Arcane. it will definitely go down because he’s using arcane element not poison.

The calculations on that screen are not 100%, I believe. You need to check your stat pages

@thunderbringer I didn’t notice the different Elements, good call, but neither of those 2 items have Elemental Damage boosts. it could be something to do with the Natures being different in a way that affects DPS, but thank you @Skaul for pointing us to the Stat Page for better information.

It’s about the elements and the nature of it

Maybe because of some elemental boost damage present on some other gear that he equipped on.

@thunderbringer I guess if he had an Arcane Element damage boost on another item, then DPS would go down since Orb is Poison.

What exactly is arcane damage ? I still don’t know after 9 months

Thats what I exactly saying

@dickwad when you first loaded DQ onto your device, all weapons you started with did Arcane Element Damage. the Pink Element? monsters don’t have any resistance to Arcane Element, but they can be Greatly Resistant if they have the Greatly Resist Monster Affix. the Elemental Critical for Arcane Element is Orbit. it shows as Spheres of Arcane Element that fly around the caster like Scalp, except it is only one Sphere per Crit. if you crit a lot of targets at the same time, you can have multiple spheres flying around, and they are affected by Living Force. if you are in a pack of monsters, lots of spheres could be flying around. but their orbit path is similar to Whirling Blades, and they don’t follow you when you move, so act like Scalp in that respect.
another thing I have noticed is when you use Prismatic. if your weapon is Arcane Element and you use Prismatic, 5 different Elements will show. but if you use any of the other Elements (Poison, Shock, Fire, or Ice) with Prismatic, Arcane Element wont show up, but the other 3 will.

Need to test it out in arenas