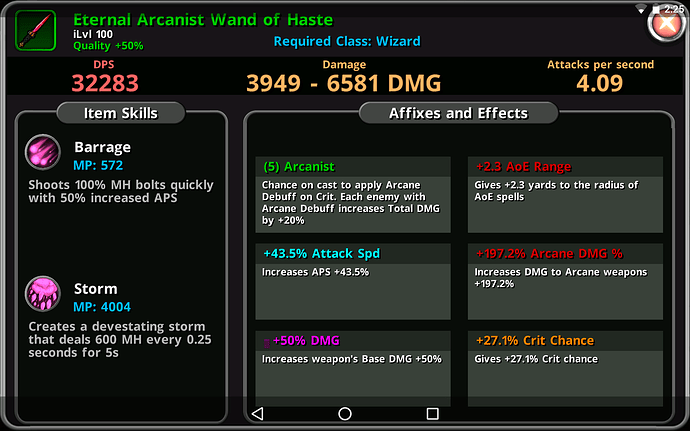 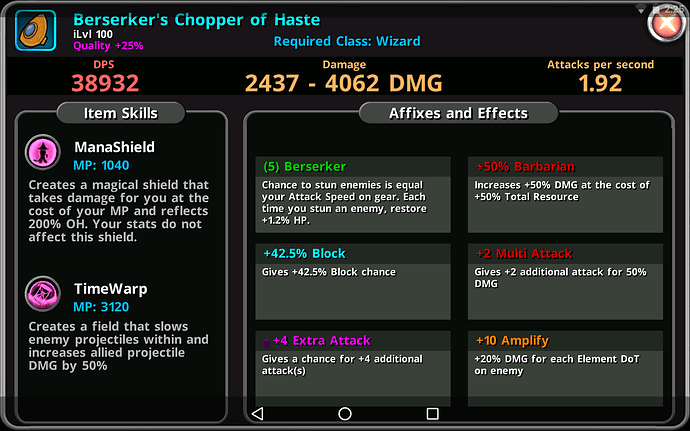 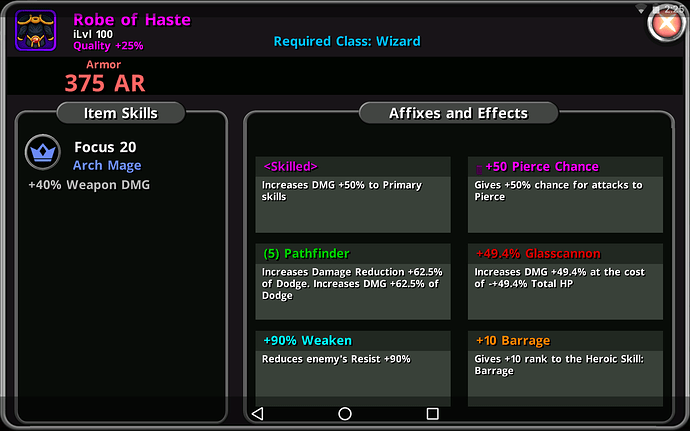 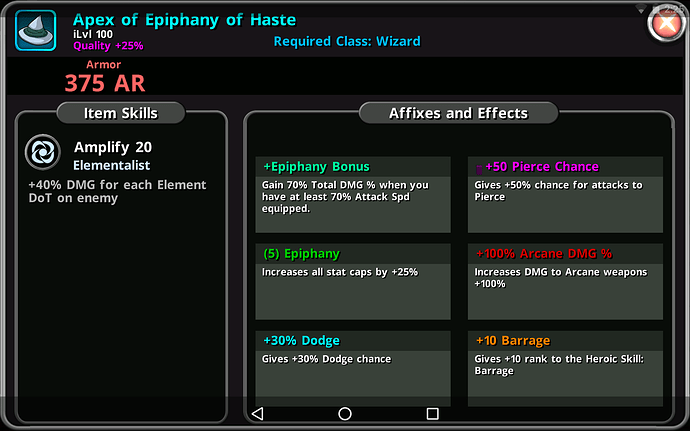 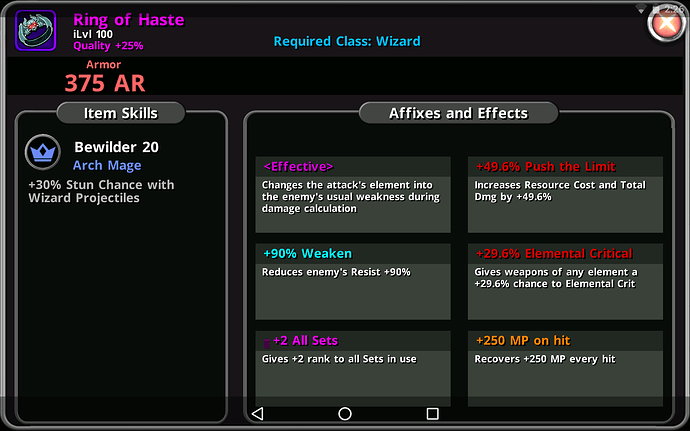 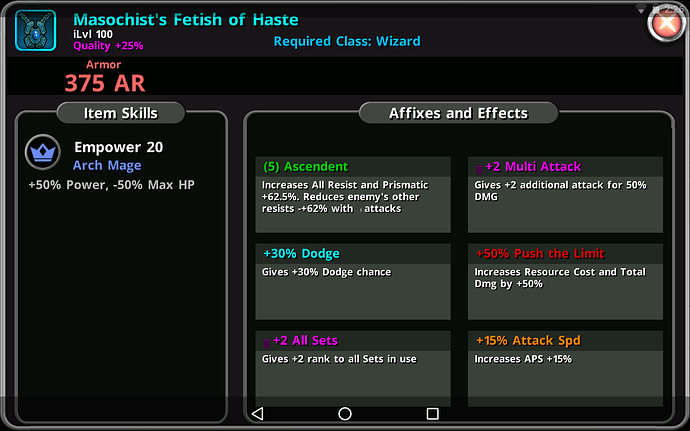 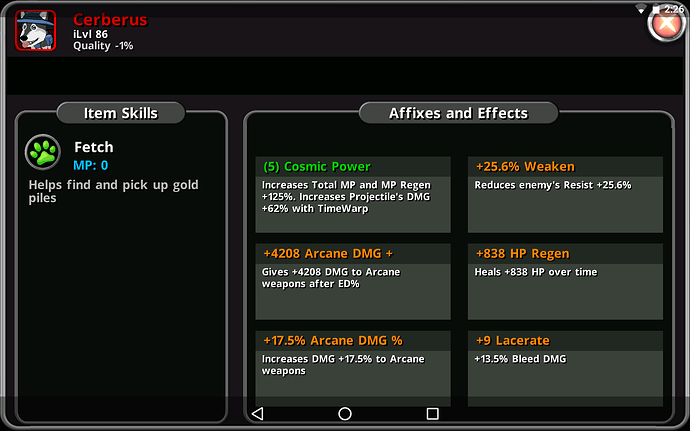 Many amazing changes have been made this patch and this build is here to show off a few of them and just generally be extremely fun to play around with! now on to the build explanation and a gameplay video!

Where you can find the component legendarys:

Wand: WOO now this is the main new and cool component you can find the new Arcanist gear above floor 800 on mythic 3 difficulty for the purposes of this build we’re using a crystal eternal Arcanist wand snd yes RNGesus was really loving me that day
Side note: yes this item no longer exists in the fashion depicted here however the change from ele damage% to +weapon damage is a good one and will over all result in higher potential damage when optimised

Offhand: The berserkers chopper this item can be found above floor 400 on difficulties mythic 1 and higher

Robe: Literally any random robe this is important because legends buff the minimum rolls on gear but otherwise you can craft this one from scratch

Hat: An Apex of epiphany found above floor 600 on difficulties of epic and up

Ring: Cognition you will know this ring from such places where it is used as PvP, PvP and ummmm PvP but anyways this ring can be found above floor 400 on mythic 3 difficulty

Amulet: Masochists fetish this item can be found above floor 300 on mythic 1 difficulties and up

Arcanist: now this is what you all should be hyped for (actually you should be hyped for all of the new sets they’re all really awesome this patch) this set is insanely sweet remember how you all used to think arcane sucked well step aside poison and ice there’s a new damage ramping set in town and this one isn’t quite as powerful but is 307% more fun because it makes ascendant builds viable. Arcanist makes it so that when you cause a critical hit you apply the arcane debuff to enemies and every enemy with the arcane debuff on it boosts /all/ of your damage output by 4% per rank

Berserker: this set is there because with the extreme amount of attack speed this build has it is able to permanently keep enemies stunned with in the period it takes to kill them

Pathfinder: 60% dodge is important at high floors so pathfinder is there to make it boost damage as well as survivability

Epiphany: Fun this is here for the pure fun of having even more insane attack speed

Ascendant: Fun again! ascendant is one of the most fun affixes and with arcanist it gets a nice buff and becomes viable!

but this is awesome because of the insane number of missiles that the build outputs!

Weaken: now here’s the interesting one! Weaken has been buffed massively! the cap for weaken is now 200% you can make your enemies have negative resists now!

Effective: with ascendant this always gives you the elemental advantage bonus when it comes to damage calcs!

50% weapon damage: this is fairly self explanatory

+4 extra attack chances: because this buff to zenith is awesome and more barrage!

+50 pierce chance: pierce from zenith has been fixed and buffed! 2 ranks of this give 100% pierce chance and it makes this build insanely fun

+2 all sets: because this is a requirement in all builds

Elemental critical: it would be a shame to not capitalize on the ridiculousness of ascendant right?

Crit chance: the near 40% crit chance is more then enough to activate arcanist when ur firing 5-11 missiles from each barrage!

250 MP on hit: to sustain the hellish barrage of missiles!

And that’s it for the build! I hope you all enjoy the 2.3 patch!

Monsters become immune to stun just as players do. The continuous animation you see is the stagger effect. I thought it was stun too but it is just monsters reacting to being hit.

2.3 has dropped and so has this build

Wooo! 2.3 has dropped in the bag! I will release my fire shock build but I have a few little changes to make before I show it to everyone. The reason is that because sprint is nerfed to giving 25% move speed, I will have to do another way to get almost full move speed. That other way is likely either synergy with tome or draught.

Congrats on amazing concept of a build! Underdog builds be underdog wins.

This build is so cool!

Hmm, i have a question, like your other element’s damage will do less damage than arcane right? Arcane % damage only boosts Arcane damage?

I know heh, i meant your arcane % damage, why do you have it when your attacks do all sorts of elements(according to the video)?

And also another question, why dont you use Elements set affix as well?

No ignore resists and Weaken do not work with each other

Thnx. I thought you can make enemy elem resist more negative (-200%). Conclusion would be, least enemy resist possible is -100%, ryt?

Do you see the 197.2% Arcane Damage? So what you really mean is that the 197.2% Arcane will change elements when the elements are changing when shooting barrages? Like the barrage changes to fire element barrages, so that 197.2% Arcane Damage will change to 197.2% Fire Damage for the barrages that became fire and 197.2% Shock Damage for those barrages that turn into shock? Wow honestly that is really weird haha, so the other Element % Damage on other items can be like Poison/Fire/Ice/Shock like your Apex of Epiphany of Haste hat or does it have to be Arcane in order for it to change % ED affixes on the items?
http://forums.dungeon-quest.com/uploads/default/original/2X/2/2392a1e3efa9a390836750fe9df84ce18702fc29.png

So it does not change? Which means that all the other elements(other than Arcane) will not benefit from the 197.2% ED% damage affix from your Eternal Arcanist Wand of haste?

I am getting more confused heh, so this is a yes/no question, will it affect the other elements then?

From what you answered previous your 197.2% ED% damage will affect ALL elements’ damage, so your answer is yes right? Just wanted to confirm some mechanics so i can finally create a build one day!