PvP? How to get aimed shots?

PvP does not do aimed shots like Dungeon Crawling does. At least not so I can tell. I’d win more Arena matches, if I could some how train my Flintlocks on my opponents. Rogue seems to be pretty useless in the Arena. Most people are using Magicians and I can’t hit the broad side of a barn in there.

Chakram proc rogues? I know there are hybrid class Rogues such as the type of rogue I use and other known rogues . Battlemage I guess counts as hybrid rogue.

Although Blinkstrike has done some comeback to some player.

It seems like for all classes, it’s hybrid build that can survive well and damage . By hybrid, I mean using other class support/skills as the main help and not pure rogue skill or wizard skill or warrior skill such as Aftermath Build , Bow build and say Knightscharge build much (although some Knightscharge build rising up which is good).

Main focus is about the damage , HP and reduction .

I found this old thing, floating around a lvl 44 Mythic Dungeon. I polished it up a bit, my best build yet. Cuts through even the toughest enemies as if like butter. 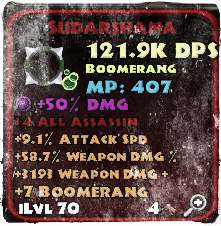 That is a pretty rare item for starter players! Nc job finding one keep it up! Also once you get lots of crystals and mythstones dont forget to upgrade that.

Yes, I thought so. But after using it in the dungeon I realized that cutting blades don’t work very well against certain monsters. Especially the slime. Storm proc and crushing weapons are better, so I stuck with my lucky pistols in the end. They clear a room rather nicely, and have a good Fortune bonus foe Dungeon Crawling. I’m building a rogue archer for the Arena, withed its aimed shot it’s sure to get a few wins there.

Nice! Keep it up. Also don’t strive for a few wins strive for eternal league!! Hehehe also for beginners use ignore resist on ur items it will help a lot. It can be found in ruby or by certain items. Weaken would be great also just dont put both of them as ignore resist will cancel out the effect of weaken anyways. Happy playing!!