Yes this is a question i wonder myself, also with specialist, how does that work “if” it work on whirlwind. Same with storm that im using, if i crank up cooldown, the last storm turn invisible (or get deleted alltogether), does that mean your original storm gets deleted? Same with whirlwind, does original whirlwind get deleted?

Attack Speed is mostly used for MH Primary Skill. like Comet, Smash, or Ricochet. all other Skills use Cool Down.

Theorycraft has some good rules of thumb & ideas, but is pretty outdated. there have been many updates since then, and many improvements for improving damage and defense.

some Skills, like Storm, can only be cast one at a time, and if their Cool Down isn’t done, disappear when get cast again. I haven’t tested it yet, but affixes like Mirrorcast & Specialist, and the Elements Set, should let you cast multiples of these Spells. these 3 have a 1 second delay to cast your Skill again.

Storm has a 7 second CD (I think), but lasts for 5 seconds. having a lower CD means that if you need to move and cast Storm again, you can… you just lose the Storm that is already in use.

Whirlwind lasts 1 second with a 1 second CD. CD means you can use it with a faster CD, and putting Skill Points into it will cause more damage and a higher Attack Frequency. it starts with 4 attacks a second and goes up to 8 attacks a second.

I haven’t tested it yet, but affixes like Mirrorcast & Specialist, and the Elements Set, should let you cast multiples of these Spells. these 3 have a 1 second delay to cast your Skill again.

Damn so 25% specialist gotta be a MASSIVE damage increase then vs hard enemies (505 m3 and climbing) in my noob storm build :0

one reason I never tested was I like Twister so much. at Twister 40 with Cool Down +60%, I can cast Twister every 1.2 seconds and Twister lasts 5 seconds, so enemies are getting hit by up to 5 Twisters if I have enough Magnify and/or +2 yard AoE, at 5.6 attacks a second per Twister. plus using +50% Twister Proc… lots of damage. plus, it was Twister Taunt vs. Storm Knockback. and yes, you get lots of DPS with Storm! I used Storm with +300% Frostbiting for awhile, very nice damage. used Warrior Taunt to get enemies into Storm Range.

one thing I really wanted to try was Storm with Strom Proc. that should be 2 Storms at the same time, if you had Strom Proc +100%. that would be 16 attacks a second for 5 seconds, very worth having 4 spaces for +100% Storm Proc. Proc doesn’t have the 1 second wait that Specialist or Mirrorcast have. also, from what I can see, the 1 Proc a second no longer applies, it as all based on Cool Down now, same as the Spell it is based on. I plan on doing some comprehensive tests as soon as I can, as I have a lot of questions to find about Procs for Builds I have in mind.

also, from what I can see, the 1 Proc a second no longer applies, it as all based on Cool Down now

one thing I really wanted to try was Storm with Strom Proc. that should be 2 Storms at the same time, if you had Strom Proc +100%

nooooo! did you test it with Prismatic or Ascendant to see if you have 2 different Storms? I can’t remember if I tested that way back in my Noob Days. if you did, then that will save me testing myself. ahh, but you tested with Elements Set… so sad for me. good job with the MirrorImage Proc test.

when I was testing Twister with Twister Proc, it was pretty cool seeing Dual Double Element Twisters with Prismatic.

So do you get one storm for each of the mirror images, you could have 5 storms going at once

wow, that would make Mirror Image a game changer for builds using Storm. probably want to put Mirror Image +10 on the Pet for longer lasting Images (I think) and extra damage.

Yes, I’ve test it so many times coz my climbing build revolves around procs.

when I was testing Twister with Twister Proc, it was pretty cool seeing Dual Double Element Twisters with Prismatic.

Yes,it pretty nice to see different elements on your screen.

This is the sets I used for climbing. 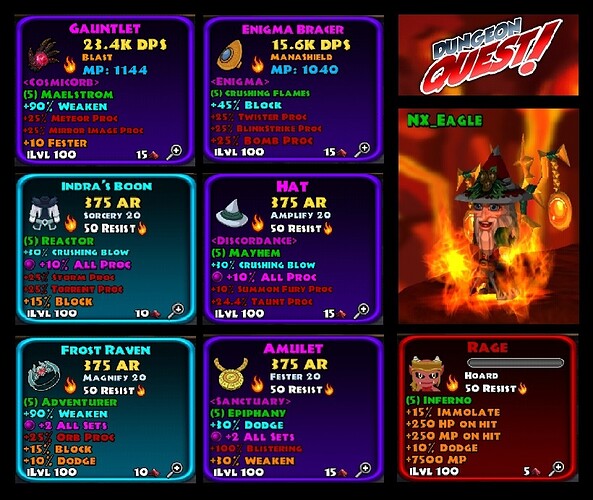 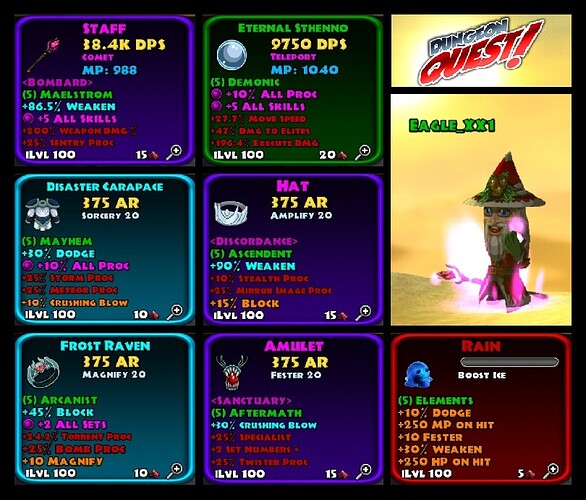 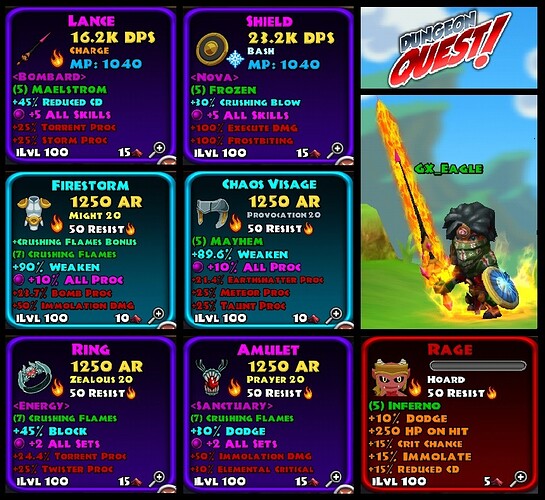 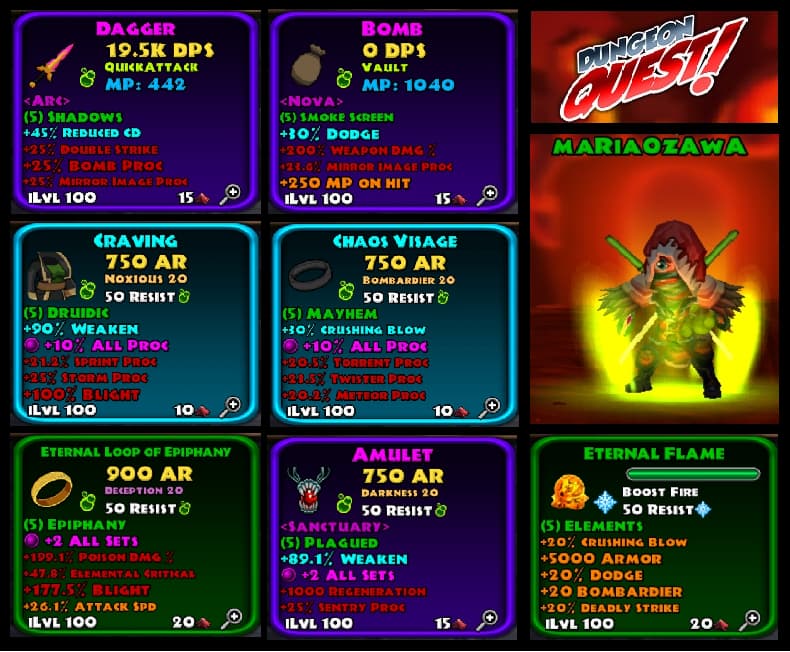 is the Super Proc Aftermath Wizard doing good (Eagle_XX1)? there was a new player asking about his own Aftermath Build and had questions, and I haven’t really done anything with that Set myself, so I don’t know much.

Hello I switched from warrior to wizard and following the aftermath build (just switched yesterday night…currently lvl 42) Im wondering if theorycraft is super (SUPER) outdated maybe the aftermath build too. I got all the sets, got some ultra rare crystals 2 obsidians,1 amethyst ,3 rubies (from making eternal items and converting them for 500k— A POP! than buying for 5,434,000 in the shop, cause Im a newbie need money) I want some tips especially from veteran players like Mr. Golem who comment…

It still doing good up to 1k floor, but its not effective at 2k floors up so I just used it as a hireling. Even with Demonic set and execute dmg it will take it some time to kill epic enemies and cartographers so I use CF Mayhem build(NX_EAGLE) as my main toon.