Sanctuary in the Battle Arena

Is this a joke? Not only do you give the player a free revive, but they’re also damage immune and have all imparting abilities negated for a couple seconds. This is by far the worst PvP implementation I have ever seen.

I shouldn’t have to kill a player twice in a match that only lasts 30 seconds. Fix it

Look dude, sanctuary only regains a too much bit percentage of hp when a players hp reaches zero. So there is no big deal to worry about.
I do understand what you are feeling right now but this game is quite unique from all other rpg -pvp games so deal with it.
and one thing, If you still encountering such problems like that, try to make a balanced build with enough hp/resource and some damage.

You can use sanctuary yourself and in higher leagues most people use empyrean.

You clearly don’t understand what was said. You’re completely immune to any damage or movement negating affects for a good two seconds.

These are 30 second matches. Giving the player the ability to not only revive, but be completely immune for 7% of the match is an absolute joke. And topped with regen, you’re at full health almost immediately.

The using it myself argument is invalid. It’s incredibly imbalanced and belongs nowhere near PvP. This is not “unique”, but moronic.

Actually sanctuary isn’t a big issue. It’s been so used and mostly balanced for so long now that it’s not so much an issue if you’re good enough at PvP and know what to do. There was even one glitch at some point in time which removed sanctuary if the AI blinked so fast so you were insta killed too. The sanctuary itself on gear wouldn’t be removed but the glitch made it so the opponent can insta kill as sanctuary wasn’t counted. Ii do get why you sometimes don’t like sanctuary though. It is almost a must have though tbh.

If you’re more skillful at PvP and less likely to die, empyrean for overpowered dmg ( I might start using it if I find myself winning without much death). So darn useful as attack but as AI , sanctuary ftw usually. Anyways since sanctuary makes opponent at 10% hp which can be very vulnerable, you can easily destroy them with enough DPS and win usually.

I dont see any problem with sanctuary lol. Almost all top players use it. Its the first this happen that someone dislike sanctuary implementation in pvp.
Just use it urself since its the most basic must have on pvp if u want to rank up

Maybe he encountered some ai’s with low hp but got some h’ of a regen. Well that’s normal and understandable.

Its like hating the insignia in wow because it removes cc.

Not even remotely comparable. Clearly you don’t PvP in anything mention worthy

Dude I will lend you some kickstarter pvp build to remove your sorrow,

I am indifferent on sanctuary. I do see your point of view though.

Please remember they designed battle arena approximately two years after the initial release of Dungeon Quest. Sanctuary mythic was intended to assist in your quest to climb floors and not lose so much gold (Revive cost vs sanctuary every 30sec). 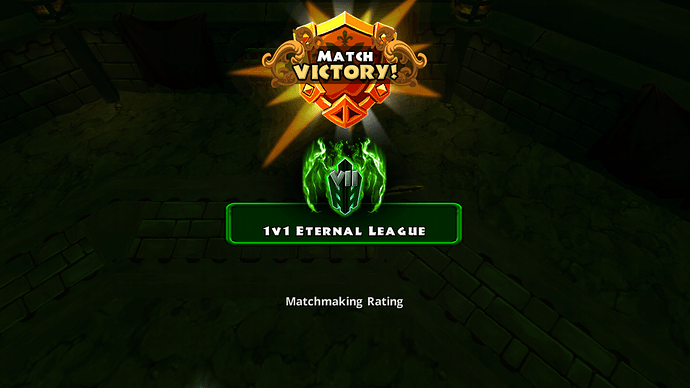 My skill is hardly the issue. I’ve been playing for less than 2 weeks.

Side note - literally just hit this 30 seconds ago lol

Dont get me wrong, I absolutely love the idea of it for PvM. For such small arena maps and time limits, it just isn’t suiting for PvP.

I definitely see your point of view. Some players I faced have had 1M+ HP and when sanctuary finally kicks in that is an additional 100k HP to beat down plus any Regen in a total of 30 seconds. Thankfully the devs increase power by 25% for each draw.

If sanctuary affix was gone in arena today, I would adjust accordingly.

If you played the patch where LOHKO builds easily dominated the arena you would be so thankful we have Sanctuary. If you get to Div 1 and play against players with 20K bleed dmg you’ll be thankful there’s Sanctuary…and those annoying OP earthquake stuns.

I get your point about immune and negating abilities but it only becomes an advantage if one player doesnt have sanctuary.

Sanctuary gives you a better winning chance against ridiculous strong opponent that you wont even have a chance against even without sanctuary. This might not be the case at lower division, but definetly the case in Division 1

One should not confuse one games implementation for the correct implementation every game will do things differently and different things will work for them. Sanctuary has been rebalanced for arena and it’s existence is a necessity for healthy PvP with in DQ the affix is in no way a requirement and is usually a wasted affix but it exists to allow greater arena diversity and it stops a variety of builds that would be problems from being ones as well as allowing other builds that could never work to function. Sanctuary is more of a safe guard and noob trap with situational usefulness rather then anything else

I hardly evrn notice it weather its !e or the other guyusing it. Just breath on you after it goes off and your dead. Against me there’s so much crap on the ground its almost a wasted affix slot. Now CV on the other hand is terrible I say get that crap out of here. Vanish can be strong but enigma is so much more fun!