I don’t know what is better. Actually I am using sorcery (40). If I change sorcery to focus I lose a lot of damage. If I use both the damage is the same. How does focus work? It looks not very useful for me…

do you use poisson?

Focus increase your Weapon DMG. this would be better for Arcane, Shock, & Ice Weapons.

Sorcery increases the DMG of your Elements DoT. this would be better for Fire & Poison Weapons.

if you use Focus instead of Sorcery for a Fire or Poison Build, you lose half the possible DMG you could do. lets see, what would the math look like?..

sorry, it looks like I went a little crazy…

I am using ice dmg, but if I change sorcery to focus I am loosing 50% of dmg…

If DoT is useless, does it means amplify is useless too? (twister, ice dmg)

@Necus describe your build item by item then we can help. Sorcery increases element damage which is useful provided your gear is element based ( e.g. Element critical (ice) ,frostbiting and 5000 ice damage and % ice damage ). Focus just increases any weapon damage affixes on your build. 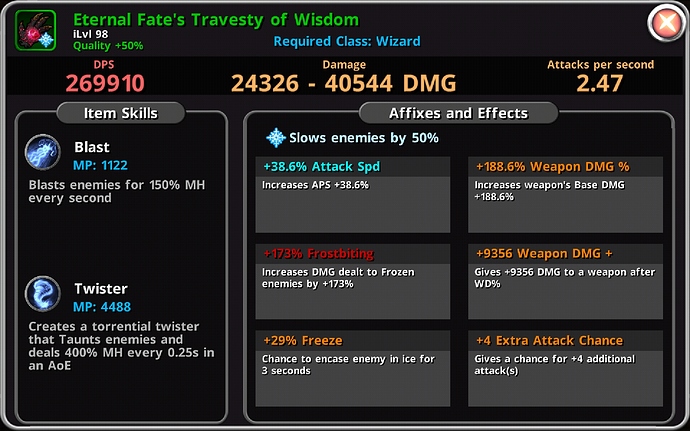 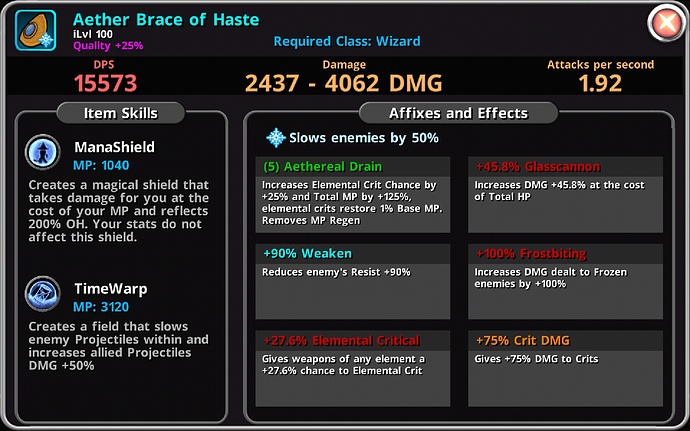 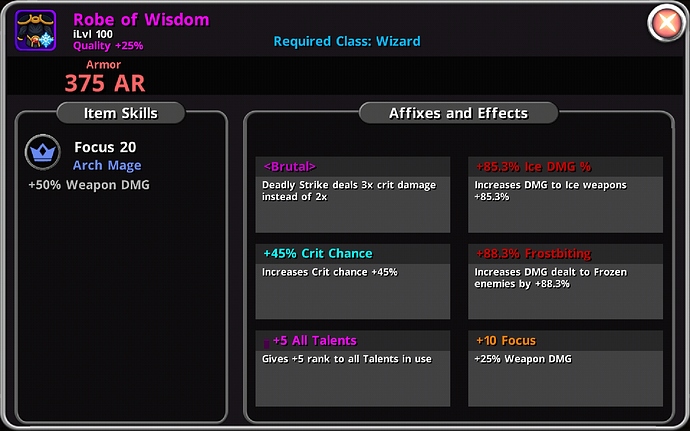 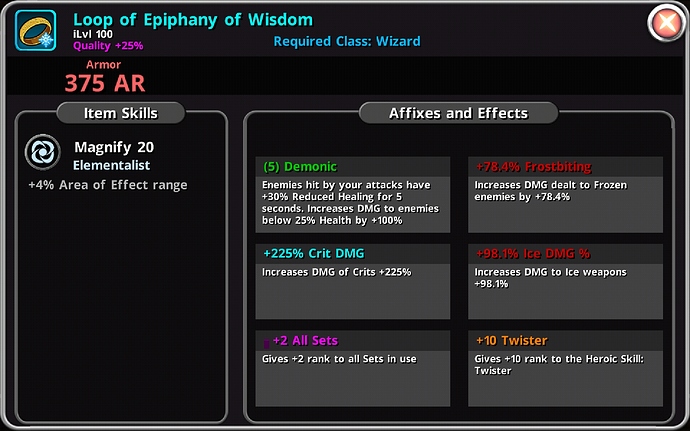 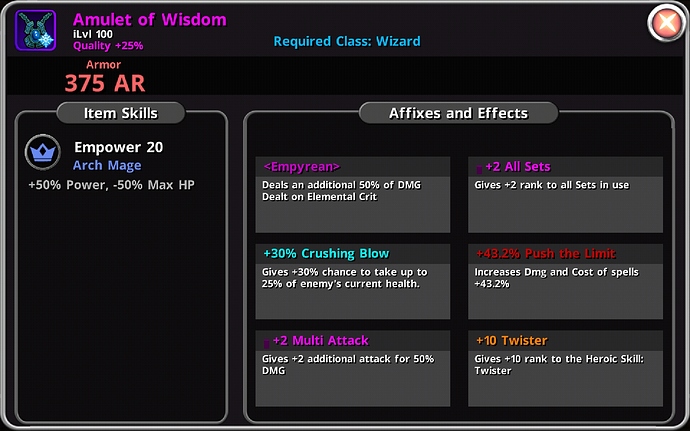 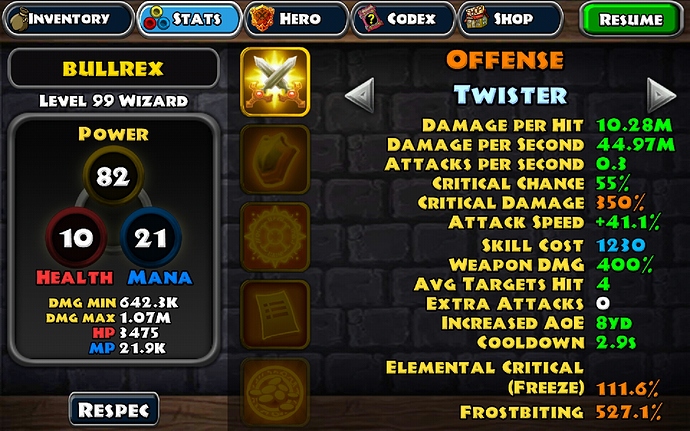 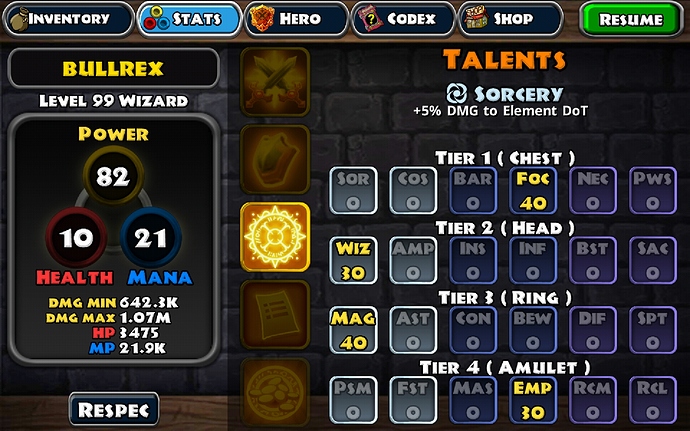 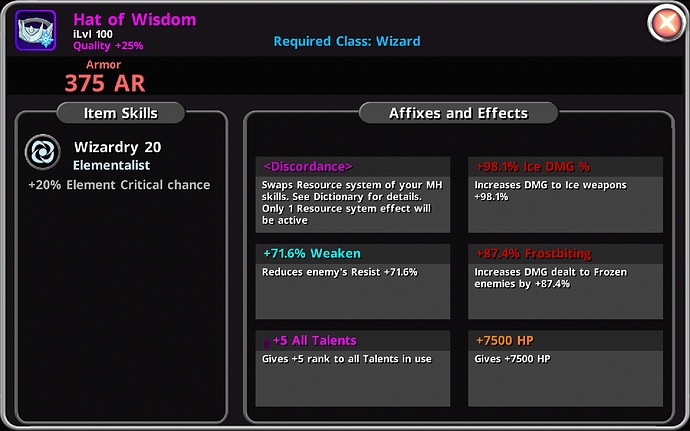 It is’nt done yet, but I try my best

looking at your off hand weapon… Change your main hand weapon to a wand for barrage skill to start with. Put cosmic power on armour as a set affix then read @Mr_Scooty anti immortal build reveal in guides.

in the Codex > Dictionary > Terms > DoT: Damage/Debuff over time. Poison, Fire, Shock, Ice, and Ascendant all cause DoT’s on enemies.

Sorcery should affect Shock. I plan on testing this later today, since now I really want to know. I guess now that I am crazy enough, I guess I should test Ice with Frostbitten and Ascendant & Arcanist Set and see if Sorcery works on these also.

Amplify: +2% DMG per Rank for each Element DoT on Enemy. Amplify 20 with a 1 Element Build gives +40% DMG while the DoT is on the Enemy. with 2 different Elements on MH & OH, +80% DMG to enemies with 2 DoT’s on them. if you are using Prismatic Talent or Ascendant Set, you could have up to 4 or 5 DoT’s on any enemy for +160% to +200% DMG!!! the problem is that DoT’s don’t all last the same amount of time. Fire is shortest with 2 seconds, and Poison is longest with 8 seconds. Wizard Talent Fester increases the length of time DoT’s last, and Inferno Bonus increases DoT duration also. so some Weapon Skills will work better than others at putting multiple Element DoT’s on enemies in a short amount of time.

I remember in my early days Ascending my Wizard testing Focus vs Sorcery. it has been a long time, so I need to test them again in addition to the other tests. going to be a long night, or a few days…

a reply to my reply…

I did a little testing with Focus vs. Amplify. even using only one Element, Amplify was better. I did notice after testing I had Legend ED% on my MH, and never tested with WD%, so that might have to come next.

testing was with the Battle Arena Test Dummy, since I was having problems and zero patience testing on Campaign monsters. since it is hard to get the same Test Dummy opponent when changing Equipment, it is possible my numbers are off a little due to different Dummy’s having different affixes on their Equipment.