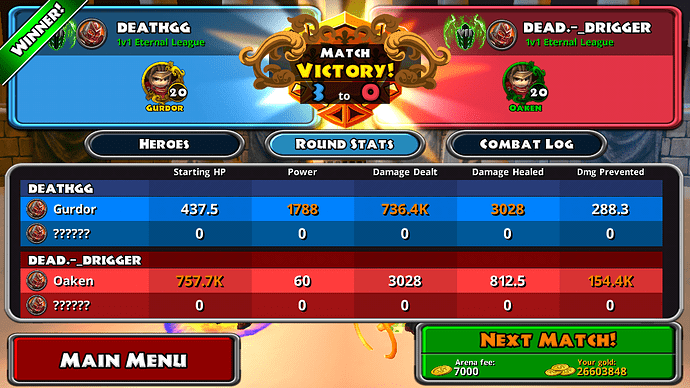 And i think the power count bugged because my original power is only 1144 but there it showed 1788 dont know what the heck happened.

You probably drawed him so many times. Power increases by 15% every draw you do against a player. This system is supposed to be there to prevent a stalemate.

Pretty hard considering its very hard to dodge every torrent and attack. Obviously Sanctuary can help though. Congratulations though XD.

Still I think being able to survive on 25k to 37k hp and winning is also amazing since I almost always win with Sanctuary protecting me. It’s very hard to dodge everything no matter how fast the reflexes.

I got 1 draw does that count?
And also he wasnt able to kill me because he only has 60 power lmao hahah

You are the highest power warrior !

Really? Lol i got that power because of 1 draw tho hahha

Way more than one draw lol. But the fact that you have such a low HP means a lot of Glasscannon and other means of getting very high damage , even for a warrior.

Each draw increases power by 25%

I thought it was 15%. But 25% might make more sense as power does increase fast.

Yes I have calculated the exact values. It is 25% for certain.

I am fairly certain that it was only 1 draw

Ah so your DeathGG hehehehe

i beat you only once cuz i just use vault keep jumping till it spawn an twister proc an orb with living force and reactor. hehehe