The wording on the green set affix Epiphany is all wrong,but its worded fine in the codex so dont do grugs

Can you explain more what you mean? Because as far as i know, epiphany is working fine… 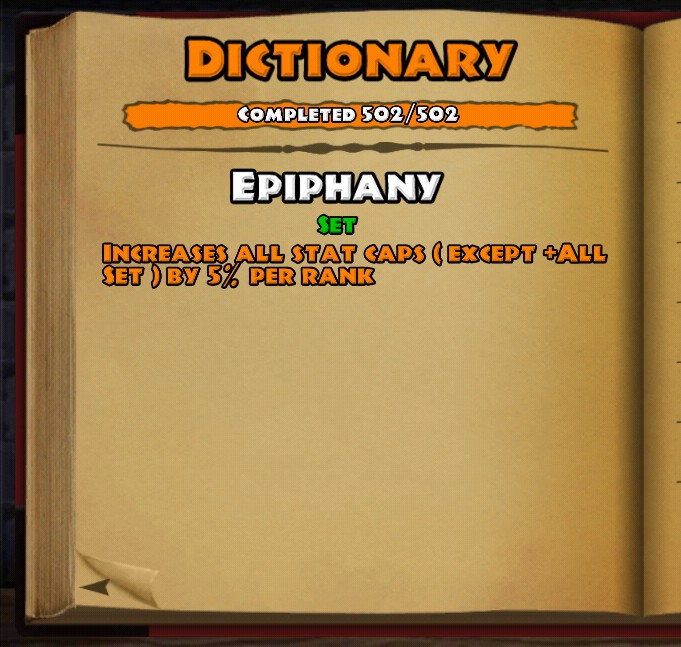 The green text is worded wrongly and it tricked me i dont want any refound but @ 8 set bonus its worded as +40% so i touth i can have 100% dodge.

That is why the “Dictionary” option there…try to refer to the dictionary first…if it still confuse you, then try looking for explanation here in the forum…if there is none, then post here to ask other players and admins…

If that’s the case, then you should ask here in the forum,that’s what i always do when i’m experimenting with some build,I always ask first to make sure about everything before I proceed to the actual build making…

im to lazy to spell check on my phone so sry for grammer in advance.

This game haves bilion download’s do you think everyone comes here and poost a questions? Before 1 mounth i didnt even used the forums and i played it for two years.

After i used the forums i realised how stuff actauly work this game dosnt word really important stuff like elemental stacking i remember my 1st “build” used posion fire and bleed cause i touth they stack and i did x3 dot dmg that was way in the days and ofc you cant stack fire and poison dot. Thats just one of the examples.

Dose the game think its fun to ask one quests and whait two tree h’s for someone to anser it + the cance on a non legit anser is there, and in the end of the day i have to make a question poost every 10-20 min so thats just absurd.

Im a huge dungeon type game’s ive play all the diablo’s for years and i’m supper into path of exile atm so i really like this game but god forbids they let us know how the game works.

You are right, in some cases it would be good if it said “increase by x%” but in other cases it would be wrong. It is advisable to always do small scale tests without investing a lot of crystals first. You can regard the “+x%” to follow 1 in a multiplier.

If you have more of the same affix source they are additive:

Since Dodge Cap and the Cap increase from Epiphany are different “affixes”, they are multiplicative. A case to case differentiation is sometimes needed. For example:

If you don’t know how some affix combination behaves, you’ll have to simply test it; you’ll get a feeling for it after a while. I still sometimes test certain combinations.

Some stuff’s are untestable or take alot of time to test it correctly like get a full grey set and jsut add the stats you want to test but still who wants to invest so much time and resorses in that.

I have a crusting flame/electocution rouge i use fire on my bow and lightning on my mirror imgs some ppl tell me lightning and fire stack dont stack some tell me they do at the end of the day i didnt want to waste alot of resorses to test it but i did and i still dont know since the dmg difrence is to much and the combat log dosnt help.

The other option is to ask here before you invest any crystals ;).

soo dose crushing flames/electocution stack ? like can i have all the lightning stacks +immo on one target ?

Yes you can, but that also means you have to deal shock and fire damage and Electrocution will only kick in if the enemy is below 25% HP.

Electrocution is there to deal high damage at low HP, where CB with Crushing Flames doesn’t deal much damage any more.

Immolation is fire ECrit, but shock stack is applied by normal shock damage.

They should work great together, that’s what they are intended for.

Ye my bow deals fire and my mirror img do lightning but someone on the forums told me they dont stack when i made a post and thats why the forums arnt 100% legit i was about to change my rouge build that aperantly worked fine.