I was thinking maybe putting certain set affixes like health or damage % boost on real cash vanity items.I’m sure there could be more. But this was just a quick run through of a idea.

Sort of becomes P2W then, doesn’t it? I like it, but not all people will pay for things in game. P2W has always irked me. Nice idea, though.
-1 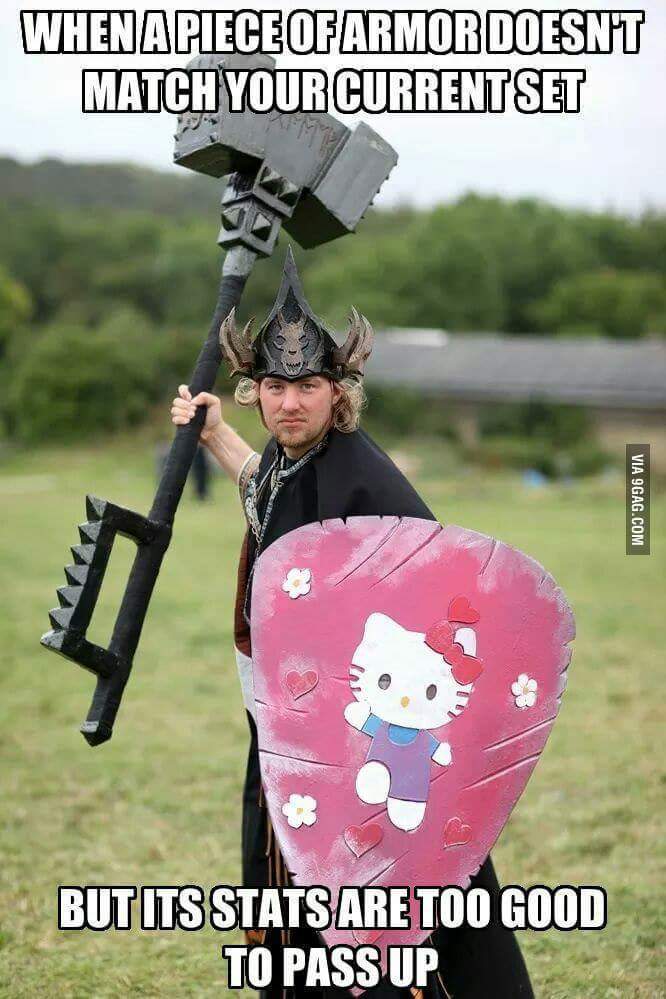 If this picture does not explain my point well, I don’t know what else will.

that sheild is EPIC. lol

Well you pay for slots. To get hirelings. If not then you play alone. An that is a damage boost as well as luck An gold. Also you pay for boost to gain a advantage in getting gold, item rareity etc. An the vanity affixes doesn’t have to be in arena per say. I mean if I paid 9.99 bux for the night blade pack or what ever it should at least have some sort of advantage then just to look cool. That’s just my opinion.

Nightblade advantage, imo its cool and ITS COOL, When u buy, u pay, its full set of vanity armor, shoulder and weapon (not only 1 part). and it permanant not like boost.

*Just asking what advantage u want from wing if u buy it.? u want your toon can fly.? lol just kidding.

Also you pay for boost to gain a advantage in getting gold, item rareity etc.

Boost is time base.
And anything you get while boosted the players that doesn’t boost can also get it but with more time/luck.

Well as I am observing they don’t have a pay system that gets a user benefits that is too much that a free user can’t catch up.

I do support the DQ team. I have 6 slots and the premium stash. I really like storage lol.
Premium stash is very nice as well.

I play dota 2 and it has a similar system that cosmetics has high value and getting cosmetics doesn’t give any advantage to the one that uses it.

This will never happened in DQ.

I have bought all slots an everything except Angel an demon vanity packs. Seems to much for so little. An I bought the nightblade pack as well. But as a newbie who doesn’t play 12hrs a day or spend lots of time on playing since I gotta work an take care of kids. I my self wouldn’t mind paying extra for stuff long as it is benefits me in game. I don’t play arena that much maybe once or twice in the last month or so. I liked it at first but it got boring real quickly. It’s not really all that fun to me. Mayne cuz I don’t got the time to build gears or farm a lot. I really love the campaign An wished they could have added more there then a arena. But that’s just my opinion.

They also said that it would only be offline play. But there is a arena that u have to be online to play. I understand that it May never happen but Hell it’s a idea. Bet this game started as a idea. An grew from there.

Now, back to topic!

This would turn DQ into a pay-to-win game
-1

Ok let’s just nerf long time players an pple who plays DQ most of the day. Now that seems unfair for pple who wants to enjoy the game without having to spend time which I don’t have. For me to keep up I would have to quit my job an jump on warfare an spend my days grinding away just to catch up. Sry @Rafia. But some pple do have lives outside of DQ But still want to play an keep up with long time players an all day grinders.

How would it turn it to pay to win? I mean least it’s legal then most of the hackers that hack to win. I’ll be supporting devs. An still get the benefit of keeping up. Like I said before it won’t be in arena. An if u don’t want to buy it then don’t. Just like slots an boost. They are there if u want to buy them. But not needed.

How bout it being a gold an luck boost affix instead… Or health isn’t a bad idea to help use newbies to get a little farther.

Let take it this way, when you equip Nightblade skin, you’ll get 50% Element DMG boost.
The people who purchased the skin would be happy, but what about people who don’t? They’ll think that it’s not fair for them because bla bla bla. Then they’ll think that they have to invest money to get themselves more powerful. Then DQ is now a pay-to-win game

I agree. But the same thing goes with slots an hirelings. Pple complain about not having another free slot. So when one can buy slots an others can’t. Does that make it a pay to win?

Save slots is another story, even with one slot, you can access pretty much everything except for the hireling and 2vs2 Arena.

The devs need to make there living as well, and $0.99 is a reasonable price IMHO.

PS: Don’t worry, new features is on the way and it does not require IAPs

I’m. A newbie cuz I use to play long before any Crystal or mythstone was involved. I use to envy players who had an extra slot an a fee of 99 cents for 10 hireling scrolls. But I didn’t complain I just enjoyed playing until I could afford the slots an everything. But that char is long gone an I started over. But until I started going to the forum An realize that pple played this hardcore. Don’t get me wrong I would love to craft a good gear. But the rate I’m going it’s gonna take a few months. But hey I’m glad I got a great game to play when I do have time.