What did you find while boosted?

well, I found more monsters, and ended up with a gold boost 10 minuets into using the boosts. I didn’t find any cool pets, and I am already finding more Legends and Eternals with the gear I have now, but think I got some better crystals and myth stones dropping while the boosts were active.

lol, not really. I got that just because I’ve used an eternal map

I’m keeping my boosts in messages. I think its possible to save some for a while.

yea, they stay in there. how long, i dont know

A LONG TIME. I remember cronos kept them there ages and some other person but they may have either used or not used. I’ve done it for quite some time as well sometimes. I mean unless there’s a page limit to messages.

Legend has it that they still haven’t opened their messages.

I got a double legend pet drop! Both useless to me. One was a double (sera) and the last 10/12 pet’s i’ve found have been slimes although this one was new. 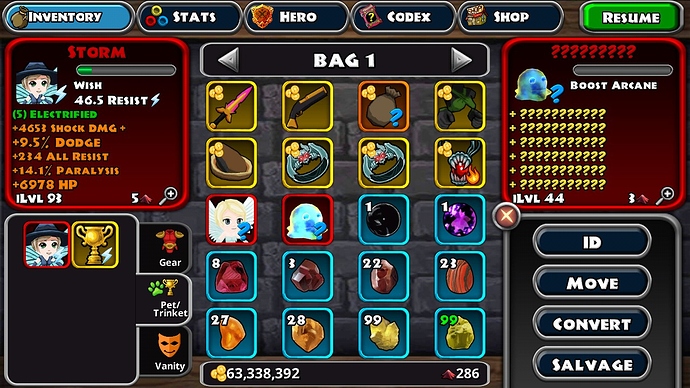 I dropped some crystalline set items and masochists set

nice. I am hoping for a Sera for a build I am thinking of. nice Double Legend Pet Drop.

Still waiting to find Lilith or Stitch. I’ve been playing a while and I am yet to see an eternal pet. I’ve found around 30 legends in total. I got 3 cerberus in a row I was so annoyed I deleted them all. Of the 30 pets i’ve found at least 15 were slimes. I thought they were rarer than regular pets. Hmmm…

slimes are actually common mostly because of the 27 or so pets in the game… almost half of them are slimes (11 i think.?)

its really annoying because they all have the same set affix, making it that much harder to get the rest.

I think there are 4 different sets on the slimes, Elemental, Bad Skill, Demonic, and Angelic. plus they all give a 10% boost to a certain element with a 100 element resist to the same element. these don’t change, even if you change the element of the slime. so if you find Leaf, which I think is poison, and you change Leafs element to fire, any element affixes would be fire, but the 10% boost to poison damage and 100 poison resist is still there.
also, thank you to the Dev’s for the cool boosts. it was fun farming with them.

bad skill is a myth… what it does… what it means… shrug… ask the bss society. the rest have elements. 9 of them. but yea… bad skill. hehe.

edit : its possible its just referencing the resists it gives you.? i noticed the arcane boost slimes do not have resists.

wait, you know it is the BSSS, and we don’t really understand either. (mostly a joke now) I know Bad Skill are the Arena affixes on the Trinkets. I wonder if the slimes with Bad Skill have Arena affixes instead, and if they stack with the Trinket affixes. and if I am wrong here, well, that is why BSSS was founded.

@ObiWanKenobi edit: no, because in the Codex the damage boost/resists have a different name. that is why I was wondering what it was all about.