I was using Teleport, Storm, Taunt, and Comet. but I only used Comet when my Storm or Taunt slowed him down. 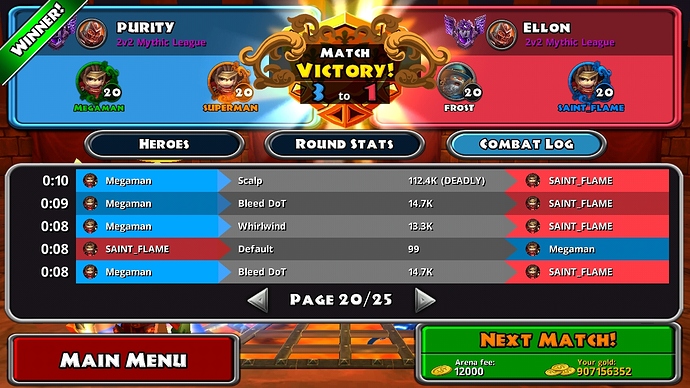 I’m finding ways to kill them.

Took me quite a few rounds of drawing; meaning +25% dmg to both players until one player can successfully kill one another 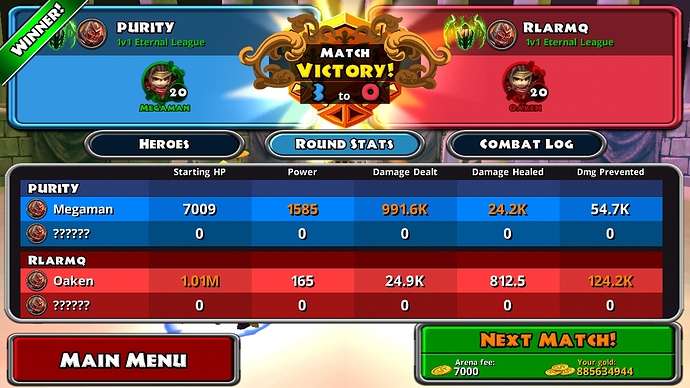 I’m actually quite proud of myself

Playing around with my pvp build lol

I know, took me about 10 rounds total, but I don’t have as many HP as he did, so around round 5, I started to worry about that +25% thing, I was hopping around a lot more that usual, which caused me to not keep him under my Storm as much as I wanted.

1m hp is nightmare in division 5 and 6 ready to forfeit i cant kill them in 30secs.

You don’t need to kill it, you just need to draw.

every round, the damage you do goes up 25%, so eventually you can kill them. but that goes the same for them. that 1.01 million HP guy had low damage, but it keeps going up 25% every round, so eventually, he could 1-2 shot me if I don’t do enough damage to him and don’t dodge/block/heal enough. in my battle with him, my first 3 rounds were draws, and it took 7 more rounds to get 3 wins. I had low HP, and in the later rounds, I was getting worried about the damage increase and losing to some lucky hits from him.

Question: does the damage go up 25% every round, or only on rounds after a draw?

After each draw - damage increases 25%

i have kill this guy is season 3, in the
beginning of it, i waz in eternal league and he waz in mythic league, of corse that i have is build screen shot

, and alot guys to that are corentetly in div 1 and 2 of eternal league, dont worry guys, your build’s is just to full my memory card whid someting don’t worry

thanks @Mr_Scooty that helps a lot. that explains why the damage doesn’t go up when there isn’t a draw. I was wondering about that. I don’t get draws very often, but if I keep moving up in Eternal League, I will probably see it more often.

@Mr_Scooty I love the spaghetti western clip. My favourite is the final from "A few dollars more. "

No. The best badass scene is the end of the good, the bad and the ugly. Please, someone, post a link. And links to the end scenes of unforgiven and for a few dollars more

and the final gun fight scene from once upon a time in the west.

Most of my favorite scenes are in those movies.

The Good, The Bad and The ugly

High Plains Drifter One of my favorites - too many scenes to list.

Pale Rider Another of my favorites

Thanks for sharing @Mr_Scooty. For a few dollars more is my favourite especially the dark humour in the last 2 minutes that follow the clip you have posted. Josey Wales is awesome. Love the supernatural element to high plains drifter ( which he remade into pale rider). I love the last fight scene of Unforgiven. It was an hybrid of silence of the lambs and the spaghetti westerns by Sergio Leone that made Eastwood famous . He directed it as an apology but then dedicated it to Sergio Leone.

Hahaha I’ve met that 1M hp char too before his tough, but the chars with high damage reduction is more annoying for me, even though they have only like 30 or 20k hp their damage reduction reaches hundreds of thousands and sometimes millions LOL.