A Guide to Building

Foreword
After deciding to undertake yet another PvE build for my rogue, I figured that it would be helpful to make a guide to streamline the process for myself in the future. It took me a while to mentally grasp how to construct a build in such a way as to maximize each item, so I thought this short guide might also prove useful for newer players wondering where to start. Enjoy

Step 1: What’re your goals?
The first step in the building process for your character is to choose your build goals. Obviously, a PvP build will look much different from a PvE build, so that should be your starting point.
Additionally, consider what you want to accomplish with your build. Maybe you want to zoom through floors as quickly as possible, max out your farming stats, do tons of damage, mess around with some fun skills, or, most likely, a combination of these things.

Step 2: Decide how you’re gonna kill stuff
The second step to any build is to choose the primary MH and OH skill(s) that your character will be using to kill stuff. Every MH and OH weapon has two skills, 1 primary and 1 special, so choose the one or ones that interest you most. Keep in mind that Amber crystals can be used to alter the special skill of any weapon (including giving you access to other class’s special skills) so narrow down your weapon choice by its main skill or by a unique stat that it has rather than by its special skill (see Step 3).

Step 3: Narrow down your item choices
As a forewarning, this is the longest and most crucial step in the build process. However, once you’ve completed step 2 and made your weapon choice, you’ve already gotten a headstart.

From here on I’ll be referencing the build I’m currently working on for the sake of simplicity. I want a rogue build that can farm levels quickly using a Flintlock for the Ricochet skill. So I will begin looking for the best flintlock that the game can offer me to this end.

In order to begin narrowing down my first item I need to know which sets and affixes can and cannot be crafted (via crystals) in the game. A list of craftable affixes can be can be found in this forum and on the wiki page. Note that all Epic affixes can be crafted. What matters is an item’s Set affix (green) and the Ruby affixes (red), because not all of them are craftable and thus must be found pre-attached to a Legendary item. This is the foundational principle to maxing any build.

Once I know which sets and ruby affixes are uncraftable then I can begin looking through the in-game Codex in the LegendEx section for a flintlock with an uncraftable affix that I need to use as my base weapon. Keep in mind that items can be converted to other classes by using a Jasper crystal. So I know that I’m looking for a flintlock, but now I also need to know which other MH weapons from the two other classes can be converted into a flintlock, since another class’s weapon might contain the unique affix that I need most. 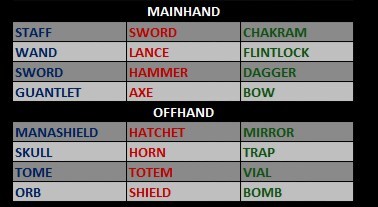 So I now see that a mage’s wand and a warrior’s lance both convert into a rogue flintlock. Now I can go back to the LegendEx section of the Codex and look for the best possible flintlock/wand/lance for my character. After searching I see that a flintlock called Mutiny has a really good and uncraftable set affix that I’d like to have in my build called Defiant. So now I need to go look in the game for a Mutiny. This process is then repeated for every other item in my build. Now you can see why this part can take so long. Luckily I’ve already farmed a few Mutiny flintlocks and stored them on another character.

Step 4: Crystallize
Now that I have my legendary (in this case a Mutiny), I need to begin modifying it. Unless you’re turning the item into a Mythic, the first modification you’ll want to make is to use an Obsidian on it to roll a Crystal affix. Crystal affixes are not removable once on an item that’s why it’s usually done first. If I don’t roll an affix that is useful for my farming build then I will need to go and find another Mutiny and try again. After I roll the crystal affix that I need then I will start using other crystals to get the set and ruby affixes that I desire for the item. Once I’ve crafted all the affixes that I want then I’ll use Fluorites and Diamonds to re-roll the stats of the affixes to be as high as possible. Lastly I’ll use Citrines to roll the Nature that I want (note that MH and OH don’t have natures).

That’s it! Rinse and repeat this process for each individual item and make sure to reference other guides in this forum for help, there’s more to learn that will aid you in building the next champion DQ’er. I’ll post some helpful links below. Through trial and error you’ll eventually find out what adds value to your build and what doesn’t, until you’re left with the final product.

I’ve been grinding for 2 hours and i still cant get an item that has a Mayhem,Eternalized set …Need help…

not the gray affixes. you should look for aether wrap. nadroji robe is kinda just for farming now.

@JesusSaves life in africa is hard? I really hate the heat though

@roykiyoy it’s blistering hot. Today must’ve been close to a hundred degrees. I get a bit of wind from the Indian Ocean though which makes it much more bearable. Well that and DQ of course. But I do love it here

well im sure goodthings will come for u soon

heat is life I love to play under the sun

What are your goals*