Hello fellow non cheaters.
I just started playing yesterday, invested a bit more than a noob should have but have had lots of fun.
This morning, a cousin of mine showed up and he had cheated using some programs and had everything in max amounts. He spent an hour laughing about what a sucker I was for spending money on a game I didn’t need to spend a dime on.
He also meantioned that if I didn’t invest 1000.00 USD if never catch up on the game and even then might not.
What’s being done about cheaters? I am starting to regret my purchase when all I need to do is hit a few buttons…
I’m not finding legendaries, I’m barely making progress, and he just hits a few buttons and it’s game over, he wins.
Tell me there is some way to stop this mess.
Justin

There is no “win” in this game, there’s only having fun. If you’re having fun making the progress you have (and you just started - it’ll get better fast) then it’s totally worth what you spent.

Your cousin cheated, but honestly cheating in a game like this he’s only cheating himself. It’s fun because you get to see yourself get stronger, get to do things you couldn’t do before, do things faster, etc. By jumping straight to the best possible, he lost any sense of progression and he will quickly lose interest because the game has nothing left for him.

That said, there’s not really anything that can be done to prevent cheating since this is an offline game. If he plays in the battle arena he’ll probably get shunted into the cheaters’ section so he’ll only be playing against other cheaters.

I know some friends who cheated on this game since they are actually the one who introduced this game to me but I chose not to use it because no FUN and CHALLENGE at all. You will feel the real fun at any game when you find great items after working hard at farming, thinking of better build for your characters, and kill other non-cheater player in PVP.

So its better to play 12hrs a day to get stronger than building them in few minutes then close/uninstall the game since there’s no challenge anymore.

Playing a game is to have fun. where is the fun if you could get everything u could have in just one day?

If you planned on having fun, supporting the devs is the least we can do.

IF you are talking about catching up. i’ve been playing for as long as this game been out. how do you want to catch up to me? game progress?

We playing games for fun, if your cousin cheating, and he think cheating is fun, that is him, not you. IF for you play FAIR are more FUN and CHALLENGE then, do not use CHEAT
Cheating also can make your data corrupted

It’s simple really, for example, I played Borderlands 2 legit, spent hundreds of hours on it, enjoyed it all the way. Got Borderlands Pre-sequel, decided that I knew the mechanics and stuff so I decided to f*ck around and cheated the game instead, after 4 hours, I got bored shitless. I ended up not playing the game I bought. Cries a lot

Lesson: Enjoy the game through playing it how the developers intended it. It’s hard for a reason, the feeling of getting the reward is awesome as f*ck. If you want to cheat on a game, prepare to get bored REAL fast. And on that note, I played for 4-ish months and still haven’t gotten a frigging Vaccus Bow. And if I ever get it, I’d be batshit happy.

Oh and besides, cheating has a high chance of getting you banned from the Arena and the Campaign Rankings, so basically, they’re fked. Sorry about the language on this post, I just woke up with a megaton migraine. Lol.

That right, really right.
But sometimes, the ‘who’ are can’t grow stronger ( almost in rpg games ) will do cheating and they said cheat if fun because can beat another players and be strong like no one can beat them :3…

And they end up whining when they get banned, honestly though. Lol. Be the best with your own powers, then you can really be proud with yourself. Cheating your way to the top just means you’re not only fooling others, you’re also fooling yourself.

Besides, DQ’s not a hard game once you get used to it, I don’t have the optimal equipments but I still wreck major sh*t. It does take time though, for understanding everything about this game, and farming everything you need. But that is the major point of the game, FARMING, spending your time in the dungeon trying to get all the rare legends you need. If you don’t want to farm, why do you even play? Well that’s just my 2 cents about the matter.

my experient during playing on battle arena. encounter with legit player is more harder and to be honest cheater are easy to kill. From there u can see the different between hard earned item,resource such as CS and MS and time consume to farm to craft make legit player have experient and knowledge. while cheater is just poor faggot with alot resource. thats all they got.

just let him cheat, in arena all players /character is scaled down, my friends cheated this game but they cant pass legend league, i dont cheat and i manage to get to ethernal league and got the 1st place 4times, and bcoz they cheat they dont need to farm, they missed the chance to get extremely rare legendary items like Vacus. S bow, ragnarok, nadroji,
they always ask me where did i get that 100%WD Of my bow, i always answer them that they can get it from ruby hahahahahahahahahaha

But still need to do alot of farming for cs/ms

Cheaters are fun to have for bragging rights, though.

When I beat a cheater in arena, my face lights up. Almost every cheater I encounter, I beat. They usually have no skill or hectic gear.

been playing this game for 3 weeks. i farm hard and hit top 20 of eternal league. meanwhile all cheaters are stuck in mythic league. cheers

Not all of cheaters are weak… I faced one of them in arena and I was shock about my damage dealt it was only 4.
When I checked his item so far differences from mine… I hope cheaters is not allowed in arena and also dq can easily track cheater

what that cheater Id.? ive build that actually very tanky and can absorb most damage. and make damage deal to me like 0 because it can keep healing. but if u encounter a cheater and have prove of it. please screenshot and post it to cheater/hacker thread, steiger will check it, and ban if the user is cheating.

I forgot his id and don’t have screenshot cuz my tablet is suddenly shot down, battery empty… Next time I take screenshot those cheater … Back to floor need to farm, need to try builds

Hi I’m new here and I would like to give my experiences with this game here because I think it seems relevant. I play a wizard as my main and have been playing a little more then a week. I jumped right in diving into this vast world of affixes and procs. At first I used a summon/command build with a sword in arena. I got to mythic league within my first 5 days of playing this game with this build, and currently am ranked 9th-10th in mythic league. I still get killed by little nub rogues with bows but hey who doesn’t? Right now I have switched my build to use an orb(tele) as offhand and a sword as my main hand and have since advanced up to 10th place steady with this build and have only spent 20 bucks. The moral of my story is that there is something cheaters will never have and that is skill. And man I am living proof that skill is all you need. Nuff said enjoy the game 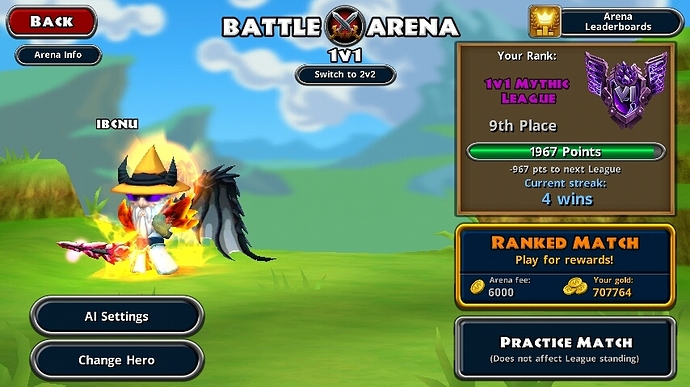 I really like this prismatic/reactor build with bewildering and freeze chance with my offhand. Mad cc. Orb > all lol don’t worry about cheating man just make a troll build like mine haha I just Tele around the map and throw orbs everywhere until people run into them lol

Well, one can cheat how much they want in PvE. That´s her/his business IMO. If that´s how they enjoy the game, okay, just go on. But the only problem I can see is in Arena, where you face “non-cheaters; legit players”, thus making it unfair to these kind of players, even if a non-cheater manages to beat a cheater. I think, it is a good idea to put Cheaters/Hackers in a separate Arena Ranking. There they can fight for the “No. 1 Cheater” Title how long they want.

I´m playing this game since it was released. I´m a dedicated farmer. I would never cheat, because it just takes the fun away. It just feels awesome to work on things and see how you progress from time to time and “build an empire”. Like, “started from the bottom, now I´m here”.