Adding group "parties" to the game with multiplayer

I’ve asked this in the official survey, but I really want this feature, so I espect you guys to give your opinion on this.

So, the main idea is to have parties to invite your friends to play CO-OP and Arena games. This may imply that parties could join games that would invite online members of the party to join in.

This feature could also mean that there would be bigger dungeons and huge bosses for parties to take on.

Dungeon Quest is an offline based game, so this features are probably not going to be implemented.

On the other hand what could be implemented is playing against an AI toon of your friend or having your AI toons battle each other.

@PeaceDog would love online multiplayer. Mostly so that some kind of trading system could be developed. I have 6 toons full of premium & crafted gear I’d like to offload rather than sell or convert. Some I would like to give away to new peeps, some trade. Loved that feature in Diablo series.

Real multiplayer is unlikely too ever be implemented with in dungeon quest because the devs would like to preserve it’s offline-ness but I do like the idea and I’m sure it’s something they’ll keep in mind for future titles!

Well they asked if there should be an online feature in the game in a survey. Why?

And again, this would just add to the game, not affecting the offline-ness as you said.

I think I’ll make a post to give out the reasons why this game needs Multiplayer.

Is Shiny Box making another title?! Another loot based game?!

That might be why they asked questions as such in the survey!

No as stated in the preamble of the survey it is for a follow up title to dungeon quest not for dungeon quest itself dungeon quest is always going too be prioritized as an almost entirely off line game but that can’t necessarily be said for future titles from the amazing people at ShinyBoxGames!

The statement at the beginning of the survey: 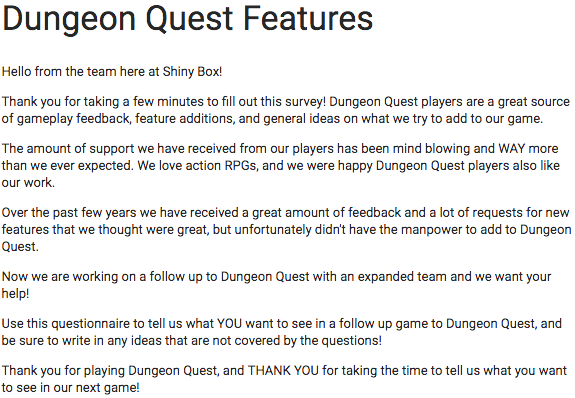 I got $20 burning a hole in me pocket for the next Diabloesque title I find on App Store. DQ has held my attention longer than any other app, largely because of the loot system + crafting + game mechanics. Looking forward to more from SBI.

Ahhh! I’ll still post my thing about why DQ should have an online feature, but with slight changes. I’ll post it tomorrow though, since I cannot post any more topics today.

Thatd be great… Awesome… Its great to have fun with friends and not just urself, it adds to the exitement… And i dont think it will ruin the offlineness in the game hahah thats my opinion ofcourse

Here: Why ShinyBox SHOULD add an online feature to their current game

Somethimes it looks like I am ranting, but I really am not. I am just giving my opinion on the subject.