Advice please how to make stronger 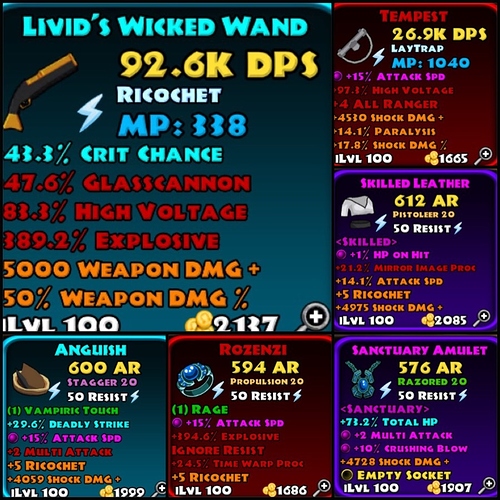 image.jpeg900×900 244 KB
looking for advice on how to make it stronger, she is like a machine gun right now and pushes out really good dmg but I was wondering if I was able to change out the pistol for a bow? And of course the right talents of it would be as strong or stronger?
cronos4321 December 2, 2015, 7:37am #2

Just some survey before i recompose your build.
1.What is the regular/Standard and the spike damage it deal.?
2. Do u prefer gun or any weapon is not a problem for your build.?
3.What element u prefer.?
4. Are u lazy player (only spam primary & stationary in 1 place shotting) or u are hype player that keep moving and changing spot.?
5.What this build actually for PvE 100% DPS, PvE 100% DPS or semi.?

*After u reply it, dont expect to get the recipe right away. it will need few hour or a day to make and do counting before gettin final recipe.

With stagger you don’t need paralysis, the +15% attack speed isn’t really needed. You could put in some better affixes. Even if it looks like your dps is going higher its not really. Sure if you were shooting continuously at a target for 10+ seconds you’d do more dmg but this game rarely has enemies survive that !ong, its better to have higher dmg than higher attack speed, especially since the baseline for pistols is 5attacks per sec. The mirror image and timewarp proc are also not ideal. I’d almost kyanite them off and replace with epic affixes like +5000 dmg or +20% dmg. Vamp touch doesn’t seem to have any synergy with your gear and I dunno if I’d use crushing blow but you do have some synergy with explosive there.

Also, are you capped with crit % and crit dmg? I don’t see any on your gear and it would be a shame to waste that deadly strike crystal affix. Deadly strike only happens after a crit and scales with crit dmg,so its doubly effective to max those stats.

I was also looking at the 1.8 pistol build that doesn’t use the crit dmg