Any builds for cosmic power?

I have a cerebus pet with the cosmic power set affix. Are there any good builds that uses this affix? The pet has good affix rolls but I don’t current have cosmic power in my builds and haven’t seen any builds on here that use it. I’m thinking this would be more useful in pvp since the hp and resist affixes are wasted in pve. 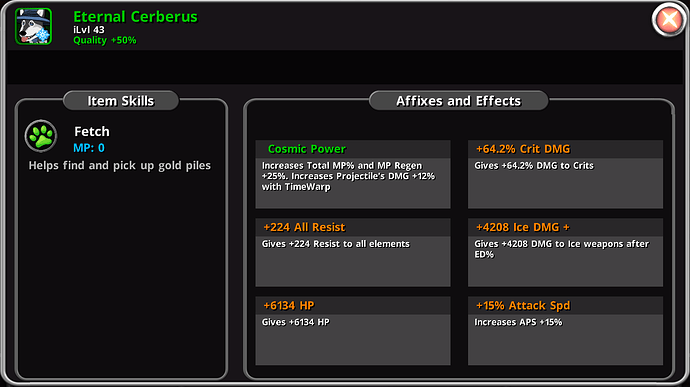 I’m still using this from way back by f00kee for PVE. Of course I changed some affixes that’s more PVE oriented, like those immune affixes to Item Drops%, and some offensive affixes like Crushing Blow. I’m also using this as my main toon as I dislike playing my main as a dog. His/her build can go well over floor 1,500 I guess, since I’m at 1390 and I’m only having trouble with bad affixed Legend/Mythic monsters.

Anything projectile that works very well with Timewarp.

Orb used to be a good choice but it’s no longer projectile but there are other choices.

So no natural wizard skills?

Well Timewarp would definitely work with skullshield , skulldraga , anything that shoot projectile. Fury could count . Also skill like pierce , barrage and comet.

Hmmm. I think I’ll just park this pet next to my eternal slime pet and hope they keep each other company…

What about elements? I stopped looking at the pet affixes after I saw it was a slime but just in case the affixes are good, is element affix any good? My thinking is if I don’t have any element damage modifiers for elements beyond my main weapon the damage would be negligible.

You can use this for Alchemy, manashield or BM build in pvp

Any tips on alchemy build? I tried it combined with harmony, drudic, cosmic power and 3 crystal regen affixes but it still wasnt effective

I think the ‘Immortal Build’ use alchemy or Equivalence to make sure you draw so many times and maybe some Regen or something. one can figure out by testing much.

I was almost sure its alchemy but i couldnt find other needeed affixes as it still wasnt good enough, maybe i ll try equivalence and see how it is

I guess it’s too bad this has plus hp instead of plus mp.

Has anyone try a Full Reflect Build on Wiz ?

Is cosmic power still good for the builds listed above even if I don’t take advantage of the time warp bonus?

I guess I already made it having 120k Armor and 98% DMG Reduction (PVE Stats before going PVP) . But sad to say, you can’t be immortal forever when you fight many draws

Hooray! You just gave it away.