Any wiz builds for farming and for beginners ?

How to progress effectively at the very beginning of the game [The Duct Tape Build] [Hybrid PvE/PvP]
Griffin December 2, 2016, 10:51pm #2

this is in no way meant to represent an endgame buil…

Even i get like sword with same name is it possible to turn it into legendary?

Ok and one last question when u get to like floor 150 u get better mythstones and crystal stuff ?

Ty griffin for helping me! 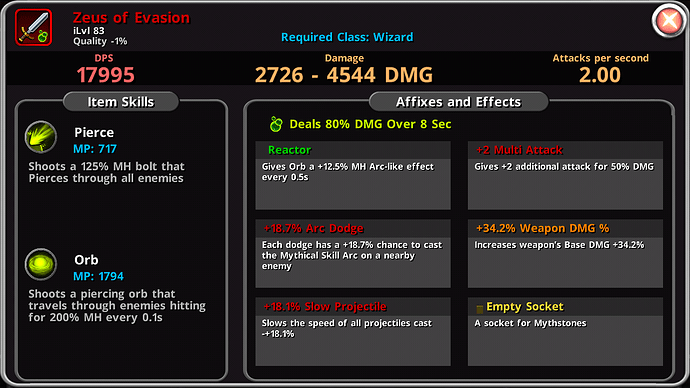 @Fuka you can use Beryl crystal to change the nature of the item. If you want “of greed” , use beryl to roll it.

Either equip all 4 pieces of gear with Reactor affix or find a Nadrogi amulet and/or ring at floor 100 epic+ enemies, or add a slot to a ring and/or amulet & insert Elixir mythstone, or find Frightenimg choker amulet at floor 200 Legend Difficulty then use Jasper to make it Wizard gear.