Are my eternal pets (PVP) viable?

hi guys! i got 2 eternal pets yesterday, 1 as random drop

but i dont really know if they are viable for builds, especially pvp.

pls help, any suggestions about what to do with the pets are appreciated

i have a warrior rogue floorgrinder setup at floor 2400 so i mainly want to use those pets in pvp. maybe for a warrior tank for 2v2 or even 1v1 with fauns gift?
and i have no clue about the wizard pet…
but every build idea is appreciated!

also, would be great if someone could give a general guideline of “which pett affixes suck (arena)”- probably complicated as hell but worth to ask

have a good day fellas

you’re on the right track with the Faun’s Gift for Spark & Heaven because of the Luck affixes and the Warrior Talents.

the good thing is that you can level up your Eternal Pets until the affixes are maxed out (can’t do that with any other Eternal Items). the bad thing is that you can only use Calcite on them to change their Element. for the Slimes, the Element Boost doesn’t change, but any Element affixes will change. so for the Eternal Heaven, if you wanted it to be Shock, the Boost Arcane stays Arcane, but the +10,000 Arcane dmg & +800 Arcane Resist will get changed to Shock. also, using Unity Mythic will cause all your Resists to be as good as your Shock Resist (if using Unity, make sure all your Items & Pet are the same Element)

is the Wizard Pet also Eternal? with the Prismatic on there, you might also want to use Amplify, which gives more damage the more Elemental Debuffs that are on an enemy. and Command is also a Wizard Skill. this will improve your Command Summons Heal and give it Taunt.

Pet affixes are the same as Item affixes, so affixes that suck in arena for one suck for the other. as a general rule, % Weapon Damage & % Elemental Damage are less effective than using the flat + versions. with 7 +5000 ED on your PVP Build, you get +7280 (I think I did that right) damage in PVP. you should only use the flat +WD if you have the space for it, and only on the weapon you use most for causing damage. just about all other affixes can be used in PVP, but how good they are depend a lot of Set affixes being used and any other thing that makes an affix either better or worse to use.

an example of an affix not to use: Adventurer Set can’t be used, as enemies in PVP don’t drop Gold.

there are a bunch of posts on the subject, hopefully a Search

will help find the info you are looking for.

lastly, those are nice Pets. Welcome to DQ Forums, @Rodolf !

thanks for the detailed answer! i’ve read some pvp guides but it was a long time ago

definetely gonna check some out these days!

so i wanna make this heaven work.
thing is, is it even worth to use angelic with hammers because they are so slow anyway? 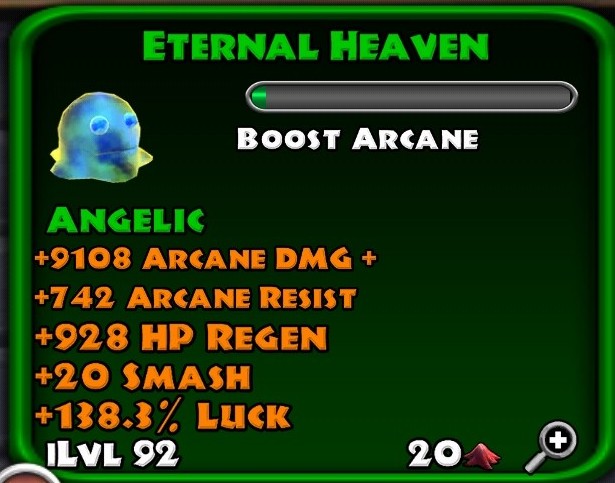 sounds like it could get decent with the other affixes

Smash having a slow 1.1 APS does suck, but it does have some things that can make it a powerful Skill to use.

it has a Taunt that draws nearby enemies close to the Warrior so that it can get hammered. add +2 Multi Attack for more damage.

when you put Skill Points into Smash, it does more damage, has a chance to stun, increases the damage done by Critical Damage by a lot, and reduces the cost of casting Smash.

60+ Stat Points into Power and a high crit chance & crit damage are a must.

since you are taunting enemies to you, using Earthshatter and/or Torrent for more damage is really nice.

another way to go is using Discordance Mythic. put Multi Shot Skill on the Hammer so that Smash will do 1050% Weapon Damage every 3 seconds. Smash 40 is 3150% weapon damage.

just some thoughts. of course, the numbers will be lower in PVP… I thought about this for PVE actually.

very cool thoughts my friend. i appreciate it and will draw some inspiration! and also cheers to you for keeping the forum alive <3

i will try to make a warrior 2v2 build with this and also a 1v1 build. it will take quite some time tho i guess.
my concept would be something like this (i found another cool heaven with critchance,critdmg,deadlystrike,dodge,resist… if it had attack speed instead of resist i’d jump out of my chair i guess):
2 more or less defensive-offensive balanced characters, warrior and rogue, both using at least 1 part of angelic set to heal each other? warrior with unity, alchemy, maybe druidic, zealotry, fauns gift.
rogue with pathfinder (because dodge on the pet).
rogue most likely with bow or pistol then, MAYBE chakram, warrior with hammer+shield because zealotry.
so in theory the warrior would be more tanky ofc and the rogue more offensive.
this way i would make use of every affix i got on those pets except for the Resist on the Rogue… cant be tooo bad?
in forum some people say angelic sucks for ally healing in pvp but ive seen some guys in leaderboards use it so i quite dont know xD

1 more question i couldnt find the answer to in a quick search…
does the zealotry bonus (from the armor, “50% all healing” also work if i heal my partner?)

even now there are still tons of possibilities but i have the urge to craft some really good builds with some time. just hope to not go into a direction which can only end up mediocre at best

so if anyone has thoughts feel free to tell me

one of the cool things about DQ is all the options, but lots of them need to be tested. as far as the Zealotry Bonus, you might need to test that to see if it works.

one reason Angelic Heal doesn’t work so well in PVP is that most Set affixes in PVP Builds are Set Affix (3) on top of Characters & Items are level 20ish, so not as effective as in PVE. considering there are better ways to heal, but if someone had a good idea for a build using Angelic Healing…

a lot of players are waiting for new content from the developers, and have been playing for years, and some have gone on to other games (hopefully only for a short time). I like sharing what I know with new players, because “this game is crazy cool!”

Eternal pets are viable if they suit your build but you may to adapt your build to the pet. Does that make sense?

sadly i am not that experienced, especially at pvp, but i keep playing and reading almost every day

at the moment, im struggling to decide which bases i wanna use for a poweful legend affix or 2.
im missing OH, armor and helmet.
the plan is to make an off-tanky kinda warrior build adapted to the Eternal Heaven i posted…

also i dont know if using harmony and unity will be worth it. but it looks like i only have 1-2 mythic slot left.
this is what i have for now:

armor - ??? with ruptured or alchemy if unity on ring, fauns gift set

ring - stone of nadroji (if divination amulet) with alchemy or unity, permafrost set

not much, but i already read stuff about different set- and other affix possibilities which are not implemented till i tested and know which bases i wanna use…

if u want u can help me to adapt my build =)

Use calcite to change the element attack and resists to lightning. Why ? Well everyone in pvp uses lightning

I’m still using Ice, at least until I need to use Shock, if I ever get that far in PVP.