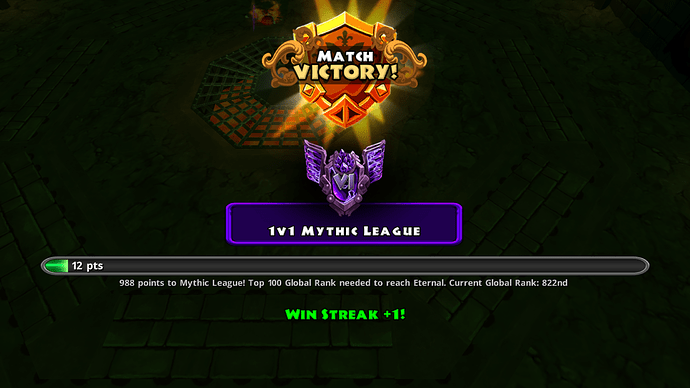 Congrats : D I hope too meet you in eternal one day ;D

Woa, that pretty good in 12 days but eternal league is the true test now

Even tougher goal: Creating a build of your own without using LOHKO, GG, BB, FB, or any other popular build as a base.

I’ve been playing for 12 days. I don’t know any builds. I kind of just wing it.

BB/FB?
The best things in arena is stealth and sanctuary. I needed to put vanish on my OH but hit eternal without it so I didn’t bother.
I also feel like most builds are already out there. There isn’t many variations to be made aside from the element, more or less tank, blood magic vs recources. This is all for pvp of course.
Me for instance, I made a rogue with sanctuary, blood magic (mistake), and fire damage/crit/crit damage/at speed. No bleeds or ele. Crit. So that falls into a generic build of something already made.

Congrats Mate!!! I was just disapponted when I finished mythic league just to find out that I still need to climb up the top “100” of the game ):<

Yeah, that was a bit of a bummer. But a major goal!

Hehe I might have done that although I used blistering and ed% as well as inferno and vampiric touch from lohko but for a completely different purpose. No discordance or anything though.

My build focus on packing as much dmg affixes as possiblr including defiant dmg boost to make one meteor do huge dmg like 20k plus all the bleeds and fire dots and proc crit dmg in a second or two. I sometimes beat 165k hp wihout kuch effort. 120k hp destroy but sanctuary still has more hp. My builf way better than a lohko in terms of moving but not dmg. Hell clogon is easy but hard at same time and I dont like copying a build. I just use things from a previous build and use it for a completley different purpose. No extra hp needed except plagued and vampiric touch and stealth is why I won so kuch especially against clogon. Coat and procs my other deadly point of the build. Once my highest bleed was 39k from single meteor with the 20k strike and 10k dmgs of procs. Very good against blinkers as well and only weakness is sometimes emman or clogon if I slip up. All an all, I win so much and find ppl so easy even if it isn’t one shot. Fear and taunt very powerful against clogon and steakth too as well as coat and dmg buffs. Anyway I will be testing the arc mythic soon and see what the difference is between bombard and see if I win more. It seems very strong for 350% MH dmg per 0.2 seconds.